(Minghui.org) Zhou Yan, born in 1967 of Han nationality, is a member of the Chinese Communist Party (CCP). He once served as the executive deputy secretary of the Political and Legal Affairs Committee in Dalian City, Liaoning Province.

For years, Zhou has been the chief perpetrator and executor of the persecution of Falun Gong in the political and judiciary systems in Dalian.

During his tenure as president of the Dalian Intermediate Court, the court followed the policies to persecute Falun Gong. They prevented lawyers from defending Falun Gong practitioners and sentenced many innocent practitioners to prison.

According to available statistics collected by Minghui.org, between January 2015 and October 2021 when Zhou Yan served as president of the Dalian Intermediate Court, at least 196 Falun Gong practitioners were sentenced in the courts in Dalian, following the top-down persecution directive from the higher court. 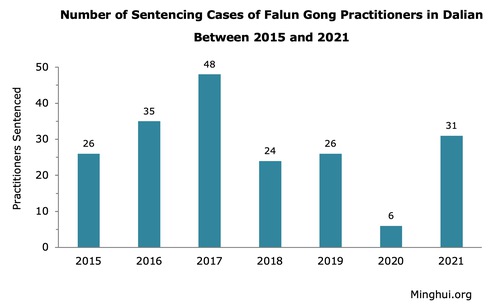 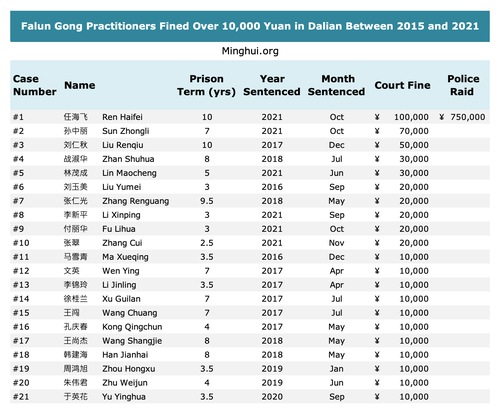 Below are selected cases.

Case 1. Mr. Zheng Decai passes away not long after release from prison

While in prison, Mr. Zheng was severely tortured despite his age. When he was released in August 2019, he was so weak he could hardly walk. He also had difficulty eating. Mr. Zheng passed away on November 21 that same year. He was 84.

Before he died, local village officials and police officers continued to harass him and confiscated the photo of Falun Gong’s founder from his home.

Mr. Liu Renqiu was seized on June 28, 2016, during a mass arrest of practitioners ordered by the Liaoning Provincial Political and Legal Affairs Committee. A police officer wearing boxing gloves punched Mr. Liu in the abdomen and chest, causing serious internal injuries and blood in his urine.

The police searched and ransacked his place, confiscated his personal belongings, and froze his online bank account. Almost all of the 400,000 yuan in his account was withdrawn without his family’s knowledge.

Mr. Liu appealed to the Dalian Intermediate Court, but the higher court upheld the sentence because Mr. Liu refused to renounce Falun Gong.

That same day, Ms. Sun Zhongli from Dalian was also arrested and her residence ransacked.

After being detained for over a year, the two practitioners appeared in the Ganjingzi District Court on September 8 and again on September 23, 2021.

Mr. Ren was sentenced to ten years in prison and fined 100,000 yuan, while Ms. Sun was given seven years and fined 70,000 yuan. They are now appealing the sentences.

This was not the first time Mr. Ren was persecuted. He was arrested in 2001 for talking to people about Falun Gong and sentenced to 7.5 years in prison, where he was cruelly tortured.

Case 4. Four practitioners sentenced, including one for 9.5 years and a 20,000-yuan fine

Mr. Zhang, Mr. Wang, and Mr. Han appealed against their sentences, but the Dalian Intermediate Court upheld the original verdicts.

Mr. Du Yongfeng from Xingshutun Town, Dalian City, was arrested by Pulandian police on July 11, 2021. They ransacked his home and seized all printers, Falun Gong materials, and other items. He was later sentenced to nine years in prison.

Mr. Xu Qiang was arrested during a police sweep on July 11, 2020. He was sentenced to nine years and one month in jail.

Mr. Ding, a 50-year-old math tutor, and Ms. Yan were arrested and had their home ransacked on July 10, 2019. Ms. Yan was released on bail in the evening, but Mr. Ding was held and tortured in Dalian Detention Centre. As a result, he suffered cerebral hemorrhage and lost hearing in both ears. He was released on bail on October 1 in the same year.

Mr. Ding’s condition improved after he returned home by studying the Falun Gong books and doing the exercises. However, the local police and personnel from the judiciary department kept harassing him. The pressure took a toll on Mr. Ding’s health

On January 27, 2021, he suffered a second hemorrhagic stroke. He was unconscious and had to be taken to an emergency room.

After he was first detained in 2019, his wife called his students and their parents, telling them that he could not tutor anymore because the police had taken him away. Some students were so upset that they started to cry.

A student’s father said to Mr. Ding’s wife, “My son is in tears. When his mother told him to sign up for a different class, he said, ‘I could never find another teacher as nice as Teacher Ding! I don’t want to change! I only want Teacher Ding to tutor me!’”

Ms. Liu Xinying, a nurse at Dalian Obstetrics and Gynecology Hospital, was taken to Liaoning Women’s Prison on March 24, 2015, to start serving her 5.5 years.

Ms. Liu was arrested on March 21, 2014, only one month after her husband Mr. Qu Hui passed away. He had suffered for 13 years after torture in Dalian Forced Labor Camp in 2001 left him disabled. His genitals festered after being shocked with electric batons, and his cervical spine was fractured, leaving him with high paraplegia. Ms. Liu cared for him for the next 13 years until he passed away on February 29, 2014.

Ms. Liu was tried in the Zhongshan District Court on September 29 and sentenced to 5.5 years. She appealed with the Dalian Intermediate Court, which upheld the original sentence without holding a hearing.

Beginning in May 2015, a wave of lawsuits were filed against Jiang Zemin, the former head of the CCP and chief culprit in the persecution of Falun Gong. That was when China’s Supreme People’s Court implemented a new “Registration System Reform,” which stipulated that all criminal complaints had to be accepted once received and dealt with according to law.

Falun Gong practitioners and their families submitted their criminal complaints against Jiang to the Supreme People’s Procuratorate, asking it to file lawsuits with the Supreme Court holding Jiang Zemin accountable for crimes against humanity in the persecution of Falun Gong.

Instead of handling the cases according to the new law, the CCP started to round up practitioners who had filed criminal complaints against Jiang.

Ms. Yuan Xiaoman was detained in 2016 for doing just that. She refused to give up her faith in Falun Gong and was prosecuted.

Ms. Yuan appealed to the Dalian Intermediate Court, which ruled to uphold the original judgement on April 26, 2017.

In addition to ordering the courts under his jurisdiction to sentence Falun Gong practitioners, Zhou was also behind several propaganda campaigns to smear Falun Gong.

Prior to the “Summer Davos” held in Dalian in September 2011, the Political and Legal Affairs Committee (when Zhou served as its deputy secretary) ordered local residents to turn in any Falun Gong materials they saw in their neighborhoods and report any Falun Gong activities they were aware of.

At the same time, the Political and Legal Affairs Committee distributed a book to the local residents titled Picture Book for Residents’ Safety Knowledge. Pages 5 and 6 of the 55-page book had defamatory content about Falun Gong. The book was compiled and published by the Dalian Public Security Comprehensive Management Commission and Dalian Political and Legal Affairs Committee. Zhou was the deputy director of the editorial board.

When Zhou took the post as president of the Dalian Intermediate Court, district courts in Dalian published numerous articles on various websites to slander Falun Gong.

After Falun Gong practitioner Ms. Sheng Jie was sentenced to 7.5 years in prison on December 22, 2017, by the Lushunkou District Court, she appealed to the Dalian Intermediate Court. The higher court ruled to uphold the original verdict in mid-March 2018 after learning that Ms. Sheng refused to renounce Falun Gong.

On July 24, 2018, the Dalian Evening News and The Peninsula Morning Post published an article titled “A Woman Sentenced for Propagating Falun Gong in the Lushunkou District,” using Ms. Sheng as a negative example to mislead the public, while covering up how the police, prosecutor, and judges violated the law at every step of the legal process in order to sentence Ms. Sheng.

Ronald Dworkin, a famous scholar of U.S. constitutional law, once said, “We are subjects of law’s empire, liegemen to its methods and ideals, bound in spirit while we debate what we must therefore do.”

Together with the legislative and executive branches of government in the U.S., the judiciary “balances power” to maintain a stable society of law and order, a fundamental bedrock of modern civilization.

In individual cases, judges are given extraordinary power and responsibility to determine a person’s fate. But when it comes to more significant cases that concern the fate or the future direction of a country, whatever decisions judges make will influence everyone’s lives in that country.

Throughout history, when a country falls into the hands of tyrants, judges are often turned into tools of suppression to advance the interests of the ruling class, abandoning their sacred duty to uphold justice and maintain checks and balances.

After over 70 years of Chinese Communist Party rule, most of the judges in China have become rubber stamps for the government. This is especially true in the now 22-year-long persecution of Falun Gong, in which judges have played a major role in convicting innocent practitioners who stay firm in their faith.

According to information collected by Minghui.org, at least 70 judges who have participated in the persecution of Falun Gong have died, most at the height of their careers. Some were struck by lightning, some died of cancer or other terminal diseases, some were in major car accidents, some fell to their deaths, and some were shot to death. In some cases, even their families weren’t spared.

In traditional Chinese culture, it’s widely believed that premature death or misfortune is often a result of one’s wrongdoing. Such karmic retribution is considered a reminder from heaven not to commit further evil deeds.

Judges who violate their conscience and convict Falun Gong practitioners are not only persecuting good people who merely try to live by the principles of Truthfulness, Compassion, and Forbearance, they are also shaking people’s confidence in law and order and their faith in the divine, leading to a rapid down-slide in moral standards overall.