(Minghui.org) Every Friday and Saturday October 2021, Falun Dafa practitioners held activities in front of the Nobel Prize Museum. They told passersby about the meditation practice and its ongoing persecution in China.

Many people thanked them. “What you tell us is very valuable, and I am so happy to hear about it,” one person said.

Located in central Stockholm’s old town, the museum showcases information about the Nobel Prize—one of the most prestigious awards given to people in numerous fields. Announced each October, the awards ceremony and the museum draws thousands of international visitors every year.

Call to Stop the Brutality in China

Attracted to the gentle exercises and soothing music, many people stopped at the Falun Dafa booth.

One middle-aged couple, along with their child and parents, read the posters. Practitioners told them Falun Dafa is based on Truthfulness-Compassion-Forbearance and is practiced in over 100 countries.

The couple was also glad to learn that Mr. Li Hongzhi, founder of Falun Dafa, was nominated for the Nobel Peace Prize four times. “Thank you for telling us such important information,” the wife said.

After signing a petition calling to end the persecution in China, the couple then explained in German to their parents. A practitioner who spoke German also answered questions. Before they left, the entire family signed the petition. “Such a crime is unimaginable and too vicious,” one of their parents said. “People all over the world need to know what the Chinese Communist Party (CCP) is instead of being fooled by it.”

Two students from China were shocked to learn the extent of the brutality as they read the poster. One said, “Information inside China is censored–we did not know about this until we came overseas.” Both girls said they came to Germany to study and were surprised to see Falun Dafa practitioners.

One girl said she had heard some of the CCP’s lies that defamed Falun Dafa, but she did not know what to believe. “Now I know that the regime always makes up lies to suppress groups it does not like. And all of its propaganda is lies,” she said. “In fact, no one in my family likes the CCP. I really want to tell them about this.” 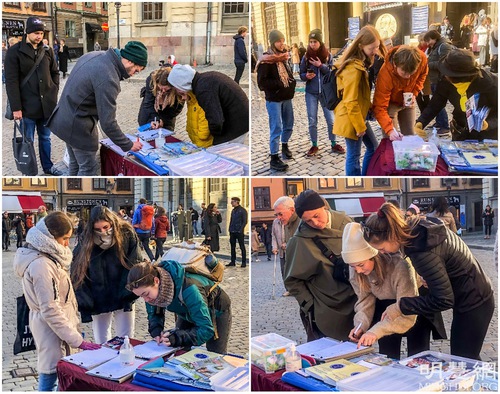 Natalia and her husband are from Warsaw, Poland. After hearing how practitioners are persecuted in China, including having their organs harvested while they were alive, they immediately signed the petition.

Born in Belarus, Natalia went to college there and said she clearly understood the nature of communism. She explained that was why she and her husband decided to live in Warsaw.

Natalia is studying Chinese and said she knows what is going on in China. “My Chinese teacher told me these conversations cannot happen in China because it would be too risky,” she explained.

Natalia said she had a great interest in traditional Chinese culture and was glad to hear what is going there and learn the Falun Dafa exercises. One practitioner suggested she contact practitioners in Warsaw.

One man from Mexico said he had come by the day before (October 29). In addition to taking photos of practitioners as they meditated, he also took a photo of himself meditating. “I will send these pictures to my hometown so everyone can see it,” he said. “I will join the local group practice site and learn this.”

Millions of people have embraced the teachings—which are based on the principles of Truthfulness, Compassion, Forbearance as well as five gentle exercises—and experienced uplifted health and well-being.