For years, Falun Dafa practitioners in Toronto, Canada have maintained a group practice site at the scenic Niagara Falls, which is visited by tourists from around the world. The practice site is open every day and attracts many people. 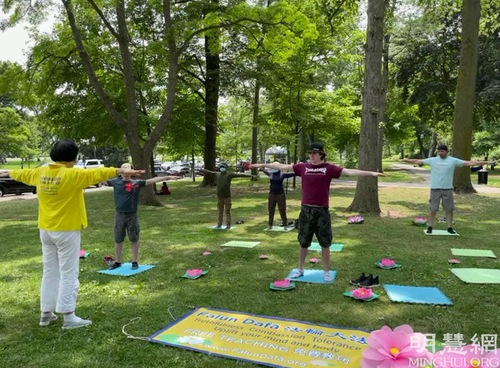 “I Will Definitely Keep Practicing”

When John and his three daughters from Montreal passed by, they were attracted by the melodious music and stopped to watch the group exercises for a while. He asked what Falun Dafa was, and practitioner Jerry gave him a brief introduction. John said, “I’ve heard of Falun Dafa before. Can we learn it?”

Jerry taught them the exercises. Just after John did the first set of exercises, he said, “I feel very strong energy, I can feel energy radiating from my pores.”

John and his daughters learned all five sets of exercises. John said, “Thank you very much. I feel this practice allows us to form a harmony with nature. Your practice site is the best gift for visitors!”

Jerry told them the story of another practitioner, Ms. Wang. She was paralysed but was able to stand up seven days after she began doing the Falun Dafa exercises. He encouraged John to keep practicing. John said, “That’s for sure. I feel this is part of God’s calling, so I will definitely keep practicing.”

He said, “We recently moved to a new house. I will set up a room so my daughters can practice together.”

After learning the exercises, John saw two police officers walking towards the practice site. John greeted them and said, “This practice is so great. The police usually work under heavy pressure. Everyone should come here to practice the exercises.” Both officers smiled and nodded.

Later that afternoon, the head park police officer came to the practice site and said that the police supported the site. He said that the tourists liked it very much and that the practitioners’ presence filled the lawn of Great Falls with vitality and beauty.

Another police officer said the Falun Dafa banner was flown over the Niagara Falls City Hall in May. He also knew the mayor sent his congratulations on the 29th anniversary of the public introduction of Falun Dafa.

“God’s Will Brings Me Here”

Thato came to Niagara Falls with her friend. She was attracted by the group exercise demonstration and told practitioners, “I came to the Falls today. It seems that there is no place I wanted to stop and visit. I don’t know why, but when I passed by this practice site, I wanted to stay. Can I learn the exercises from you?”

“I feel something, but I don’t know what that is,” said Thato when she lifted her hands while learning the first set of exercises called “Buddha Stretching a Thousand Arms.” She focused very intently when she learned the next movements.

At that moment, three young men hurried over and said they wanted to learn the exercises. But they had to leave in a hurry. After they left, Thato continued learning and said she was surprised to feel something revolving inside her body.

Thato introduced herself and said, “I’ve had some experiences while meditating. Once, my soul was separated from my body. I saw my body fly up. I felt I could communicate with the universe. I was very surprised and told my mother and friends. But they all said I was talking nonsense.”

Thato mentioned that she had a lot of questions about the spiritual realm and wanted to know more about it.

The practitioner told her to read Zhuan Falun and believed all her questions would be answered. She thanked her very much. Before she left, she said that her name, Thato, means “God’s will.” She said that perhaps it was God’s will that brought her there to learn about Falun Dafa.

“The Practice Site is Really Wonderful”

Anthony quietly watched for a while and then asked about Falun Dafa. He listened attentively as a practitioner explained. He told the practitioner, “My third eye has been open since I was a child. I can see many scenes in other dimensions that other people can’t see. Sometimes when I share the scenes I saw with others, they are very surprised.”

Anthony said, “When I passed by your practice site today I saw it was really wonderful. It was illuminated with a red glow—something I’ve never seen before. So I really want to learn what Falun Dafa is.”

After listening to the practitioner’s introduction, Anthony said that after he returned home, he would definitely contact the local practitioners and learn to practice the exercises.

Elina from Spain said in surprise as she learned the second set of exercises: “I feel a strong flow of energy.” She wept with excitement and said, “I didn’t expect to have such a strong feeling the first time I did the exercises.”

After teaching her the exercises, the practitioner used her mobile phone to show Elina how to visit the Falun Dafa website and search for free online teaching videos, Dafa books, and other information. She said excitedly, “Thank you! Thank you!”

Free online instruction can be found at https://www.learnfalungong.com/

Falun Dafa (also known as Falun Gong) was first taught to the public in 1992. Nearly 100 million people across China were soon practicing Falun Gong after experiencing improvements in their health and character.

Minghui.org has confirmed the deaths of thousands of Falun Gong practitioners in the persecution over the past 22 years; the actual number is suspected to be much higher. More have been imprisoned and tortured for their faith.

Under Jiang’s personal direction, the CCP established the 610 Office, an extralegal security organisation with the power to override the police and judicial systems and whose sole function is to carry out the persecution of Falun Gong.