Canada’s “Quitting the CCP” centre designated August and September 2020 as “quit the CCP” months. A car parade will be held every Saturday in support of more than 360 million Chinese people who have quit the Chinese Communist Party (CCP) and its youth organisations, and to call on Chinese citizens in China as well as overseas to renounce the communist regime.

An entourage of cars drove through Toronto’s city center, Markham city, the Scarborough District, North York, and Newmarket Town, on the afternoons of August 15 and 22.

A rally and car parade was held in Calgary’s city centre on August 22. After the rally concluded, around 20 cars with messages “Heaven Will Disintegrate the CCP,” “The CCP is the Most Evil Virus Endangering the Whole World,” and “People Are Dying because the CCP Lied about the Virus” drove around the city in circles, starting from Chinatown, then heading to T&T Chinese supermarket in the Northeast district. The parade lasted for nearly two hours. 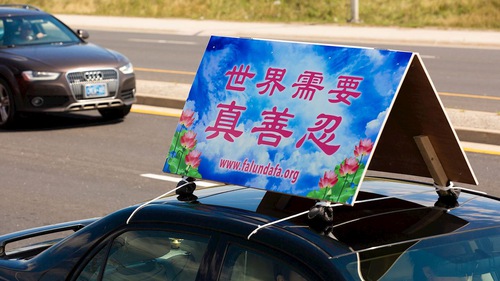 A man in his 50s who emigrated to Canada from Northeastern China walked up to the practitioners after the parade, and said, “I came by to express my admiration, and to say thank you. Thank you for your perseverance, and for all you have done. The situation would not be like that today if not for your persistence. The U.S has taken the lead in sanctioning the CCP. You are truly remarkable!”

“I was blown away by your entourage of cars. I often see your banners when I drive past the Pacific mall. I also see you outside the Chinese consulate. I’ve taken your brochures to read. I am very clear about how terrible the CCP is. The more I read history, the more I realise how ruthless the regime is. It is not only persecuting Falun Gong but Christians as well. I am a Christian. I read the signs on your cars today. I am moved. You have done a great job. I admire your spirit.”

When practitioners explained to him the importance of quitting the CCP, he agreed without hesitation to renounce his membership. He said his wife would want to quit the CCP too.

Mr. Zhao from Jiangsu Province and his friend learned about the event and came to show their support. After practitioners explained to him the purpose of quitting the CCP, he renounced his membership in the Young Pioneers, a CCP youth association.

“Falun Gong practitioners are wonderful people,” he said. “I got acquainted with a few practitioners. They have high moral standards. But in China they are brutally persecuted. I know many practitioners who were and are still being arrested. The CCP’s control is very despotic. It monitors everyone.” He also said he believes heaven will settle scores with the CCP.

The CCP is the Common Enemy of All Humanity

One of the cars had a sign written in Persian. The car belongs to Mohammad Esmaeili, who is from Iran. He explained the reason for the sign, “The design is symbolic, it is from traditional scriptures. It means all Iranians come together and say no to the CCP. The CCP is a demon. Not only is it the enemy of Chinese people, it is also the enemy of all humanity. Therefore, we must join forces to eliminate it.” 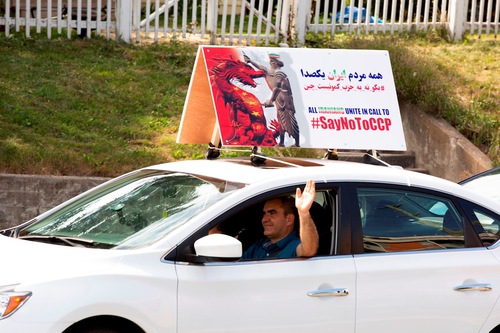