Practitioners of the Chinese meditation practice Falun Gong joined in the festivities of the Nundle ‘Go for Gold’ festival in rural New South Wales, Australia.

The festival, which has been held for over 15 years, attracted more than 16,000 people over a two-day period. The annual festival honours the significant role that Chinese and European miners played in the development of Nundle as a town. 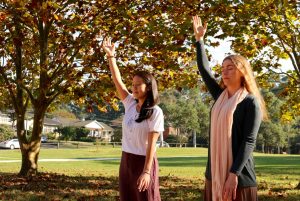 Practitioners had a booth where they demonstrated the standing exercises and the seated meditation. The practice for improvement of mind and body originated in China in 1992. Over 100 million people in over 70 countries currently practice.

The practitioners also took the opportunity to inform festival-goers about the persecution of Falun Gong in China that has been going on since 1999, something many were surprised to hear. Signatures were collected for a petition to be sent to the United Nations protesting the forced live organ harvesting from living Falun Gong practitioners in China for profit.

Keith Le Cornu, a friendly local, tipped his hat and had a good old ‘Aussie’ chat. He showed his support by signing the petition.

Besides demonstrating the exercises, the practitioners also taught the meditation exercise to many who had never tried it before.

The Nundle ‘Go for Gold’ festival was a roaring success with record numbers for this year’s event of more than 20,000. Practitioners plan on participating in next year’s festival.