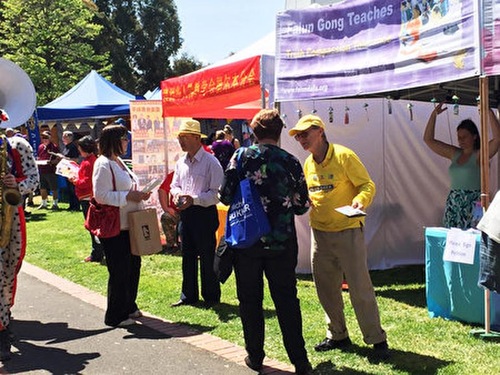 Falun Gong (also called Falun Dafa) practitioners in Victoria, Australia, participated in the annual Spring Festival in the City of Whitehorse, the eastern suburb of Melbourne, on October 15, 2017.

Practitioners set up a booth to introduce Falun Dafa and demonstrated the five exercises. Many people had an opportunity to learn this traditional cultivation practice and to support the practitioners’ efforts to end the persecution in China.

Alexander Johnasen, a college student from Western Australia, wanted to learn more about Falun Dafa. When he heard that thousands of people were being persecuted by the Chinese Communist Party, he said, “I’m against communism. People should have freedom of belief even in communist countries. It’s terrible for anyone to infringe on freedom.” 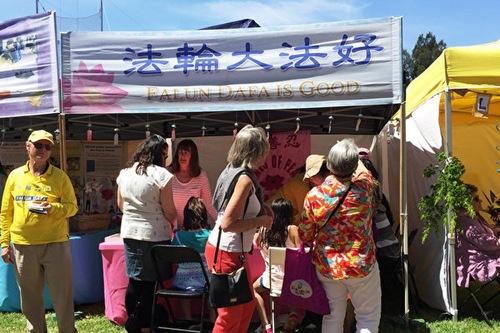 A practitioner explains the benefits of the practice at the Whitehorse Spring Festival.

Mr. Zion Lo from Hong Kong is a strong supporter of Falun Gong. He expressed his profound sympathy for those affected by the persecution. He said, “One of my friends in mainland China has been thrown into prison for practicing Falun Gong. Truthfulness-Compassion-Forbearance is beautiful! We should give them a helping hand.”

The Parikh family from India talked to Falun Gong practitioners for a long while. Mrs. Parikh said, “I hope to learn more about Falun Dafa. I will read the flyer when I get home. I think it’s a very peaceful practice and very beneficial for one’s health.”

Mr. Parikh said, “I don’t understand why the Chinese Communist Party doesn’t allow people to have their own belief. That it suppresses belief is shocking. A government should work for the benefit of the people instead of suppressing ancient culture. They should learn the benefits of the belief, where the belief comes from, and why it exists so that they will respect people’s belief and protect the culture. The Chinese Communist Party destroyed traditional Chinese culture during the Cultural Revolution!”