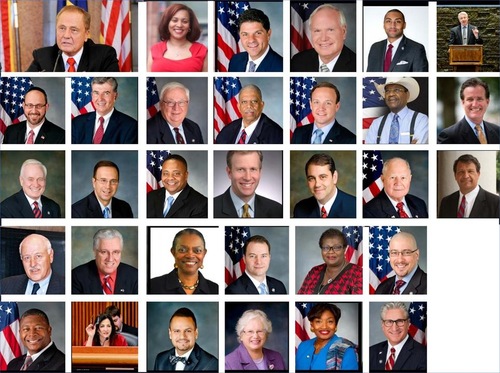 More than 100 proclamations have been received this year from the New York state, county, and city officials honoring Falun Dafa being practiced for the past 25 years. These proclamations also declare May 13 as the 18th World Falun Dafa Day.

Falun Dafa, also known as Falun Gong, was introduced to the public by Mr. Li Hongzhi on May 13, 1992. Based on five sets of gentle exercises and the principles of Truthfulness-Compassion-Forbearance, this meditation system is now well received in more than 100 countries, with teachings available in more than 40 languages. More information can be found at www.falundafa.org. 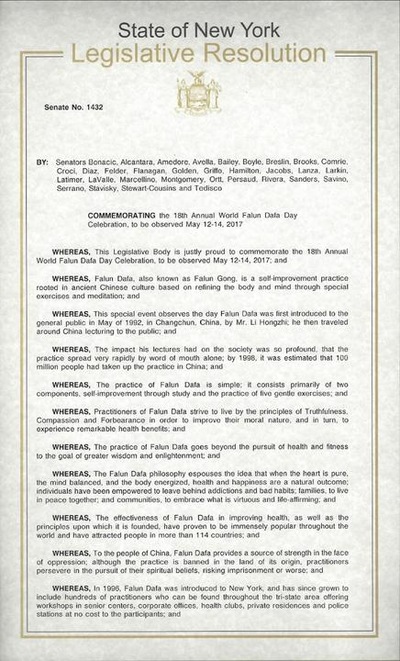 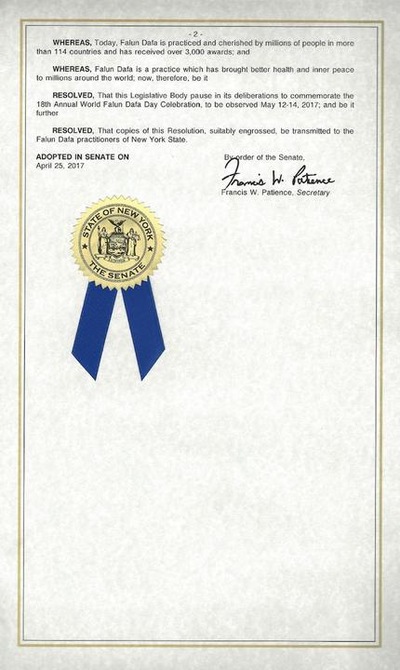 Below is text of the New York Senate Legislative Resolution J1432:

WHEREAS, This Legislative Body is justly proud to commemorate the 18th Annual World Falun Dafa Day Celebration, to be observed May 12-14, 2017; and

WHEREAS, Falun Dafa, also known as Falun Gong, is a self-improvement practice rooted in ancient Chinese culture based on refining the body and mind through special exercises and meditation; and

WHEREAS, This special event observes the day Falun Dafa was first introduced to the general public in May of 1992, in Changchun, China, by Mr. Li Hongzhi; he then traveled around China lecturing to the public; and

WHEREAS, The impact his lectures had on the society was so profound, that the practice spread very rapidly by word of mouth alone; by 1998, it was estimated that 100 million people had taken up the practice in China; and

WHEREAS, The practice of Falun Dafa is simple; it consists primarily of two components, self-improvement through study and the practice of five gentle exercises; and

WHEREAS, Practitioners of Falun Dafa strive to live by the principles of Truthfulness, Compassion and Forbearance in order to improve their moral nature, and in turn, to experience remarkable health benefits; and

WHEREAS, The practice of Falun Dafa goes beyond the pursuit of health and fitness to the goal of greater wisdom and enlightenment; and

WHEREAS, The Falun Dafa philosophy espouses the idea that when the heart is pure, the mind balanced, and the body energised, health and happiness are a natural outcome; individuals have been empowered to leave behind addictions and bad habits; families, to live in peace together; and communities, to embrace what is virtuous and life-affirming; and

WHEREAS, The effectiveness of Falun Dafa in improving health, as well as the principles upon which it is founded, have proven to be immensely popular throughout the world and have attracted people in more than 114 countries; and

WHEREAS, To the people of China, Falun Dafa provides a source of strength in the face of oppression; although the practice is banned in the land of its origin, practitioners persevere in the pursuit of their spiritual beliefs, risking imprisonment or worse; and

WHEREAS, In 1996, Falun Dafa was introduced to New York, and has since grown to include hundreds of practitioners who can be found throughout the tri-state area offering workshops in senior centers, corporate offices, health clubs, private residences and police stations at no cost to the participants; and

WHEREAS, Today, Falun Dafa is practiced and cherished by millions of people in more than 114 countries and has received over 3,000 awards; and

WHEREAS, Falun Dafa is a practice which has brought better health and inner peace to millions around the world; now, therefore, be it

RESOLVED, That this Legislative Body pause in its deliberations to commemorate the 18th Annual World Falun Dafa Day Celebration, to be observed May 12-14, 2017; and be it further

RESOLVED, That copies of this Resolution, suitably engrossed, be transmitted to the Falun Dafa practitioners of New York State. 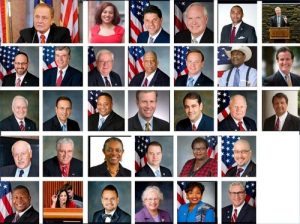 Initiated by John J. Bonacic in the 42th Senate District, this resolution was cosponsored by 31 senators and then passed unanimously.