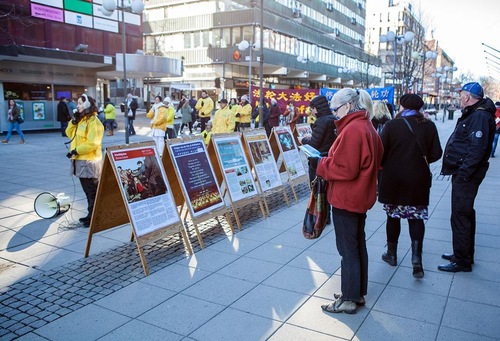 Södertälje, located about 12 miles southwest of Stockholm, is a beautiful city and well-known coastal resort, as well as an important transportation hub. 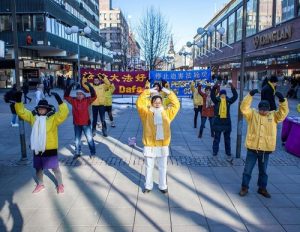 Falun Gong practitioners demonstrate the exercises at the downtown square in Södertälje, Sweden.

Melodious music and a peaceful exercise demonstration drew the attention of passersby. Many paused to watch the demonstration, read the posters, and sign the petition opposing the persecution and forced live organ harvesting atrocity.

Some passersby were interested in learning the exercises, and signed up to learn in future free sessions. Some learned on the spot. Many expressed hope that Falun Gong practitioners would visit the city more often, and set up a practice site. 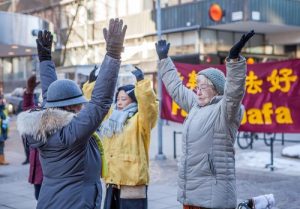 Some passersby learned Falun Gong on the spot.

One middle-aged lady intently watched the practitioners demonstrating the exercises. She said to a practitioner, “Human beings do not only need nutrition. Actually heart and spirit are more important. Without a proper supply of spiritual nutrition, humans would lose control.”

She told the practitioner that she understood upon seeing the three words, Truthfulness-Compassion-Forbearance, that this is what she needed. She indicated that the connotation of the three words was enormous, and what she had been seeking in her spiritual quest. She asked for information about group practice sites and indicated she wanted to learn Falun Gong.

Practitioners explain to passersby what Falun Gong is and why the CCP wants to persecute the practice.

Passersby learn about the CCP’s persecution and sign a petition opposing it.

One lady held a Falun Gong flyer in her hands and was reading carefully. She said with a smile before leaving, “I know this practice is very good. I was in a bad mood earlier today. But my heart became peaceful, and my whole body refreshed as I stood here. I will learn more about this practice after going home. Thank you for coming here!”

Lena was hearing about Falun Gong for the first time. She was appalled upon seeing the poster exposing CCP’s live organ harvesting. She signed the petition opposing the persecution. She appreciated that the practitioners held an event there to help more people learn about Falun Gong and become aware of the CCP’s persecution.

Local Falun Gong coordinator Kristina called upon people during her rally speech to spread information about the persecution to friends and family members, and help stop the unprecedented persecution in China. 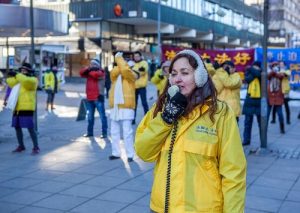 A practitioner speaks during a rally opposing the CCP’s persecution of Falun Gong.

Falun Gong was made public in 1992 and soon spread across China due to its beneficial effects on health and morality. Nearly 100 million people were practicing it by 1999. Out of jealousy, and paranoid of losing control of the people, Jiang Zemin, former head of the Chinese Communist Party (CCP), initiated the persecution of Falun Gong on July 20, 1999.

The persecution has led to the deaths of many Falun Gong practitioners during the past 17 years. More have been tortured for their belief and even killed for their organs. Jiang Zemin is directly responsible for the inception and continuation of the brutal persecution.

The CCP even conducts state-sanctioned live organ harvesting for profit. Due to CCP information censorship, the exact number of practitioners who have died in the persecution is not known.