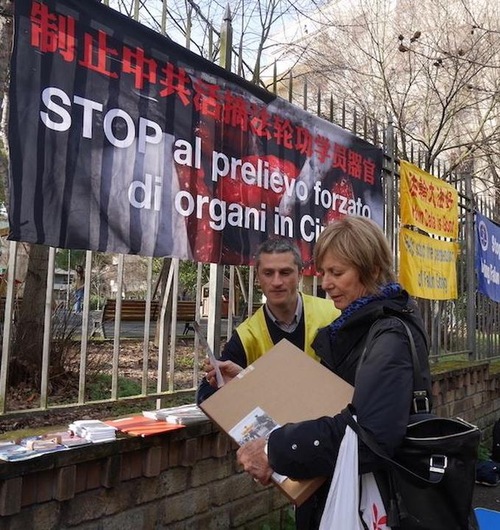 Falun Gong practitioners held public events in front of the Chinese Embassy in Rome, Italy on February 8, 2017 to raise awareness of the Chinese Communist Party’s (CCP) state-sanctioned killing of practitioners in China for their organs. They demonstrated the Falun Gong exercises and set up banners and posters.

A woman named Stefania said to practitioner Dana, “You are doing great. I am proud of you. You expose the facts and are courageously telling people what is happening in China. They [the CCP] are murderers and criminals.” She added that raising awareness is the best way to help stop the persecution.

Mr. Domasso, from Rome, expressed shock and sorrow for the practitioners being persecuted in China and even killed for their organs. He signed the petition against the persecution and took flyers. 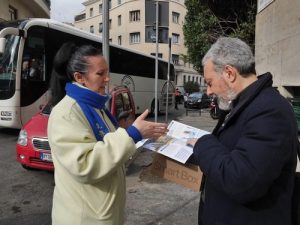 Mr. Domasso listens to a practitioner while reading a flyer.

An Austrian woman living in Rome stopped to watch the practitioners. She said she had heard of the persecution of Falun Gong but was surprised to learn that Huang Jiefu, who is charge of organ transplantation in China, attended the Summit of Organ Trafficking and Transplant Tourism at the Vatican.

When she asked where she could learn more about Falun Gong in Rome, practitioners pointed her to a group practice location outdoors.

A coach with Chinese tourists stopped by the practitioners demonstrating the exercises. Some said, “Falun Gong.” Some tourists took pamphlets about the persecution in China. 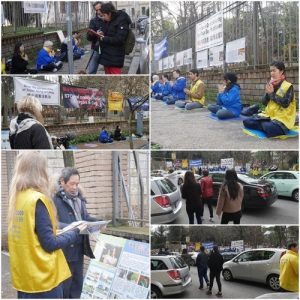 Falun Gong practitioners catch the attention of passersby, including Chinese tourists and reporters.