(Minghui.org) Falun Gong practitioners were invited to participate in the annual Thanksgiving parade in Silver Spring, a city bordering Washington, DC, on November 19, 2022. Their message of Truthfulness-Compassion-Forbearance and the positive energy they passed on were welcomed by the spectators along the route.

Silver Spring hosts the only Thanksgiving parade in the Greater Washington, DC, area, drawing spectators from the surrounding areas. More than 150 groups participated in the parade this year.

When the practitioners passed the viewing stage, the parade moderator introduced Falun Gong.

Taylor applauded when he saw the practitioners. He lives in Silver Spring and has seen them doing the Falun Gong exercises in the center of the city. He said, “I like the message on the banner—Truthfulness-Compassion-Forbearance. It brings people peace.”

It was Rafi’s first time to see Falun Gong practitioners in the parade. “This is a peaceful group. I like the bright colors and their message of Truthfulness-Compassion-Forbearance,” he said.

Jenis Saffiogi from New York said that she had never seen Falun Gong before. “It‘s so beautiful,” she said. “It was a wonderful experience for me to see Falun Gong in the parade.” She said that after returning to New York, she would look for more information about Falun Gong.

Joanne, a resident of Silver Spring, and her friend enjoyed the Falun Gong entry. Joanne said, “It’s amazing. I love their bright colors and positive energy.”

U.S. Senators and congressmen from Maryland, as well as local dignitaries, were also in the parade. Practitioners told them about Falun Gong and presented them with origami lotus flowers. 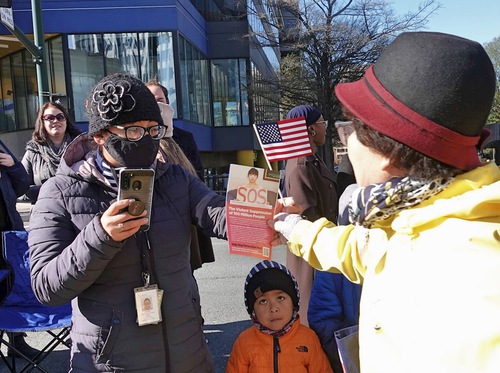 Background: What Is Falun Gong?

Falun Gong (also known as Falun Dafa) was first introduced to the public by Mr. Li Hongzhi in Changchun, China, in 1992. The spiritual discipline is now practiced in over 100 countries worldwide. Millions of people who have embraced the teachings—which are based on the principles of Truthfulness, Compassion, and Forbearance—and learned the five exercises have experienced improved health and well-being.