Skip to content
Nov. 13, 2022 | By a Minghui correspondent in San Francisco, California

The 101st annual Veterans Day Parade was held on Sunday in San Francisco to honor all members of the armed forces who have served the country.

The Veterans Day Parade began at 11 a.m. at Fisherman’s Wharf and proceeded along The Embarcadero. The parade featured the United States Navy, Army, Air Force, and different marching bands and flag holders.

The Western U.S. Tian Guo Marching Band members performed pieces, including “Falun Dafa is good” and “The Stars and Stripes Forever.” The pieces were well-received by spectators, who warmly applauded.

When the band passed by the organisers’ podium, the host introduced, “This is the Tian Guo Marching Band. Members of the marching band are Falun Dafa practitioners who abide by the principles of Truthfulness-Compassion-Forbearance. They would like to spread the beauty of Falun Dafa to everyone.” 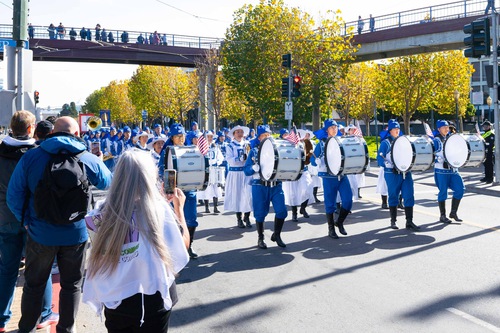 Local Organisers: We Welcome Falun Dafa Practitioners To The Parade

Charles Paskerian, second vice commander of the American Legion Cathay Post 384, said he was proud to have practitioners participate in the parade.

“It is great that practitioners can attend this parade. Their musical pieces are spectacular,” he said.

Raymond K. Huang, post commander of the VFW Post 4618 and one of the parade organisers, welcomed the Falun Dafa practitioners. “Falun Dafa’s procession is great and their musical pieces are fabulous. I am happy to see them again in the parade.”

Mr. Wong, a retired Chinese-American officer, said that the marching band pieces were great. “They are very well-organised and professional.”

“I am amazed at the Tian Guo Marching Band,” said Doug Bullard, Commissioner Board of Supervisors Seat 8 of the Veterans Affairs Commission. “The marching band is amazing, and professional. It is perfect. The pieces that they performed left a deep impression on me.”

He also proudly said that he has watched Shen Yun Performing Arts. He praised members of the Tian Guo Marching Band, because they performed like professional musicians.

Members of the Tian Guo Marching Band attracted the attention of many people while they rehearsed before the parade started. People stopped to watch and take photos.

Paul Jones said he would read the Falun Dafa truth-clarification pamphlet that he received from a practitioner. “The principles of Truthfulness-Compassion-Forbearance are beautiful.” He stated to carefully read over the truth-clarification booklet. “I am looking forward in reading more about it.”

“Their performances are great. I am very grateful that practitioners are able to participate in this parade,” Paul said.

He said he particularly enjoyed the piece “The Stars and Stripes Forever.”

Ron Tuason stated, “I have learned about Falun Dafa from the media. I’m a veteran and I often lose my temper and feel depressed. I need to practice meditation exercises.”

He said he hoped to support Falun Dafa, and expressed an interest in learning the practice online. He wanted to tell practitioners, “I am grateful that you are able to attend this parade.”

Bob was curious about the Asian composition of the Tian Guo Marching Band. He stated, “This is my first time learning about Falun Dafa. I know people in China have no human rights. They will be arrested once they start fighting for human rights. It is very evil.”

Marwa, who is from France, was surprised that after coming to San Francisco she saw the delightful parade. She liked the Tian Guo Marching Band and said, “The performance is beautiful, but I have never heard about Falun Dafa.”

After learning about the principles of Falun Dafa, “Truthfulness-Compassion-Forbearance,” Marwa said, “Being sincere means to not lie. Compassion and tolerance are also very important. We should follow these principles.”

Angel Panaweno watched the parade with his friends and said he enjoyed the Falun Dafa practitioners’ procession.

“The formation is very synchronised, and I like them,” he said. “They sound magnificent and their drums beats are in sync. I admire them for participating in the parade and playing so melodiously. It is truly wonderful.”

He said that he enjoyed the principles of Truthfulness-Compassion-Forbearance. “Everyone should have freedom of religion. Unfortunately, this is not the case in China for Falun Dafa practitioners and it makes me upset thinking about it.”

Local Resident: I Support Everything Practitioners Do

Jay stated that he is the son of a veteran and was proud of it. After chatting about the Tian Guo Marching Band, he said, “Practitioners performed very well. I know that Falun Dafa teaches people to be on the side of the divine, which is beneficial to one’s soul. I know the principles of Truthfulness-Compassion-Forbearance and support everything that you do.”

Gerald Haden, a carpenter from San Francisco, said that his son is a member of a high school band and he enjoyed watching the Tian Guo Marching Band’s performance. He said that the performance was wonderful and knew about the ongoing persecution of Falun Dafa in China.

“The Chinese Communist Party (CCP) is an evil regime and we should awaken to its true nature. The CCP is trying the spread its evilness all across the world. I wish you the best of luck,” Gerald said.

Mieuel, a plumber from San Francisco, said that Falun Dafa’s principles of Truthfulness-Compassion-Forbearance are good and that everyone should like them.

After talking about the ongoing persecution of Falun Dafa practitioners in China, Mieuel said, “The CCP is attempting to control everything. This regime should be abolished, everyone should be able to have freedom.”

Clare, who works as a secretary, said, “The principles of Truthfulness-Compassion-Forbearance are very good. I support these principles. It is important that we treat others with sincerity and compassion. The persecution should have never existed.”

Samuel Deharl said that Falun Dafa’s procession was great. “The traditional music made me feel very comfortable. I like it a lot. It makes me want to dance to the music.”

He said that the principles of Truthfulness-Compassion-Forbearance are universal values. “Everyone should treat each other with sincerity, kindness, and find one’s own shortcomings when encountering conflicts.”