(Minghui.org) Nearly 500 Falun Dafa practitioners, dressed in yellow t-shirts and white pants, gathered at the Jubilee Park near the Sydney city centre on October 8, 2022. They formed four golden Chinese characters in the official script, representing the “Fa Rectifies the Human World.” The scene was magnificent and spectacular.

The annual Australia Fa Conference was held online for two years given the pandemic. This year, the practitioners finally got to meet each other at the conference during the spring season in the southern part of the globe. Everyone cherished this precious affinity and hoped to awaken the kind thoughts and consciences of people through their events. They spread the message of joy and the truth about Falun Dafa.

In February 1999, more than 20 years ago, Australian practitioners were the first to hold events to form characters outside of China. At the first event, the practitioners formed the Chinese characters “Truthfulness-Compassion-Forbearance” at Darling Harbour in Sydney. They expressed their profound gratitude to Master Li Hongzhi (Dafa’s founder) for his compassion. At the same time, it was also a display of the goodness of Dafa.

After 1999, the Falun Dafa practitioners outside of China continued to hold large-scale character-forming events to display the grandeur and widespread practice of Falun Dafa.

This year, the practitioners in Australia formed the glittering characters the “Fa Rectifies the Human World,” which shone brightly on the vast grassland. They wanted to express how widespread Dafa has been spread throughout the world. At the same time, the practitioners also hoped to spread hope to the modern world, correct people’s hearts, bring blessings to humankind, and bring light and hope to all living beings.

At the park, a few practitioners from different regions shared the goodness that Dafa has brought them after they started cultivating, and their thoughts by participating in the event. 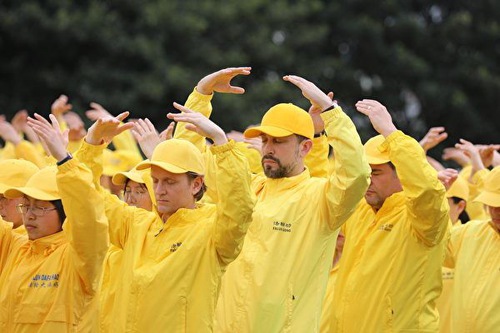 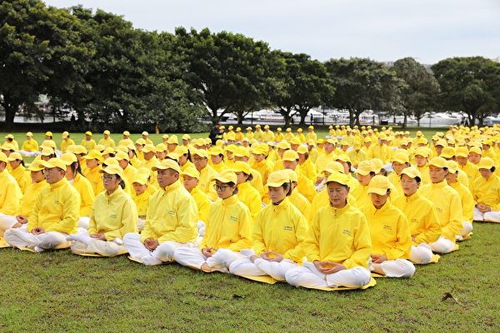 Janine Rankin, a Falun Dafa practitioner who moved to Queensland from Melbourne not long ago, is a professional hair stylist and flower artist. She has a deep interest in arts and creativity and has been employed in many hair styling fields.

She said, “When forming the characters, I felt a very strong energy field. To me, being able to participate in the event today is a magical and unforgettable experience.”

Since she was 16 years old, Janine felt that the world is going backward and losing its relationship with the universe. Therefore, she has been searching for the meaning and purpose of the existence of living beings.

“During February 1999, I visited a friend in Melbourne,” she said. “I saw the great changes both physically and mentally in this friend who had just cultivated for three months. Thus, I came to know about Falun Dafa and embarked on my path of cultivation.”

When she visited the practice site for the first time, and did the first set of exercises, “Buddha Stretching a Thousand Arms,” she said, “I was moved to tears. I knew that this was a holy practice.”

When she read Zhuan Falun for the first time, she felt that her whole body had been cleansed, and she had a strong energy field every time she picked up Zhuan Falun. This went on for two weeks.

Then, after two weeks, she continued to do the exercises and meditated. She said, “I discovered that my body had changed. I felt more positive and had more energy. My skin also became very transparent and smooth. Many people complimented me, and said that I looked so healthy.”

Rankin persisted in doing the exercises, meditated, and followed the principles of “Truthfulness-Compassion-Forbearance.” She understood that “When I go through big changes physically, my mind becomes more pure and clean. When I keep getting rid of my selfishness and ego, and learn how to become more tolerant, my life becomes more meaningful.”

“I Found the Meaning of Life”

Sean, a Falun Dafa practitioner from Adelaide, was born in Cambodia. He immigrated to Australia in the 1990s.

Sean has cultivated in Falun Dafa since 1996. He said that it is very important to come to Sydney to attend the Australia Fa Conference and participate in other truth-clarifying events. He can also meet fellow practitioners from many regions. “I feel very happy seeing so many practitioners get together to share their cultivation experiences,” he said.

“The reason we come here,” said Sean, “is to let more people know the truth about Falun Dafa. They can see who we are, and what we are doing.”

Sean continued, “In our daily life and work, we try our best to follow the Falun Dafa principles of Truthfulness-Compassion-Forbearance. Of course, we still have all sorts of bad thoughts. But as time progresses, through cultivating ourselves, we will change little by little, and become better people. In the past, I often felt sad. The moment I met with any problems, I felt unhappy. But I am much better now in this respect, and my concentration has improved too. I found the meaning of life and I know where I am headed.”

“Repaired My Relationship with My Mother and Brother”

Sheridan Genrich, a Falun Dafa practitioner from Queensland, is a nutritionist.

Genrich started cultivating in Falun Dafa in 2002. She said, “If truth be told, I did not come to cultivate in Falun Dafa because of any illness.” A former air hostess, Genrich said, “The most important reason for my cultivation is because of stress. I am a relatively sensitive person, and often realised the hopes of others in me. This caused me to feel overburdened.”

After cultivating, Genrich’s sleep and health condition improved, and the stress also reduced greatly. She felt that she was lucky to be able to cultivate in Falun Dafa. Her family members are also supportive of her cultivation in Falun Dafa, “That is because they can see the changes in me,” she said. “I used to hold very stubborn opinions on some matters. They saw that I am really able to let go of such opinions. I no longer judge others as I did in the past, and I became calmer.”

“I also repaired my relationship with my mother and brother. In the past, we did not talk to each other, and we always had many conflicts. However, I am a peace ambassador. I try to keep all the communication channels open. No matter what happened in the past, or what they think or say about me, I am able to accept it.”

Genrich started a practice site with a fellow practitioner in her area. “Some of the good friends whom I have known for many years also come to do the Falun Dafa exercises regularly. Not only has their sleep quality improved, they also have lesser conflicts with their respective families.”

Genrich felt very happy when she came to attend the Australia Fa Conference this time and saw many fellow practitioners whom she had not seen for many years. She also had a very special feeling. She said, “Due to the pandemic, we could only exchange our cultivation experiences online for the past 3 years. Today, I actually got to meet them. She had not seen some of the practitioners for 10 years. However, they still look that young, just like 10 years ago. Being able to see the beauty and inner glow in these fellow practitioners is really unbelievable. People will grow old but these Falun Dafa cultivators maintain their youth and purity.”

“The Energy Field Is Very Strong and Felt Magnificent”

Anni, a Chinese practitioner from Brisbane, participated in the character-forming event that day and said, “I feel quite excited in my heart. I feel fortunate to be able to participate in an event like that, as I came from China. When I was still in China, whenever I saw reports of such character-forming events by practitioners outside of China, I felt especially emotional. Today, when I was forming the characters and practicing the exercises in the field, I felt that everything turned red. The energy field was very strong and it felt exceptionally magnificent.”

“I noticed that when people watch the Falun Dafa practitioners hold such grand events, they are very attentive. I saw many pedestrians taking photographs. My husband met a Western couple, and they said that they were amazed, and thought that Falun Dafa is remarkable.”

Jay Do, a Falun Dafa practitioner from Sydney, has already cultivated for four years. The earliest person to practice Falun Dafa in his family is his mother. After that, she introduced Dafa to him and his wife. His whole family had just moved to Sydney from Adelaide not long ago. As this is the first time that they had participated in such a large-scale Fa-promoting event, Jay and his wife were very excited.

Talking about his cultivation experience over the past four years, Jay said, “Our family does the exercises together every day. Over these few years, I felt that I improved over time. For example, be it at work or in my daily life, I can let go of things that I was very attached to very easily. Therefore, when I meet with problems, they can be resolved very easily. For example, sometimes when there is a conflict of interest, I will no longer use the method that I used in the past to resolve the matter. I am able to remain calm. Therefore, these areas are the aspects where I benefited the most in after I started my cultivation.”

“Think Positively with an Open Mind. No Matter What Happens, It Is a Good Thing”

Hoang Hai Tran, a young Vietnamese practitioner from Sydney, said, “When I participated in the forming of the characters, my inner heart felt very peaceful and calm. My thoughts are very pure and I feel as though my body and mind have merged into one.”

Hoang Hai Tran obtained the Fa in 2018. He said, “Before cultivating, I often trained at the gym, and also employed other methods to maintain my health. However, ever since I cultivate in Falun Dafa, I felt that this practice is more effective than all the methods that I have tried in the past to maintain my fitness. I’m stronger and healthier now.”

“Now, I am able to think positively when I face problems. No matter what happens, it is a good thing. Therefore, everything around me also improved. This is especially true when it comes to my job and family life. Almost everything became smoother.”

“My Mother is also cultivating in Falun Dafa,” he said, “and she has cultivated for 10 years. She is very diligent in her cultivation. Given her influence, our entire family is cultivating now. Therefore, our family relationship has become harmonious. We feel very happy to become Dafa practitioners.”

Hoang Hai Tran thinks that “The CCP’s persecution of the practitioners in China has gone on for 23 years. The persecution should have stopped long ago. I feel that the CCP’s doomsday is not far from now.”