(Minghui.org) Sunday October 16 was a car-free day initiative in Jakarta, Indonesia. Falun Dafa practitioners took this opportunity to introduce the practice to people who were out walking on streets normally filled with cars. The peaceful and gentle exercise movements attracted much attention from passersby. 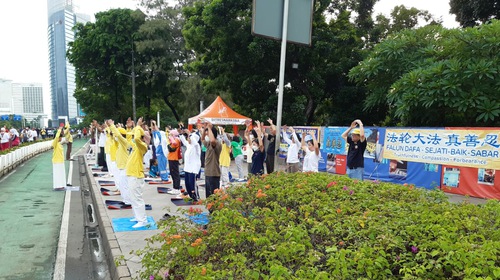 Governor of Jakarta Accepts a Flyer

Next to the group practice, practitioners put up banners with messages such as, “Falun Dafa is good” and “Truthfulness-Compassion-Forbearance is good” in Chinese, Indonesian, and English. There were also photos showing how Falun Dafa is practiced around the world.

Practitioners began meditating and dozens of people joined them and continued until the end. When one man heard the words, “Falun Dafa is good” and “Truthfulness-Compassion-Forbearance is good” he said these values are very important.

The governor of Jakarta and some provincial officials came on bicycles. A practitioner dressed as a heavenly maiden handed them some information. With a smile, the governor accepted a flyer and lotus flower and thanked her.

After the group exercises, several practitioners talked about how they benefited from the practice. Yiyan said that he smoked for over 30 years. He started as a teenager by stealing cigarettes from his father. He tried many methods to quit his bad habit, but none of them worked. “Shortly after I read Zhuan Falun I was able to stop smoking and I was so happy,” he recalled. Because he works the night shift, he only works three or four hours a day, but he is now healthy and happy.

Muda Mana began to practice Falun Dafa two years ago. Seeing wonderful changes in his mother, her son started to read Zhuan Falun, the main teachings of Falun Dafa. In the past, he constantly coughed and had difficulty reading. His mother said, “His coughing has now completely disappeared and he can read normally in school like other kids. I am so grateful to Falun Dafa.”