(Minghui.org) New York City’s 78th annual Columbus Day Parade took place on Fifth Avenue in Manhattan on October 10, 2022. More than 100 groups participated this year. The Falun Gong group was close to the front of the parade with a procession including the Tian Guo Marching Band, a troupe of waist drummers, an exercise demonstration group, and a display of flags. 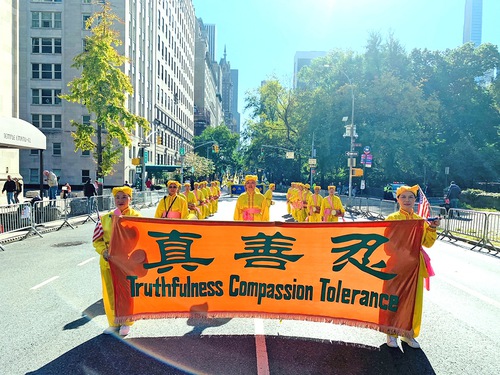 During the parade, the Tian Guo Marching Band played the national anthem “The Star-Spangled Banner” and other music including “Falun Dafa is Good,” “Triumph,” “Sacred Song,” “Drums and Trumpets Shake Ten Directions” and “Falun Holy King”.

Many viewers watched with excited expressions and cheered, some nodded while watching, some clapped to the beat or danced with excitement and some took out their mobile phones to take pictures and videos.

Conductor of the Tian Guo Marching Band Vega Ni said: “Falun Dafa has practitioners from all ethnic groups. We are a multi-ethnic group. We hope to introduce the beauty and peace of Falun Dafa to the American people through music.”

Joanne Dimauro said happily: “This is the first time I’ve seen them [Falun Gong practitioners]. I heard their drum music. They are great!”

YouTuber Fernando broadcast the Falun Dafa team live. He said: “I love them. I often see their parades. And every time I see them, they are happy. Everyone is full of smiles, very friendly.”

Many high-end residential apartment buildings are located around Central Park, and nearby residents heard the music and went out to watch the parade. Joy said, “It’s great. The waist drummers, the marching band, I love it!”

A Taiwanese woman named Grace was happy to see Falun Gong in the parade. She wanted to know when and where the next parade would be because she liked the Falun Gong parade procession very much. She left her phone number so she could be informed about future parades.

Columbus Day, which falls on the second Monday in October, is a national holiday in the United States to celebrate the discovery of the New World of America by the Italian explorer and navigator Christopher Columbus in 1492. New York City celebrates the festival with a grand parade every year along Fifth Avenue in Manhattan.

Falun Dafa (also known as Falun Gong) was first introduced to the public by Mr. Li Hongzhi in Changchun, China, in 1992. The spiritual discipline is now practiced in over 100 countries worldwide. Millions of people who have embraced the teachings—which are based on the principles of Truthfulness, Compassion, and Forbearance—and learned the five exercises have experienced improved health and well-being.