(Minghui.org) The information display and exercise practice site at Niagara Falls run by Falun Dafa practitioners from Toronto was opened to the public on May 21, 2022. This year, the site even obtained a permit from the Niagara Parks Commission to operate.

Just like in previous years, practitioners hung Falun Dafa banners, distributed fliers, and collected signatures on a petition calling for an end to the persecution in China.

Although the park only recently opened to the public after the pandemic shutdown, it has been crowded with tourists from around the world. Many people noticed the display about Falun Dafa and came to learn the exercises.

At times, there was even a line of people waiting to sign the petition. Many Chinese nationals also renounced their memberships in the Chinese Communist Party (CCP) and its affiliated organisations. 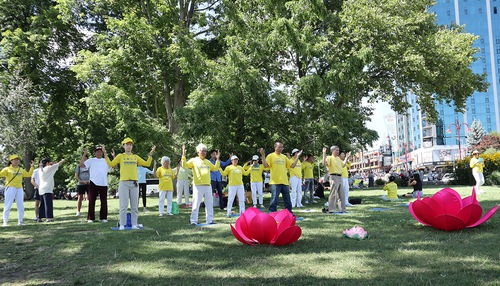 Obtaining a Permit for the Falun Dafa Information and Practice Site

A month after practitioners started going to Niagara Falls in May this year, by early July, they noticed vehicles from the Chinese consulate following them there. Soon after, police officers who the practitioners never met before came to the site and told practitioners they could not be there. When practitioners met with the police officer in charge, they were told, “We have orders from our supervisors. Why don’t you speak to them?”

Practitioners contacted over two dozen government officials to tell them the facts about the persecution. These officials met with practitioners face to face, and listened as practitioners told them about the brutal suppression in China. They brought them information about Falun Dafa and lotus flowers.

According to Ms. Wang, one of the practitioners who met with the officials, “They were friendly and took photos with us standing next to our Falun Dafa banner.

Practitioners contacted the local government officials one by one, explaining the facts about the persecution. When some officials were unable to meet with them, practitioners drove to their office and dropped off information before following up with phone calls and text messages.

Ms. Wang said, “In the beginning, many officials did not know the truth. Many of them said they realised what Falun Dafa is through meeting us. Some even asked to meet with us again when they returned to work after the holidays.”

Soon afterward, practitioners were informed they were given a permit to hold an information/practice site at Niagara falls.

Practitioners were allowed to set up displays and teach the exercises in a large park just one street away from the falls, a popular tourist destination. This area was more appropriate for displaying information and teaching the exercises.

After the practice site resumed, police officers dropped by and greeted practitioners.  They congratulated them on successfully acquiring a permit to operate the practice site. Some even said they would give Falun Dafa a try in the future. 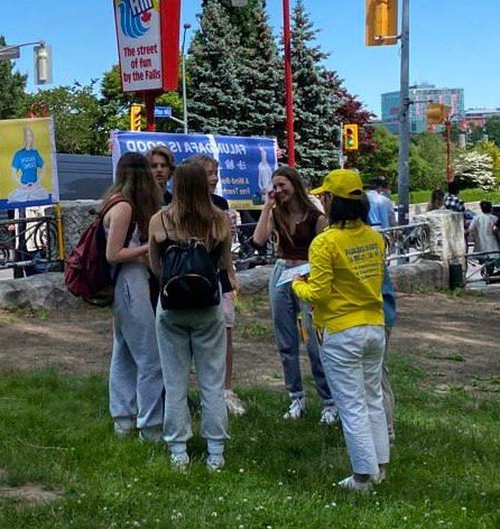 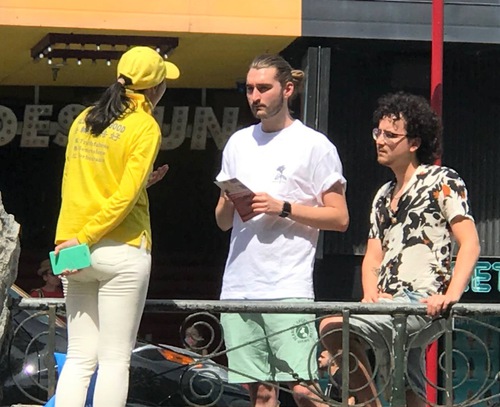 Soon after practitioners arrived at the site one day, a woman approached them wanting to know about Dafa. After practitioners told her what the practice entails, she left, taking a lotus flower with her. She returned in the afternoon to learn the exercises.

She learned the five sets of exercises and put in a lot of effort while doing the sitting meditation. After learning the movements, she said, “I work at the ticket sales office 100 meters away from the park. I am a staff at the tourist information board. I usually have a half an hour break from work and I don’t come out of the office. All of a sudden, I felt as if someone led me out of the office today. I followed the crowds and came to this spot.”

“This feels great. The moment I came here, I knew why I walked out of my office–it is as if I was guided by someone to come here to learn Falun Dafa. I feel wonderful doing the exercises–I feel energy flowing through my body. My palms feel hot and I can feel a strong energy field.”

She thanked practitioners after doing the exercises and said she would come and join them again.

A family from Yellowknife was visiting Toronto on vacation. They were happy to meet practitioners at Niagara Falls. The father said, “We might not see practitioners in Yellowknife. In that case, we will go online to do the exercises with everyone.”

His daughter who is in her teens looked very peaceful while doing the sitting meditation. When practitioners asked how she felt, she replied, “Amazing. The exercise music is beautiful. I feel completely immersed in it and cannot move.”

She added, “This exercise is wonderful. I will go to the Falun Dafa website to learn this when I return home and join the free classes.”

Nezila and her mother from Alberta approached practitioners wanting to learn the exercises. Afterward, they said they felt relaxed and planned to join the local practice site when they returned home. They also said they would read more about the persecution online.

Nezila sat in the full lotus position while doing the sitting meditation for a long time. She said excitedly, “My hands feel warm. I can feel energy.” She said she plans to read Falun Dafa’s main book Zhuan Falun.

A woman from London spent a lot of time taking videos of the exercise demonstration. She said she intends to publish them on social media, “I am overjoyed today. I will stay at Niagara Falls for two days.” She then started to learn the exercises from practitioners.

Lara and Frank from Italy read the information on the display boards. They took a photo in front of the practice site.

A family of six from Lebanon said Falun Dafa is beautiful. They happily accepted a lotus flower and said they would learn more about Falun Dafa.

A university student who will study psychology when the school term begins in autumn was visiting Niagara Falls from Sudbury, a city in northern Toronto, and saw the Falun Dafa practice site. She spoke with practitioners for a long time. She said she was interested in human body phenomena. Practitioners suggested she learn the Falun Dafa exercises and read the book Zhuan Falun as it would help her understand the universe and the mysteries of the human body.

She asked many questions. Practitioners shared with her the amazing things and transformations they experienced through practicing Falun Dafa. She said, “I want to learn Falun Dafa” and purchased a book on the teachings.

Tourists came in droves to learn about Falun Dafa. Some were from China and asked practitioners to help them withdraw from the CCP.

Practitioner Ms. Zhang who often comes to Niagara Falls to help raise awareness said that recently there have been more and more Chinese tourists. Many of them agreed to quit the CCP after she told them why millions of Chinese have renounced it. In early August, over 30 people quit the CCP in just one day.

A woman from Beijing who looked like a government official and her 20-year-old son stopped to talk with practitioners. She planned to quit the CCP after Ms. Zhang spoke to them when her older son came up and said, “Don’t quit the CCP, let’s go.” He pulled them away.

Ms. Zhang said, “It began to rain, so I walked into a shop and met them at the entrance. There was another family of three next to them who were their relatives. I told all 6 people the purpose of quitting the CCP. In the end, they all agreed to renounce their Party memberships using pseudonyms.”

Mr. Dong from Wuhan and his family met Ms. Zhang and the five of them agreed to quit the CCP. He said, “Our family escaped from Wuhan during the pandemic. We gave up our business and left China as our lives are more important.” 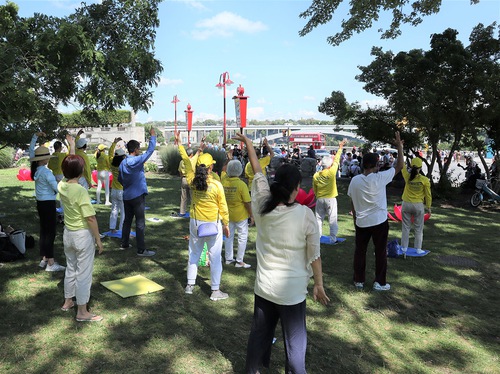 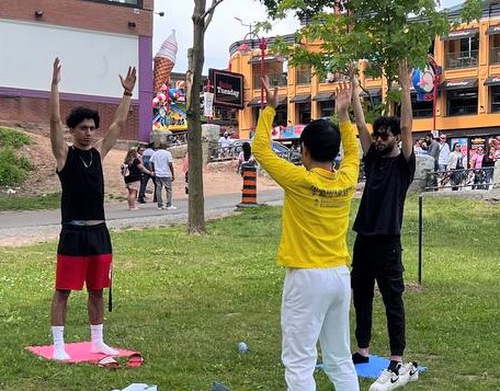 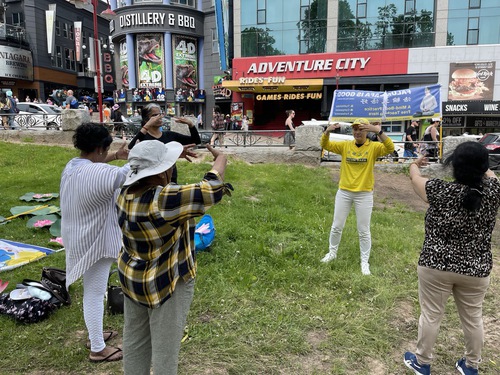 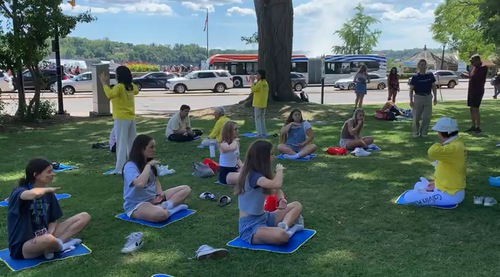 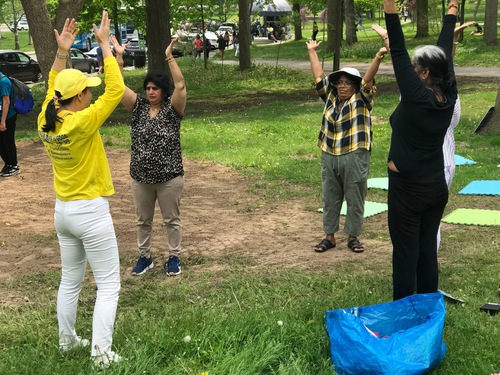