(Minghui.org) Located in the central business district and known as the “civic heart” of Sydney, Martin Place was the site of a colorful rally on September 8, 2022, to celebrate 400 million Chinese people who renounced their memberships in the Chinese Communist Party (CCP). Legal professionals, human rights advocates, and community leaders spoke during the event, highlighting the significance of this milestone.

Centre for Quitting the CCP: Communism Is a Threat to the World

Joanna Zhou, representative from the Centre for Quitting the Chinese Communist Party in Sydney, said it took great courage and wisdom for 400 million Chinese people to withdraw from the CCP and its junior organisations, the Communist Youth League and the Young Pioneers. “This is a milestone in China’s transition to a peaceful period without communism,” she said.

She pointed out that it is also a major achievement, because the CCP harms both Chinese people and other peoples around the globe. The ultimate goal of the CCP is to destroy mankind, which makes it a threat to the entire world, Ms. Zhou said, adding, “More and more people have realised that ending the totalitarian regime is the only path towards happiness and inner peace.”

Silvana Nero, wife of the Rev. Hon. Fred Nile MLC, also attended the event. She read a letter from her husband, the former leader of the Christian Democratic Party. He stated, “The CCP’s brutality damages mankind because it has enslaved an entire nation. Mankind has paid a costly price for the CCP and those who withdraw from the regime should be commended.”

He also thanked the Global Service Centre for Quitting the Chinese Communist Party and said it plays a critical role in helping people from around the world to recognise the vicious nature of the CCP.

Legal Expert: The Importance of the Constitution

David Flint is a legal expert and recipient of the prestigious Medal of the Order of Australia. Referring to the forced organ harvesting carried out by the CCP, he said officials tie healthy Falun Gong practitioners to operating tables and remove their heart, liver, or kidney to sell for profit. That is why one can receive an organ in one month’s time in China, while it takes years in Australia to find a suitable donor.

Mr. Flint said, “Thomas Jefferson wrote, ‘The two enemies of the people are criminals and government, so let us tie the second down with the chains of the Constitution so the second will not become the legalised version of the first.’ This also applies to China, and quitting the CCP is a right of the Chinese people to gain freedom.”

John Deller, spokesperson for the Australian Falun Dafa Association, said that the rally is a humanitarian gathering based on compassion. Although Falun Gong has brought tremendous benefits to practitioners and society, the peaceful practice has been severely suppressed by the CCP since July 1999. A large number of practitioners have been arrested, detained, and tortured, with some missing.

“Exposing these brutalities will help to end the tragedies,” he added. “Especially after the Nine Commentaries on the Communist Party was published in 2004, people have awakened and recognised what the CCP really is.” Mr. Deller is glad to see 400 million Chinese withdrawing from the regime with many Westerners joining the movement of rejecting the CCP.

Feng Chongyi is Associate Professor of China Studies at the University of Technology in Sydney and is also chair of the Alliance of Victims of the Chinese Communist Regime. In his speech Mr. Feng said no one has any excuse to interact with a vicious regime like the CCP.

“In fact, the contrast between the CCP and Falun Gong is clear. The CCP is a regime of vicious lies and brutality, while Falun Gong represents facts, virtue, and compassion.”

Sophie York, barrister and instructor at the University of Sydney, said the rally showed that more and more people have seen the danger of the CCP in real time. More specifically, it consists of terror and cruelty, sorrow and pain. In addition, the regime does not follow universal values such as freedom of speech, belief, association, owning property, and giving birth. The CCP is the enemy of the free world and it should be blocked.

Thomas Kadmon, a co-founder of Interfaith Conflict Resolution, said religious freedom is not a privilege from a government. Instead, it is an inalienable right that we are born with.

Bob Vinnicombe, human rights advocate and editor of China Impression Forum, said that separating from the CCP relies on the Chinese people themselves. Even under the CCP’s tight control, there are different opinions. Vinnicombe said Falun Gong practitioners have a leading role in exposing the CCP’s cruelty. That is why they are on the front line of the quitting the CCP movement.

Sydney resident Mr. Zhang said that the CCP has been suppressing people with brutality and lies. Although the regime forces people to join it, it does not offer a path for people to exit – this is the characteristic of a cult organisation. To stop the CCP’s harm and eradicate vicious elements of the regime’s ideology, it is important to quit the regime.

Mr. Zhang said that once its true nature is revealed, the CCP does not have any power to fight with mankind. That is why the regime has been misleading public opinion and covering up the facts. “That explains why Falun Gong practitioners’ truth-clarification efforts have terrified the CCP,” he continued. “Only by remaining clear on what the CCP is can we make the right choice – withdrawing from the CCP and bringing our society back on track.”

Ganesh Loke, entrepreneur and former federal elections candidate, said the CCP has been suppressing Falun Gong for a long time. But practitioners do not give up and Falun Gong has attracted more people. He considered it a major milestone for 400 million people to have quit the CCP.

Impressed by the peaceful exercises, local resident David Broughton said the CCP is notorious for its severe human rights violations. “Everyone should have his or her own belief, instead of blindly following the totalitarian regime,” he said. “This world needs Truthfulness-Compassion-Forbearance.”

When he heard that 400 million people have renounced their CCP memberships, Mr. Broughton said that this was a great accomplishment. “This rally is a beautiful event because people can gain their freedom and live a life they want.”

Phyllis Wairama had not heard about the persecution of Falun Gong but she agreed with the principles of Truthfulness-Compassion-Forbearance. “I am proud of those Chinese people who have made the move,” she explained. “This is much needed because the CCP should have been long gone and we need a peaceful society.” 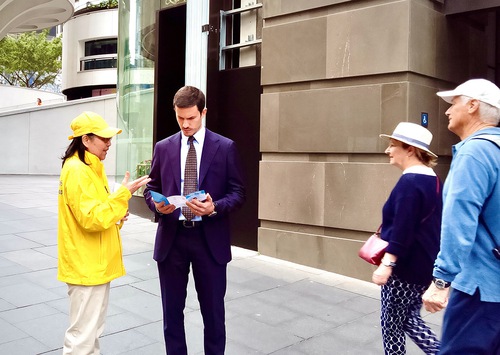