Skip to content
July 30, 2022 | by Falun Gong practitioners in Ukraine

(Minghui.org) July 20, 2022 marked the 23rd year since the Chinese Communist Party (CCP) launched a nationwide campaign against Falun Gong, a mind-body practice based on the principles of Truthfulness-Compassion-Forbearance.

On July 23, 2022, Falun Gong practitioners in Ukraine held an event in the capital city of Kyiv to peacefully protest against the CCP’s persecution of their counterparts in China. 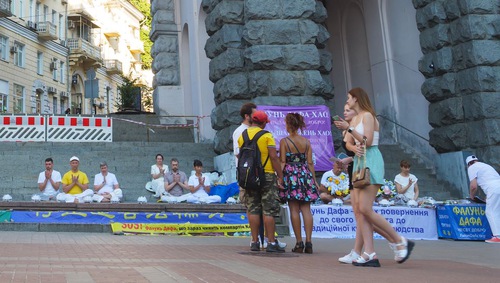 Despite the ongoing war in Ukraine, there were still many people on the streets of Kyiv, including those from the war zones in eastern and southern Ukraine who had fled to the capital. Many of the newcomers to the capital saw the activities of Falun Gong practitioners for the first time, which gave them an opportunity to learn about the practice. 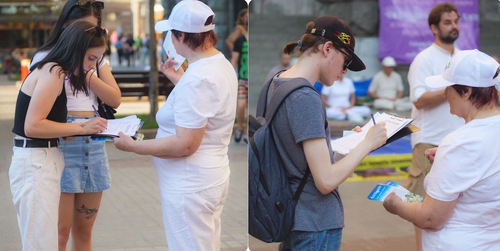 Some people asked why the practitioners at the event looked so solemn, with photos in their hands. After the practitioners’ explanation, the public learned that the photos were of those Falun Gong practitioners who had died as a result of persecution in China.

Some expressed that they had heard of the crimes against Falun Gong practitioners in China, while others, who initially appeared indifferent to the persecution, changed their attitude and signed the petition after learning more about the CCP’s atrocities.

A woman named Anna walked up to the petition table and signed her name. She explained to the participants that she knew a lot about the persecution of Falun Gong practitioners.

“I know that physical examinations and tests are performed on prisoners of conscience, especially those who have no relatives. [The Chinese authorities] check the condition of their organs and if necessary, they’d be killed for their organs. This is horrible.” She wished the event a success.

A similar event was also held in Kharkiv, the second-largest city in Ukraine and one of the hardest hit during the war. Kharkiv practitioners said that they have been holding this event in downtown on July 20 every year since the persecution in China began in 1999.

As the bombing of Kharkiv continued, many residents have been evacuated and the city’s central streets and parks remained empty. So before July 20 this year, Kharkiv practitioners held an event in the square near the downtown train station to expose the CCP’s persecution of Falun Gong practitioners.

During the war, Kharkiv residents suffered painful physical and psychological trauma. Falun Gong practitioners presented small lotus pendants with the words “Truthfulness, Compassion, Forbearance” to the war-traumatised people, telling them that if we wanted to change the world, it’d help if we all start with believing in “Truthfulness-Compassion-Forbearance,” which can bring hope and improvement to people’s lives.

Many people said they were grateful to practitioners for reminding them to remain kind and help support resisting the CCP’s persecution in such a difficult situation.