Located northeast of Dallas, Murphy is proud of its multicultural population and has proclaimed May 13 “World Falun Dafa Day” in the past. Practitioners participated in the 12th Annual Murphy Maize Day on September 25. Many people had a chance to learn about the benefits of Falun Dafa. Some were interested in learning the exercises.

A young woman named Ashley said that she was happy to see practitioners at the event telling people about the persecution. She said many people ignore these injustices and dare not voice their opposition for fear of repercussion. She said she admired practitioners and was encouraged by their righteous actions.

The annual Peanut Festival in Aubrey, a small town north of Dallas, featured a parade and over 100 booths on the main street on October 2. Practitioners participated in the annual event to introduce Falun Dafa.

Kate, an electrical engineer, said that she liked meditation and was looking for a practice to uplift her spirit. After talking to practitioners, she decided to learn Falun Dafa.

Michele said that she had heard how the CCP (Chinese Communist Party) persecutes Christians. After hearing about the persecution of Falun Dafa she realised that the CCP was against any righteous belief. Michele expressed her admiration for Falun Dafa practitioners’ courage. 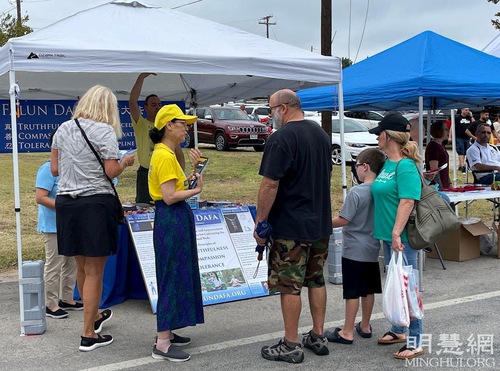 Holistic Festival of Life and Wellness

Practitioners once again participated in the Holistic Festival of Life and Wellness at the Plano Convention Centre on October 30, 2021.

Many people stopped and asked about Falun Dafa. They were told about how the ancient cultivation practice helps to improve one’s moral standards and health through the exercises and by following the principles of Truthfulness-Compassion-Forbearance.

Many visitors couldn’t believe that the CCP regime would persecute such a peaceful group of people. They signed a petition to end the atrocities.