Falun Gong practitioners in Brisbane, Australia, held activities on Brisbane Square on July 20, 2013, to expose the brutal persecution of Falun Gong, launched by the Chinese Communist Party (CCP) fourteen years ago. The practitioners displayed banners protesting the persecution, demonstrated the Falun Gong exercises, distributed introductory materials and collected signatures on a petition calling for an end to the persecution. 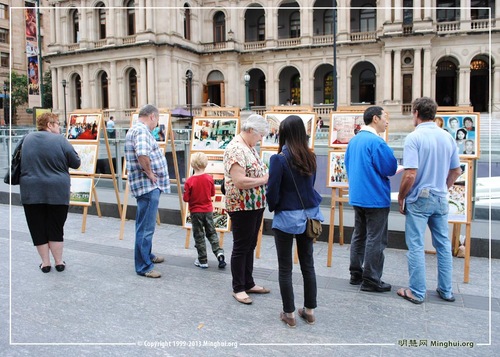 People in Brisbane learn about the persecution of Falun Gong 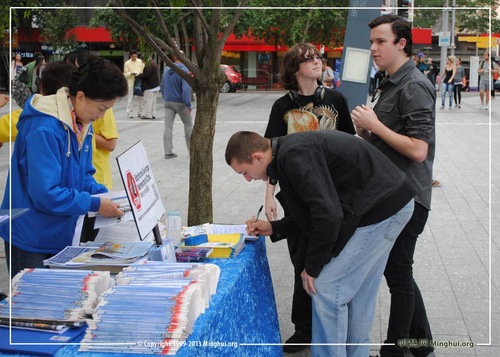 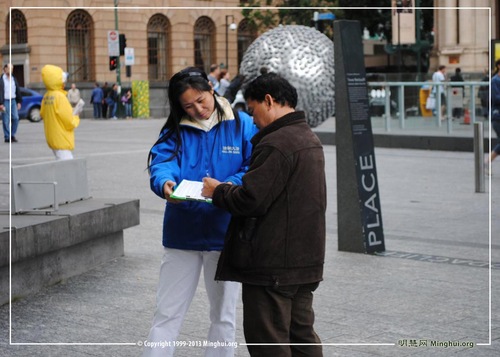 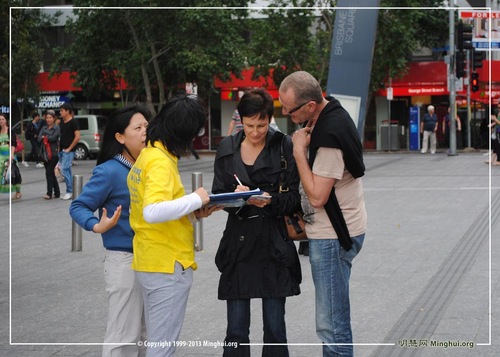 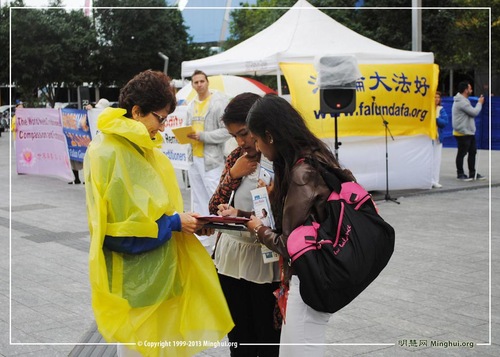 Collecting signatures calling for an end to the persecution 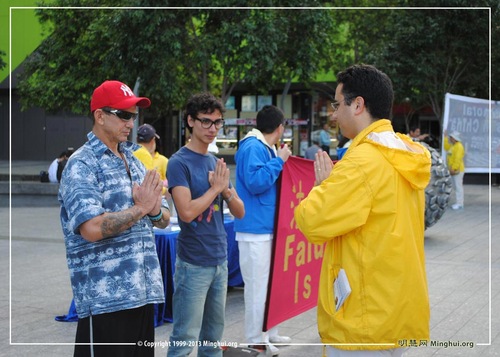 On busy Brisbane Square, many passers-by were shocked by the CCP’s crime of harvesting organs from living Falun Gong practitioners. One gentleman said, “I’m completely shocked! Such things shouldn’t happen in today’s society.” A woman said, “Organ harvesting is terrible! It shouldn’t have happened!” Another person exclaimed, “It’s such a tragedy! It’s important to let more people know about this. I’m signing the petition to show that many people are paying attention to the persecution.”

A student commented, “The persecution is extremely cruel! It’s killing. It’s the most unfair thing in the world I have heard of! I will certainly do my best to help stop the persecution.” Another student said, “It is terrible to steal people’s organs! It is the most cruel thing of all. The persecution is definitely wrong. The earlier it ends, the better!”

A retired intelligence agent who had worked for nineteen years in the field expressed his support to Falun Gong practitioners. He knew the evil nature of the CCP very well. He indicated that the Party, which launched the persecution, would never take the initiative to stop it. But he believed that the wicked would be punished and the persecution would stop.

Falun Gong practitioner John had personally experienced the persecution when he was in China. Just for saying a fair word for Falun Gong, he was removed from his teaching position. He was later thrown into prison for distributing Falun Gong brochures. John and his fellow practitioners were tortured terribly in prison. He recounted, “I was beaten in a police station until I couldn’t walk. In a detention center, the guards directed inmates to pour cold water on me on the most chilly winter days. When I was thrown into jail, I was deprived of sleep and forced to sit on a tiny stool facing the wall. Two monitors watched me and didn’t allow me to move. We Falun Dafa practitioners were tortured like this in prison.” However, John stood firmly on his belief despite the torture. He was able to leave China eventually. His biggest wish is to end the persecution as soon as possible.

The CCP’s stated goal of wiping out Falun Gong within three months has failed. Instead, Falun Gong is now embraced by more and more people throughout the whole world.

Falun Gong practitioner Lee told a reporter that she used to have cancer. A friend introduced her to Falun Gong right after her surgery and she felt strong energy the first time she tried the exercises. She even forgot all about her wound and did the exercise for an hour, which made her feel great. Lee could tell that Falun Gong was different from other practices. She made up her mind to practice Falun Gong and has been healthy for the past thirteen years. Just like Lee, many people who tried the Falun Gong exercises at the July 20 activity decide to join the group exercises in Brisbane.