Falun Dafa practitioners from Sydney, Melbourne, Queensland, Adelaide, Canberra, and West Australia held a grand march in Sydney on September 28, 2013 to promote the teaching of Falun Dafa and to help tourists and residents know about the persecution of Falun Dafa in China. The massive procession drew attention from many passersby and was warmly received. 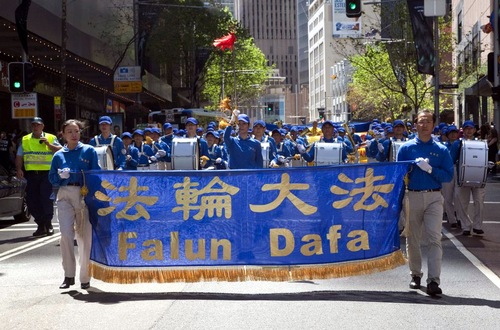 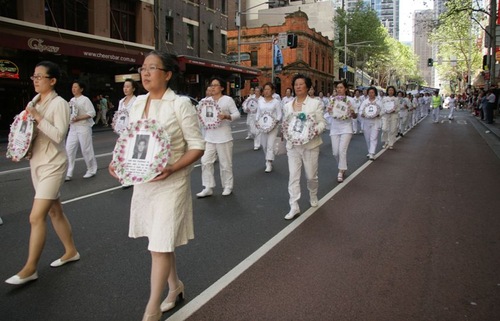 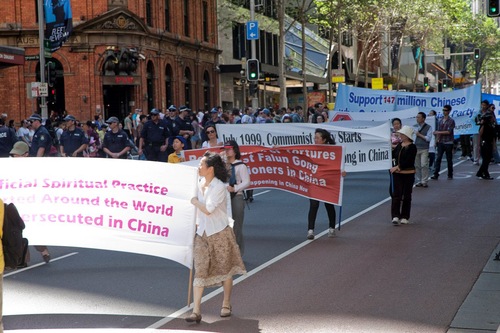 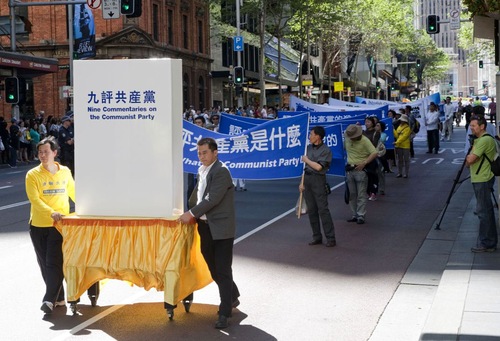 There were three themes of the procession: to demonstrate the beauty and popularity of Falun Dafa in the world, to expose the unprecedented brutal persecution in China, and to urge the Chinese people who see the evil nature of the Chinese Communist Party (CCP) and quit it and its affiliated organizations.

The march started from Hyde Park and went through Chinatown. Numerous banners and posters expressed the hearts of the practitioners saying “Faun Dafa is good,” “The world needs Truthfulness-Compassion-Forbearance,” “Stop the persecution of Falun Gong,” “No more organ harvesting from living practitioners,” and “Quit the Chinese Communist Party to stay safe.”

The Falun Dafa Divine Land Marching Band led the way. The band’s majestic music attracted passersby from far away. A giant model of the book Zhuan Falun shone in the sunlight. Many practitioners demonstrated the five peaceful exercises of Falun Dafa. Several spectators on both sides of the street took pictures of the procession and shop owners came out to get a better look.

Sydney resident Les Shone used to get fliers from practitioners when he visited Chinatown. He knew about the illegal organ harvesting. “I would like to offer help to stop the CCP’s relentless persecution of Falun Gong. It’s not enough that I signed the petition. I firmly object such brutality against humanity,” Les said. 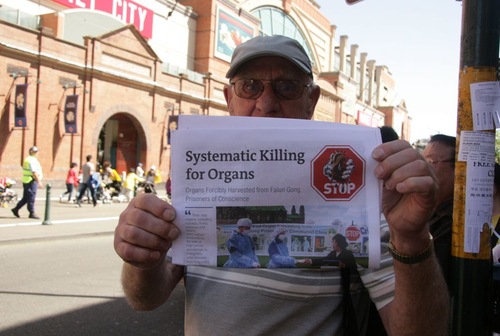 Euillaume Leguay came to Sydney from France two weeks ago. He said, “Falun Dafa’s teaching is good. It teaches kindness and how to be a good person. Suppressing so many good people is evil and stupid.”

Josie and Mary enjoyed the parade. Josie said, “It’s magnificent and touching. Their performance is exciting and unforgettable. I really support Falun Dafa.”