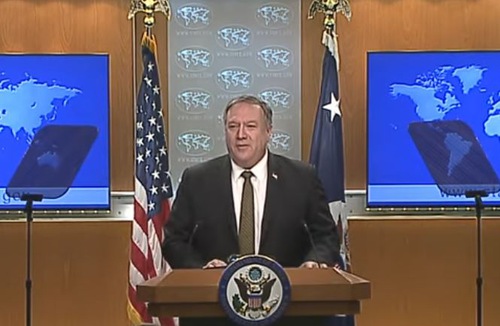 “In China, state-sponsored repression against all religions continues to intensify. The Chinese Communist Party is now ordering religious organisations to obey CCP leadership and infuse communist dogma into their teachings and practice of their faith. The mass detentions of Uighurs in Xinjiang continues. So does the repression of Tibetans and Buddhists and Falun Gong and Christians,” said U.S. Secretary of State Mike Pompeo, during the press conference for the release of the “2019 International Religious Freedom Report” on June 10, 2020.

Citation of Minghui about the Persecution of Falun Gong in China

The 2019 religious freedom report cited ten reports from Minghui.org, the official site with first-hand information about Falun Gong, including how many practitioners were arrested, harassed, sentenced and persecuted to death for their faith.

The year of 2019 marked the 20th anniversary of the persecution of Falun Gong. In the past 20 years, “The CCP maintains an extralegal, party-run security apparatus to eliminate the Falun Gong movement and other such organisations.” One of such extralegal security apparatuses is the 610 Office, a Gestapo-like organisation, established on June 10, 1999, specifically tasked with carrying out the persecution of Falun Gong.

The religious freedom report said, “According to Minghui, police arrested 6,109 and harassed 3,582 Falun Gong practitioners during the year for refusing to renounce their faith. At year’s end, 3,400 practitioners remained in custody. The arrests occurred throughout the country. Eighteen provinces, including Shandong, Hubei, Sichuan, Jilin, and Liaoning, reported hundreds of cases of harassment and arrests. According to Minghui, those arrested included teachers, engineers, lawyers, journalists, and dancers.”

“On April 17, more than 100 officers arrested 10 members of a family in Bozhou City, Anhui Province, including a mother, her five daughters, three sons-in-law, and a 12-year-old grandson. Four of the sisters stood trial on December 5 and were awaiting verdicts at year’s end.”

“Wang Shaoqing of Hubei Province and 12 other practitioners, including Zhou Xiuwu (aged 79) were arrested on March 7 for talking to others about Falun Gong in a park. According to her daughter, as of November, Wang was being held at the Wuhan City No. 1 Detention Center and denied access to her attorney.”

The report also cited from Minghui.org that the persecution resulted in 96 deaths last year, including 19 practitioners who died in custody.

The deaths happened across China throughout the year, including 82-year-old Ms. Guo Zhenxiang, who died hours after she was arrested at a bus station for talking to people about Falun Gong on January 11; Mr. Yang Shengjun, who passed away nine days after his arrest on August 2; and Ms. Li Yanjie, who fell to her death while trying to escape the arrest on December 7.

The report added that, “Minghui reported that in April authorities in separate cases sentenced 38 Falun Gong practitioners to prison terms ranging from six months to 10 years. Authorities also fined 16 of the 38 practitioners a total of RMB 249,000 ($35,800).”

“One man was convicted of ‘subverting state power’ by mailing letters about the group. He was sentenced to 10 years in prison and fined RMB 100,000 ($14,400). According to Minghui, authorities survielled the man for several months before arresting him in August 2017.

“Authorities sentenced two Falun Gong practitioners in the town of Luodai in Sichuan Province to two years and eight months in prison for removing anti-Falun Gong posters from their neighborhood. Minghui reported one 76-year-old man from Ji’nan City, Shandong Province, was sentence to three years and fined RMB 5,000 ($720) for refusing to renounce his faith.

“Minghui reported that on May 12, police arrested eight elderly practitioners in Zhuhai City, Guangdong Province, while studying Falun Gong books. The police recorded detailed information about each practitioner, including his or her children’s employment information and phone numbers, before taking them home and ransacking their residences.”

Other than Falun Gong practitioners, the lawyers who’ve represented and defended them, including Gao Zhisheng and Jiang Tianyong, were also targeted by the authorities. Gao has been missing for three years, while Jiang remained under house arrest in his parents’ village and denied access to medical care, after serving a two-year term for “inciting state subversion,” said the report.

U.S. Secretary of State Mike Pompeo at the press conference on June 10, 2020.

The religious freedom report also examined the atrocity of forced organ harvesting from imprisoned Falun Gong practitioners and how the Chinese communist regime manipulated data and how voluntary donation claimed by the government couldn’t explain the source of the organs studied in research papers or used in actual transplants.

It said, “On February 6 the peer-reviewed medical journal BMJ Open published the findings from an Australian-led academic study examining 445 scientific research papers that drew on Chinese transplant recipient data reported by the government and domestic hospitals.

The academic study found 440 of the papers (99 percent) knowingly ‘failed to report whether organ donors had given consent for transplantation,’ resulting in unethically published research.

“The study concluded, however, that the government’s voluntary deceased donor program, instituted in 2010, was not in place at the time the research for the scientific papers took place, suggesting the government and hospitals had manipulated and falsified the data. The study further concluded the only source for organs at the time was executed prisoners, including prisoners of conscience.”

“In November a second Australian-led academic study reported in BMC Medical Ethics found the government and medical bureaucracy manipulated and falsified data on organ transplants. The study concluded that rather than the ‘untarnished voluntary system promised by officials,’ a ‘voluntary system appears to operate alongside the continued use of non voluntary donors (most plausibly prisoners) who are misclassified as ‘voluntary.’ The study also said the goal of the manufactured data was ‘to create a misleading impression to the international transplantation community about the successes of China’s voluntary organ donation reform, and to neutralise the criticism of activists who allege that crimes against humanity have been committed in the acquisition of organs for transplant.’

The study noted the government formalised regulations on organ transplantation in 2006, shortly after witnesses alleged Falun Gong practitioners were being used as an organ source, which the government denied.”

The religious freedom report went to cite the final judgment issued in June by an independent tribunal established by the international NGO “International Coalition to End Transplant Abuse in China” that “forced organ harvesting has been committed for years throughout China on a significant scale and that Falun Gong practitioners have been one – and probably the main – source of organ supply.” The finding was presented to the United Nations in September.

One of them was Mr. He Lifang, who was arrested in May and died in custody on July 2. Mr. He’s family “observed a sewn-up incision on his chest and an open incision on his back. The police first said the incisions were a result of an autopsy, but his family suspected his organs had been harvested either while he was alive or shortly after his death.”

The other case cited by the report was Mr. Wang Dechen, who died after serving four years of a 10-year prison term. The prison authorities didn’t allow Mr. Wang’s family to get close to his body and pressured them to consent to have his body cremated two days after his death. They also suspected that Mr. Wang had been a victim of organ harvesting.

Comparing China to the US, Pompeo said, “There is no equivalence between our two forms of government. We have the rule of law; China does not. We have free speech and embrace peaceful protest. They don’t. We defend religious freedom; as I just noted, China continues its decades-long war on faith.

“The contrast couldn’t be more clear: During the best of times, China ruthlessly imposes communism. And amidst the most difficult challenges the United States faces, we work to secure freedom for all.”