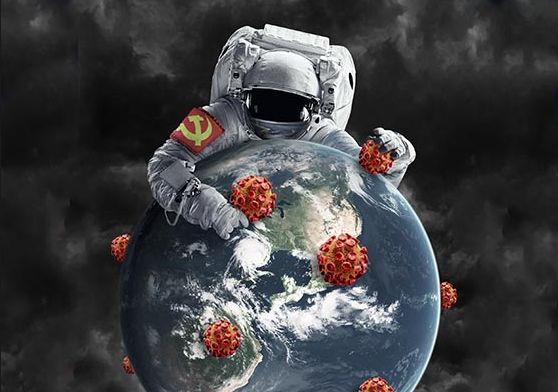 On May 19, 2011, the CCP’s mouthpiece Xinhua moved its North American headquarters to 1540 Broadway with a 20-year lease. Another mouthpiece, People’s Daily Online, became a tenant of the Empire State Building on July 13, 2011.

Since August 1, 2011, Xinhua News has maintained a 24/7 presence on a 60-by-40-foot billboard overlooking Times Square. “The sign sits atop flashing ads for Prudential, Coca-Cola and Samsung, making it one of the most visible billboards in the world,” reported NPR.

The CCP’s attempts to expand its influence outside of China didn’t go unnoticed. David Shambaugh, director of the China policy program at George Washington University, estimates China spends between $10 billion and $12 billion a year on a wide range of “soft power” efforts, from traditional lobbying and public relations campaigns to more clandestine forms of influence-building, reported the Financial Times in a December 2017 article titled “West grows wary of China’s influence game: Governments are worried about Beijing’s efforts to shape opinion of its authoritarian system.”

China Daily has been paying major U.S. newspapers for supplements or inserts, including The Wall Street Journal, The New York Times, The Washington Post, and USA Today. All the inserts are called “China Watch,” and all the content are from China Daily.

With this strategy, the CCP has targeted readers, especially world leaders, policy makers, decision makers, influencers, and those who have business interests in about 30 news outlets globally. “With the help of advertorials and targeted advertisements, Beijing is pursuing a Trojan horse policy in order to get its propaganda into the foreign media,” commented Reporters Without Borders (RSF).

In an October 22, 2019 report titled “China’s Pursuit of a New World Media Order,” RSF investigates Beijing’s strategy to control information beyond its borders. “Less well known than the Belt and Road Initiative, but just as ambitious, this project poses a threat to press freedom throughout the world,” it wrote.

“In the spirit of the Beijing regime, journalists are not intended to be a counter-power but rather to serve the propaganda of states,” says Christophe Deloire, Secretary General of RSF. “If democracies do not resist, Beijing will impose his view and his propaganda, which is a threat for journalism and democracy.”

Over the past decade, China has invested a massive amount of money in developing media capable of reaching an international audience. This includes state-owned CGTN, which broadcasts TV programs in 140 countries, and China Radio International, which broadcasts in 65 languages.

The RSF report noted, “The regime has managed to convince tens of thousands of journalists in emerging countries to go on all-expense-paid trips to Beijing to ‘train their critical mind’ in exchange for favorable press coverage.”

In the meantime, “Beijing is also exporting its censorship and surveillance tools, including the Baidu search engine and WeChat instant messaging platform,” wrote the RSF article, which also noted that “Beijing calls for intimidation and violence to silence dissidents, even in democratic nations,” to align with its own official narrative.

On February 18, 2020, the U.S. State Department designated five Chinese media outlets as Foreign Missions because they serve as state-sponsored propaganda for communist China. They are:

China has exerted huge influence on the World Health Organisation during the coronavirus pandemic.

“WHO was uncritically repeating information from the Chinese authorities, ignoring warnings from Taiwanese doctors—unrepresented in WHO, which is a United Nations body—and reluctant to declare a ‘public health emergency of international concern,’ denying after a meeting January 22 that there was any need to do so,” reported Foreign Policy on April 2, 2020 in an article titled “How WHO Became China’s Coronavirus Accomplice.”

It was already known to the public that the CCP had been lying all along since the outbreak happened in Wuhan late last year. Instead of acting impartially and objectively, WHO Director-General Tedros Adhanom Ghebreyesus kept praising Beijing for its “transparency.”

An increasing number of voices from the U.S. and other countries are calling for Ghebreyesus to resign from the WHO.

Like the WHO, the United Nations has also bent its rules because of pressure from the CCP.

A Fox News article on December 14, 2019 reported that Emma Reilly, a UN employee, sent a letter to U.S. diplomats and members of Congress on October 21, 2019, stating, “The Office of the High Commissioner for Human Rights (OHCHR) apparently continues to provide China with advance information on whether named human rights defenders plan to attend meetings” in Geneva. Some of these defenders included Tibetan and Uighur dissidents who are U.S. citizens or permanent residents.

Reilly was reported as saying that the practice went back to 2013 and was first reported in 2017. “Instead of taking action to stop names being handed over, the UN has focused its energy on retaliating against me for daring to report it. I have been ostracised, publicly defamed, deprived of functions, and my career has been left in tatters,” Reilly said.

Upon pressure from the CCP, the United Nations also denied requests from Taiwan to participate in the WHO, International Civil Aviation Organisation (ICAO), and Interpol.

In the name of cultural exchange and collaboration, the CCP has launched Confucius Institutes, donated funds, and instructed Chinese students to steal information and suppress freedom of speech on U.S. campuses.

According to the U.S. Department of Education, at least 9 top colleges in the U.S. received funding from China’s tech giant Huawei in the past 6 years, including Massachusetts Institute of Technology, Princeton University, University of California at Berkeley, and Cornell.

“Since 2004, the Chinese Ministry of Education, through an agency called the Hanban, has funded and largely run Confucius Institutes, which teach Chinese language, history and culture at colleges around the world, including the United States.

Li Changchun, a former head of propaganda for the Chinese Communist Party, called the Confucius Institutes ‘an important part of China’s overseas propaganda setup.’ They teach Chinese history the way the Chinese government would like you to see it.”

The article pointed out that universities with Confucius Institutes are required to show respect for Chinese laws. “When Hanban officials toured UAlbany, faculty members’ doors were stripped of banners referencing Taiwan,” wrote Pittinsky.

Pittinsky said that there is nothing wrong with promoting cultural exchange, but the mission of the Confucius Institutes is to export Beijing’s political views.

Worried about losing academic freedom and facing censorship from China, some universities, including the University of Chicago, the University of Illinois at Urbana–Champaign, Penn State, McMaster University and Miami-Dade College, have closed their Confucius Institutes.

Yleisradio (Yle), Finland’s national public radio station, aired an investigative report on March 15, 2020, on infiltration from communist China. “Yle found organisations in Finland that can be traced back to the control machinery of the Chinese Communist Party. Their activities have a connection with Finnish party politics,” wrote the report. “That means the influence from China is repeated the same way from one country to another.”

One such organisation is the Finnish Association for the Promotion of Peaceful Reunification of China (FAPPRC), which has about 200 branches worldwide. All of them are strong advocates for the Chinese regime.

“Experts say the organisation’s goal is to advance China’s interests and silence criticism of the emerging superpower,” wrote the report. “In fact, these associations affiliated with the Chinese Communist Party often disguise themselves as ordinary NGOs.”

Thousands of miles away, the CCP is also infiltrating the U.S. For instance, Chinatown communities in Manhattan and Flushing, New York have been controlled by the CCP for decades.

For example, the Northeast Chinese Community Federation (unofficial translation of its Chinese name) is one of three CPPRC (Council for the Promotion of the Peaceful Reunification of China) organisations established in New York.

On February 11, 2001, its predecessor organisation held a meeting slandering Falun Gong, a spiritual meditation practice that has been persecuted by the Chinese regime since 1999.

Liang Guanjun, chairman of the Northeast Chinese Community Federation’s General Committee at the time, along with former Chinese ambassadors to the United States attended the meeting and delivered speeches.

A complaint against New York Chinese Consul General Peng Keyu was filed with the U.S. Department of Justice on August 7, 2008, alleging that he conspired in violent attacks that had taken place in Flushing.

During an investigation by the World Organisation to Investigate the Persecution of Falun Gong (WOIPFG) on May 23, 2008, Peng was recorded as admitting that he had “encouraged secretly” those who were involved in a group that attacked Falun Gong practitioners.

Such anti-Falun Gong activities also took place this year. During a Chinese New Year celebration parade in Flushing on January 25, 2020, dozens of pro-Beijing people held large Chinese flags along the parade route, standing within the ranks of spectators. The group was led by Li Huahong, leader of a local communist front group in Flushing called the Chinese Anti-Cult World Alliance.

Last year, reporters from The Epoch Times and NTD Television were told by several flag bearers that they were being paid $30 to $200 by Li to hold the flags.

In March 2019, an insider told the Chinese-language Epoch Times that Li was paid by the Tianjin City Political and Legal Affairs Committee, a Chinese government agency. Other sources have also suggested that Li received funding from Chinese authorities.

“If we add to this list the deaths caused by communist regimes that the Soviet Union created and supported—including those in Eastern Europe, China, Cuba, North Korea, Vietnam and Cambodia—the total number of victims is closer to 100 million. That makes communism the greatest catastrophe in human history,” wrote David Satter, American journalist and author, in a 2017 Wall Street Journal article.

The coronavirus pandemic has become the latest catastrophe caused by communism. In the past few months, the world has witnessed how the CCP censors information, covers up infection cases and deaths, redirects blame to other countries, and spreads propaganda portraying itself as a savior inside and outside of China.

U.S. Secretary of State Mike Pompeo once said, “The people most harmed by Chinese disinformation, the fact that they covered this up early, were the people of Wuhan and Hubei, China.”

As the epidemic raged across China and grew into a global pandemic, about 75,000 people have lost their lives, about one in five people around the world are under lockdown, and numerous businesses are closed. The whole world has fallen victim to the CCP’s cover-up and mishandling of the coronavirus outbreak.

It is our hope that the U.S. and the rest of the world break free from the grips of the CCP so as to secure a brighter and better future.