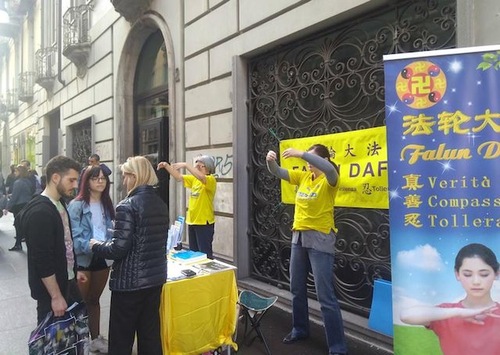 Practitioners demonstrated the Falun Gong exercises, distributed introductory brochures, and collected signatures on a petition calling for the Italian government to help stop the CCP’s atrocity of harvesting organs from living Falun Gong practitioners and other prisoners of conscience.

A number of people in the busy downtown area read the information, and many expressed their support and sympathy.

Two women stopped and asked many questions. They were appalled to learn about the CCP’s crimes against people who live by Truthfulness-Compassion-Forbearance. They signed the petition without hesitation and asked where they could learn the Falun Gong exercises.

A middle-aged couple stopped to read the display boards. When a practitioner talked to them about Falun Gong and described the CCP’s persecution, the husband said that he knew about it because he had visited a Falun Gong website and read some books and lectures.

Both husband and wife signed the petition. The man wrote down the information for the local group exercise time and location. He thanked the practitioner and said, “I will continue to read from the website and join your exercises.”

Many Chinese people stopped to read the display boards and take photos. A woman from China who now lives overseas carefully read the information about the persecution.

While a practitioner told her more about the persecution, she nodded and said she hadn’t heard about it before. She took an informational brochure about quitting the Chinese Communist Party and its affiliated organisations and said that she would share it with her family and friends.