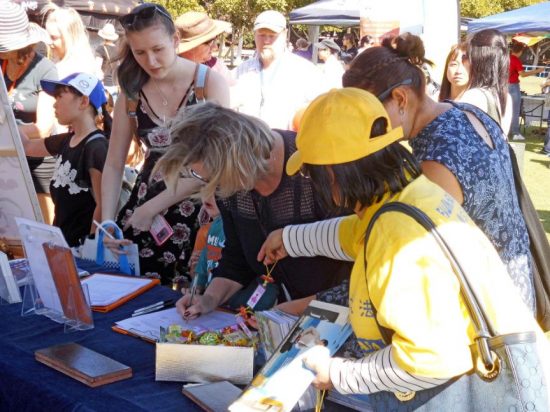 Organisers of the 2018 Gold Coast Multicultural Festival once again welcomed Falun Dafa practitioners to the annual event in Queensland, Australia.

The event is funded by Gold Coast City Council and attracts 20,000 locals and visitors each year to the touristic Southport Broadwater Parklands.

Many people who saw the exercises immediately said they wanted to learn them, and enquired about the location of the local practice site. Others who knew about the Chinese Communist Party’s (CCP) 19-year-long persecution of Falun Dafa immediately signed the petition.

The incumbent Queensland Member of Parliament for Bonney, Sam O’Connor, stopped by the Falun Dafa stall to pose for a photo and show his continued support for practitioners.

Mr O’Connor has supported practitioners on many occasions and this time was keen to hear how he could help practitioners more in his local area. He warmly invited practitioners to another upcoming multicultural event being organised in his electorate. 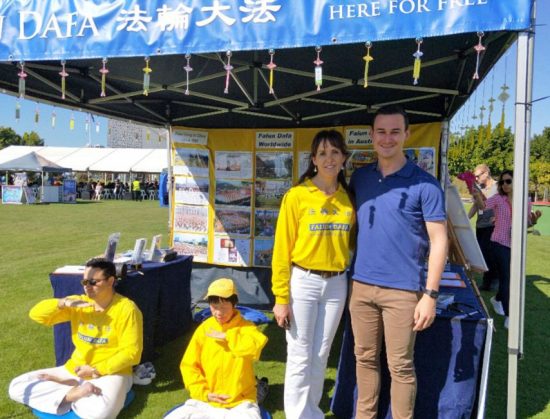 Two community liaison officers from the Queensland Police Service also visited the Falun Dafa stall, and were very pleased to see practitioners had returned to the festival this year. They took Falun Dafa fliers and signed the petition to show their support.

Some Mainland Chinese people also stopped at the stall to find-out the latest news about Falun Dafa, the persecution and Quit the CCP movement. Many of them were surprised to hear that 300 million people had renounced their affiliation with the Chinese Communist regime, and took the opportunity to quit the CCP too.

Several elderly friends and family members of a practitioner visited the stall for first time in the 18 years, receiving the latest Falun Dafa brochures, signing the petition and posing for a group photo to show their support. Some of them commented how wonderful the practice looked and, after seeing the exercises, wanted to learn and arranged for practitioners to teach them at their retirement village. 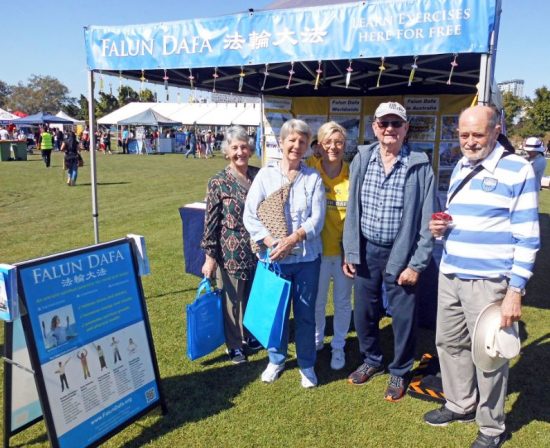 A group of elderly friends visited the Falun Dafa stall.

A specialist doctor from Melbourne said she knew about Falun Dafa and the organ harvesting in Mainland China. She signed the petition and listened to practitioners about Chinese regime’s “soft power” influence through the Confucius Institutes at Australian schools and universities that dictate which Chinese teaching materials could and could not be taught in class. She promised to find out more about independent documentary films like Hard to Believe and In the Name of Confucius when she returned home.

Garry stopped to read the a-frame sign showing the five sets of Falun Dafa exercises. He was impressed to hear one practitioner’s experience of fully recovering from his knee injury caused by practicing judo martial arts, and the positive effect the exercises have had on his wife’s continuing recovery from her chronic heart condition. Garry said he would read the information and find out more about the benefits of practicing Falun Dafa.

Event organisers also invited practitioners to come on-stage and demonstrate all of the Falun Dafa exercises. At first there were not many people in the audience but, as practitioners began showing the different sets of exercises, quite a large crowd gathered and some of them visited the Falun Dafa stall afterwards to find out how they can start practicing too. 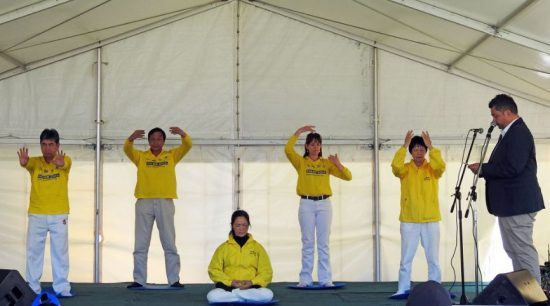 Falun Dafa practitioners demonstrating the sets of exercises on stage for all visitors to see.

Practitioners would like to thank festival organisers for making the event a success.