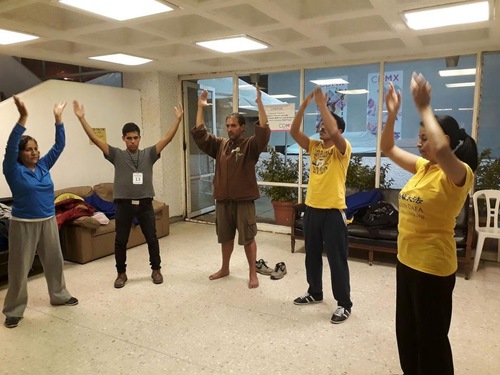 Three earthquakes shook the center and south of Mexico last month, the first on September 7, another on the 19th, and the last on the 23rd. More than 250,000 Mexicans lost their homes and hundreds were killed.

Shelters were set up for those affected throughout Mexico City, Morelos, and Puebla, the cities hit hardest by the earthquakes. Local Falun Gong practitioners volunteered to teach the people in the shelters how to do the Falun Gong exercises to help relieve their stress and anxiety.

Many people, including many youths, were living in the Villa Olympia Shelter. Many of the young men who had worked as rescuers couldn’t sleep, and they looked nervous, tired, and depressed. When they heard about the benefits of Falun Gong, they seemed encouraged.

About 30 people who learned the first exercise felt relaxed afterwards. About half of them went to bed. A man pressed his hands together in front of the chest and bowed to the Falun Gong practitioners to express his gratitude.

Another man said he really enjoyed the exercise and planned to bring his wife to the group.

Falun Gong was warmly received at the Sports Center El Rosario Shelter. A woman named Socorro said, “I always feel cold, but as soon as I learned Falun Gong, it seemed like someone had turned on the heater.”

Another lady, Dora, said, “I feel very relaxed, as if my body had just let go of something. I felt sleepy at first but later felt strong.”

A man named David said, “I feel like I’ve done this exercise before. I can concentrate now.”

A man in his 70s said, “This exercise is very special. I don’t know how long I will live, but I will always keep in my heart what I learned today.”

A man called Javier had been knocked down by a collapsing wall during the earthquake and now has to wear a neck brace. After learning the third exercise, he said, “I feel very relaxed and comfortable. This exercise is so great!” He wanted to find out more about Falun Gong.

When someone told him about the persecution Falun Gong faces in China, Javier said, “The Party wants to destroy this precious practice and destroy traditional Chinese culture! It’s so sad! Thank you for giving us support at this difficult time!”

Another man, Eduardo, said, “This is impressive. I am very, very relaxed. It’s as comfortable as being wrapped in a blanket. So wonderful! Thank you so much!”

One of the villages most affected by earthquakes was San Gregorio Atlapulco, which has 19,000 inhabitants. More than 600 houses were damaged or destroyed. People were too afraid to sleep. After learning Falun Gong, many remarked that they felt more relaxed and calmer.

A few days before the earthquake, a practitioner had a dream in which Master told her to go to the southern suburb of Mexico City. She went there with her fellow practitioners after the earthquake. A soldier who was involved in the rescue efforts asked the practitioner, “What’s that shiny thing in your hand?” She told him it was a flyer about Falun Gong. The soldier took a copy and asked, “Please tell me what it is. I know it’s something great! Please tell me!”

The practitioner told the soldier about Falun Gong. The soldier ‘s voice broke a little and his eyes sparkled as he said, “I really like it! I have been looking for a cultivation way but couldn’t find one. I have been looking for a teacher and had no luck. This is exactly what I need! Thank you! Thank you! I can guarantee that I will read the Falun Gong books and learn the exercises in my spare time.”

People in the village spread the news that Falun Gong was a great and relaxing exercise. A priest told people that there would be a Falun Gong teaching in the church on Sunday and suggested they bring their children to learn it. About 40 people learned Falun Gong in the church, including children. Their movements were surprisingly accurate, as if they had been doing it for a long time.

A man told a practitioner, “Please teach me the exercises. I need them. I feel very sad because one of my family members died in the earthquake. We will bury him today.” The man felt great after doing a Falun Gong exercise, as if something heavy had left his body. He was very grateful and brought his wife to learn, too, because her arms hurt. She said the pain was gone after learning Falun Gong.

Another man said, “I used to be nervous and confused before I learned the exercises. Now I feel much better and relaxed. I hope more people will learn Falun Gong. It’s priceless. We could never pay it back!”

A lady called Petra said, “I have been so stressed after all these disasters. Thank God someone has come to help us. These exercises are so helpful! I had such bad pain in my shoulder for so many days that I was desperate. Every day I woke up in pain. Now this exercise has helped me so much!” 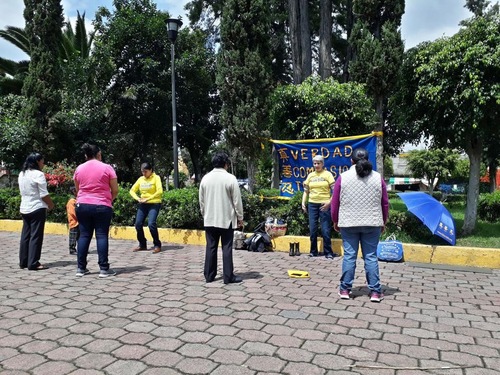 Santa Cruz Village was the first village Falun Gong practitioners visited. They realised it was their mission to help the inhabitants.

The day after their visit, a practitioner had a vision of gods in purple and golden robes in the sky sending rays of golden, purple, and blue light down onto the village. The practitioner realised that Master had shown her this scene as a reminder of her prehistoric vow to save the villagers of Santa Cruz.

The coordinator of the Altavista Shelter in Cuernavaca introduced a practitioner to the community. In addition to teaching the exercises, the practitioner taught the children how to sing the song “Falun Dafa Is Great” when they panicked during a storm. It dissolved their fear. 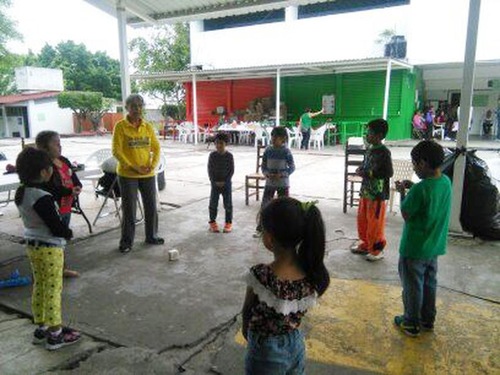 A Shelter in Jiutepec, Morelos

22 families affected by the earthquakes were housed in a shelter in Jiutepec.

Practitioners read Stories of Wisdom to the children, and the children painted while listening to the music of “Pudu.”