Falun Gong practitioners in Greece visited the cities of Patra and Corinth, two cities on the Mediterranean Sea, on October 14, 2017 to introduce this ancient meditation practice from China.

Patra is the third largest city in Greece. After seeing information about the free exercise teaching, about 50 people came out to the learn this meditation practice on the beach in Patra. The beautiful exercise music attracted the attention of many tourists along the beach. They stopped to pick up pamphlets and ask questions about the practice.

One woman said that she had studied Tai Chi and Yoga in the past. “This is the first time I have tried Falun Gong, and I could feel a pure and righteous energy. It’s amazing,” she said, adding that she had not experienced this before and would like to continue studying Falun Gong.

Another woman agreed, “I can tell that I am surrounded by energy. The wonderful feeling is beyond description.”

One young man said that he had encountered Falun Gong in Japan and learned the exercises from practitioners there. He was glad to meet practitioners again and resume learning the practice. 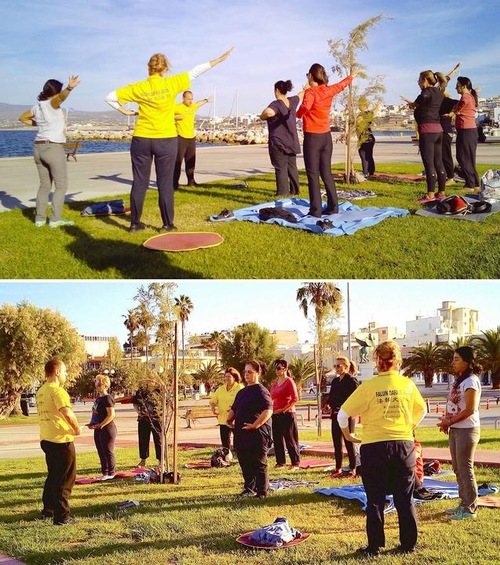 Many people said that they noted a strong energy field while doing the Falun Gong exercises.

Many people said that they could not understand how such a good meditation system could be suppressed in China. Because they enjoyed the exercises so much, they planned to join the local group practice regularly.

When practitioners arrived at the beach in Corinth, seven or eight people were already waiting there. Some read the informational materials and others talked with practitioners to learn more. One young man said that it was too bad that this practice has been banned in China.

After learning the exercises, people remarked that they felt very good and enjoyed the energy field. One woman shared that she had difficulty at first raising her arms to do the second exercise, but that it became much better as she continued. “Thank you so much, Falun Gong!” she exclaimed.