The art exhibition was held at the Tsichritzis Foundation for the Visual Arts, a well-known art gallery located in the heart of Kifisia’s affluent commercial centre. 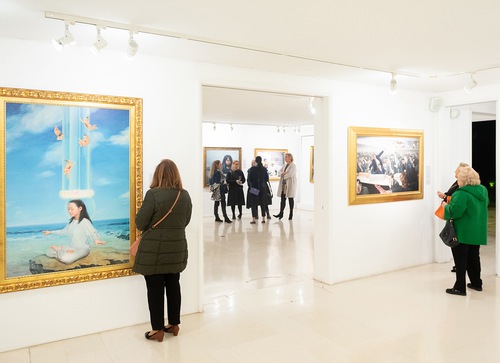 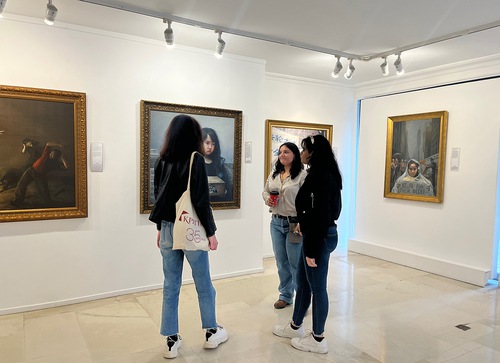 Visit By a Chinese Family

Ms. Xu toured the art exhibition with her parents. She told practitioners she started doubting the CCP’s media propaganda about three years ago. After realising the truth behind the lies of the CCP, she and her family immigrated overseas.

After leaving China, Ms. Xu heard how the CCP persecutes practitioners. She also read the book, Nine Commentaries on the Communist Party. “My child and I have cut off all ties from it (the CCP). This is what we solemnly swore to God in our hearts.” Ms. Xu explained that she and her family were CCP members. After learning the truth, she asked practitioners to help her and her family withdraw from the CCP.

“While vacationing in Europe, I saw practitioners distributing leaflets. They told me in China, organs from Falun Dafa practitioners were illegally harvested. I could hardly believe it was true.” Practitioners reassured her, “It’s human kindness that limits our ability to accept this is real.” Ms. Xu agreed and said, “Later, I learned they spoke the truth. The CCP not only kills Falun Dafa practitioners but also harvests organs from other citizens, including political prisoners and people from Xinjiang. This is simply too evil!”

Initially, many people treated Falun Dafa’s persecution with indifference, thinking it had nothing to do with them. However, the CCP recently began using these persecution methods across the population in China. Entire societies and individuals have become victims of the CCP’s unreasonable measures.

Ms. Xu’s father used to be a staunch supporter of the Communist Party and condemned anyone who badmouthed the CCP. This spring, relatives and friends began to relay news about the extreme lockdown imposed in Shanghai. Mr. Xu listened to their firsthand accounts of the extreme epidemic prevention policies and corresponding tragedies caused by the CCP’s anti-virus measures. Reputable media also exposed the extreme conditions suffered by those in mainland China. As he compared his calm overseas life with the chaos faced by those living in China, he slowly started to come around.

After viewing the art pieces on display in the exhibition hall, Mr. Xu quietly sat and listened as his daughter and wife chatted with practitioners.

“My father has started to change his views, but he needs more time to truly accept it,” Ms. Xu said. She continues to show her father true news reported by the media. When he is finally able to accept the truth, she hopes to help him quit the CCP.

Kelly studied fine arts in Paris and praised the paintings for their high level of artistic skills. Her friend Elini, a music composer and practitioner of meditation, found herself relating to the work “Entering the Divine Realm with Purity.” The painting depicts a child watching the growth of his meditating mother in other dimensions, and she said it deeply touched her.

In their shared guest book message, Kelly and Elini wrote, “This is a wonderful exhibition. We hope it can touch the hearts of others like us.”

Despoina visited the art exhibition with her husband. Works embodying the otherworldly aspects of cultivation caught her interest, and she chatted with practitioners about her understanding of cultivation. In her message, she wrote, “Joy and happiness, strive on in life, until salvation.” On learning that Falun Dafa originated from China, Despona responded in Chinese, “Thank you!” She then expressed her gratitude to practitioners for bringing these beautiful works to Greece. She took information about Falun Dafa home to read.

After visiting the art exhibition, Maria wrote in the guest book, “On New Year’s Eve, I visited this very extraordinary art exhibition. Capturing both real and otherworldly imageries, the concepts of resistance, hope, moral values, and Truthfulness-Compassion-Forbearance were displayed throughout the pieces, which also depicted the contrast between good vs evil, truth vs lies, and light vs darkness. Joy can be derived from the strength of faith. Purity and light are universal constants that tug at our souls. May the light in our hearts continue to burn brightly and strive for the well-being of all. Happy New Year and best wishes.”

Visual artist Tina wrote, “This exhibition is unique and wonderful. I hope the West will realise and step in to stop the crimes against Falun Dafa practitioners. I will always remember this. Thank you very much.”

Marina wrote, “A great exhibition showing the shocking reality faced by Falun Dafa practitioners under persecution. Truthfulness-Compassion-Forbearance will prevail, and those guilty should shudder in fear. A deeply touching and inspiring exhibit.”

Ageliki wrote, “I am shocked, disgusted, and saddened to learn of the (CCP’s) crime for the first time. Please continue your efforts to educate people through art. Truthfulness-Compassion-Forbearance will prevail in the end.”