(Minghui.org) BioCultura Madrid 2022, the largest natural health fair in Spain, was held in the capital city, Madrid, from November 3 – 6, 2022. This was the first health fair held in Spain since the COVID pandemic began. The exhibition lasted four days and attracted about 50,000 visitors from around the country. 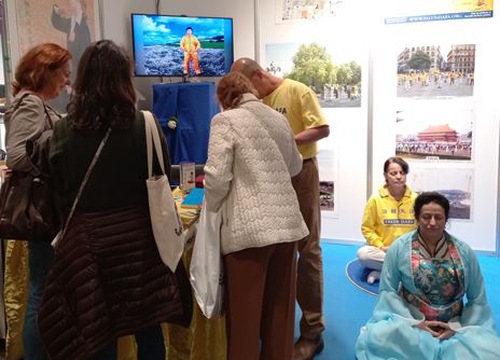 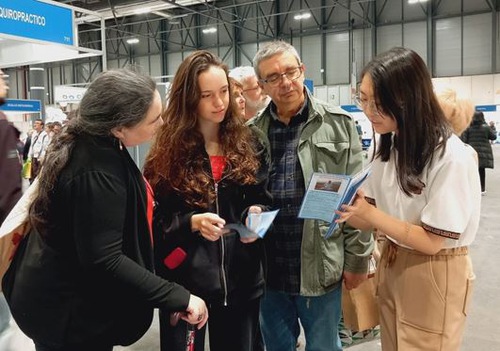 Many visitors said they agreed with the principles of Truthfulness- Compassion-Forbearance, which Falun Dafa is based on. Some said that Truthfulness, Compassion and Forbearance are what modern society needs, while others said that these principles can guide people and help them strive forward during difficult times.

People were attracted by Falun Dafa’s peaceful exercise music and graceful exercise movements. Many said that they could feel a pure and righteous energy at the booth. Although the number of booth holders and visitors were relatively fewer this year due to the pandemic, a continuous stream of visitors came to the Falun Dafa booth to ask for more information and learn the exercises. 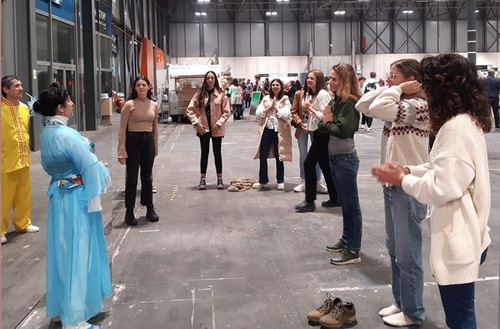 Ms. Cristina Vilches, an artist, said, “This is the second time I’ve met Falun Dafa practitioners. I feel a great and pure energy here. It is very strong.” Tears welled up in her eyes and she added, “I must follow the inner voice in my heart and learn Falun Dafa.”

Ms. María Fernández stopped and watched video of the exercise demonstration for a long time. She said, “This is what I’ve been looking for all this while. I feel very peaceful in front of your (Falun Dafa) booth. For many years, I suffered from anxiety. I need tranquility. Truthfulness, Compassion and Forbearance are what the modern world needs. The whole humankind needs them.”

A visitor named Ada said, “Falun Dafa is great! I spent a long time looking through all the information and thought about it for a long time. When I passed by the Falun Dafa booth, I felt great energy. I feel that my coming here today is not a coincidence. There must be some reason I’ve met you. There seems to be an energy that guided me here.”

Ms. Paz said, “I feel a strong and great energy here. It’s comforting and peaceful and wonderful. I am a reiki healing master and I can feel all sorts of energy. Standing here I feel like I’m in a magnificent and grand temple. The energy here is so full and harmonious that I don’t want to leave. I want to learn more about Falun Dafa and I also want to learn these exercises.”

Ms. Patricia Barrera said her yoga teacher told her about Falun Dafa and how it is persecuted in China. Ms. Patricia feels that the Chinese Communist Party (CCP) is persecuting good people. She also said that she felt very strong energy at the booth.

María José passed by the booth with her nine-year-old daughter. She said she often goes to Buddhist temples. “Sometimes, I ask my daughter to accompany me,” she said. “This righteous cultivation practice, Falun Dafa, which abides by the principles of Truthfulness, Compassion and Forbearance, is also very attractive to me. I will definitely go to the practice site.”

Pilar is an educator who traveled from a northern city to attend the fair. She said that she saw Falun Dafa practitioners collecting signatures at the Puerta del Sol in Madrid more than 20 years ago. At that time, she was shocked by the tragedy of Falun Dafa being persecuted by the CCP so she signed the petition without any hesitation. She wanted to learn to practice, but there was no practice site in her city. She finally met practitioners again so she was very happy. She bought Zhuan Falun and said that she wants to teach the children in her school to practice the Falun Dafa exercises after she learns them herself. She said that more people should know about such a good practice.

José, another visitor, said, “People do not have a correct spiritual principle to guide them in their daily busy and hectic lives and their complicated interpersonal conflicts. Falun Dafa and its principles of Truthfulness, Compassion and Forbearance are what modern society needs.”

Ms. Carmen Fraile was attracted by the slow and serene exercise movements. She said, “I read and was looking for matters that are related to a new spiritual level, and practices that can prolong one’s life. When a person does these gradual and slow movements, his life and everything will be slowed down. I am very interested in the Falun Dafa exercises so I will definitely learn it.”

There were many touching stories during the fair. After conversing with practitioners, a woman brought her mother, husband and daughter to the booth the next day to learn the exercises. She said that Falun Dafa is very unusual and she felt that she was very lucky to be able to find it and meet practitioners. As such, she brought her whole family to the Falun Dafa booth.

On the last day of the health fair, a member of the Spanish royal family came to the Falun Dafa booth and accepted flyers and a small lotus flower keepsake with the words Truthfulness, Compassion and Forbearance written on it. He kept saying, “Thank you! Thank you!”

Two elderly ladies who came together learned how the CCP persecutes Falun Dafa. One said, “Everyone who has a conscience should stand up to end the persecution. I hope that this tragedy will soon end.”