Skip to content
Nov. 6, 2022 | By a Falun Dafa practitioner in San Francisco

Ms. Zhao Chen, a local Falun Dafa representative, addressed the rally and said that two people were seized during the 20th National Congress of the Chinese Communist Party (CCP). She stated, “During this period, many practitioners were harassed and arrested for no reason. Even elderly practitioners are targeted.” 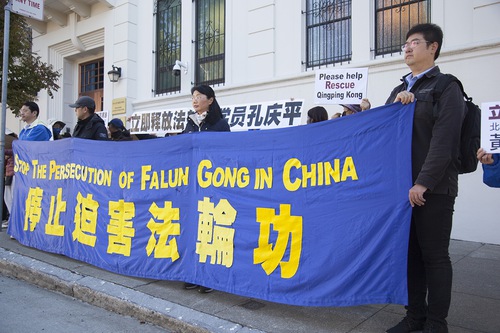 Ms. Liu Zhitong, Ms. Kong Qingping’s daughter, said that she is so concerned about her mother’s safety that she hasn’t been able to sleep. She choked up several times while she spoke at the rally. Ms. Liu said that she learned of her mother’s arrest through a family member. Her mother was taken away on October 22, and she is detained in the Yaojia Detention Centre in Dalian City. Her family have not been allowed to visit.

Ms. Liu said that her mother was diagnosed with serious sepsis in 2004. She already had more than twelve diseases and her health deteriorated further. Out of desperation, and encouraged by her family, Ms. Kong began to practice Falun Dafa.

“It was amazing that within less than a month after my mother started practicing, her health improved significantly,” Ms. Liu said. “Her symptoms disappeared. The relationship between my parents became harmonious.

“What’s even more unexpected is that the rash on my mother’s face disappeared. Her complexion became rosy. Everyone was amazed and happy for her when they saw her amazing changes.”

Ms. Liu said that Falun Dafa teaches people to live according to the principles of Truthfulness-Compassion-Forbearance. After people begin practicing Falun Dafa, their health and morality improve. She said that her mother’s positive changes are one of the best examples of the positive benefits of Falun Dafa.

Mr. Huang Changyu, a resident of the Bay Area, said that his mother came to the United States to take care of his newborn son, and his father, Mr. Huang Yongchang, lived alone at home in Beijing. He was forcibly taken away by the CCP authorities.

“It’s been 23 days, and I haven’t been able to communicate with my father. The CCP does not allow family members to visit him,” Mr. Huang said.

Mr. Huang Changyu’s father, Mr. Huang Yongchang, is a retired professor from the Institute of Theoretical Physics at Beijing University of Technology. He started practicing Falun Dafa in 1995 and his health and temper improved. He no longer needed eyeglasses, and he became kinder toward his son.

Mr. Huang said that his father worked for more than 20 years and trained more than 30 masters and doctoral students. However, since the CCP began persecuting Falun Dafa in 1999, his father was arrested three times and his promotion to full professor was delayed for six years. Despite his difficult situation, he always helped his graduate students.

Both Ms. Liu and Mr. Huang said that they would do their best to secure the release of their parents. They are planning to meet with their congressional representatives to ask for their help.

Ms. Chen Zhenbo, who also lives in the Bay Area, demanded that the CCP immediately release her friend Ms. Hou Baoqin, a Falun Dafa practitioner who is also imprisoned for her belief.