(Minghui.org) Practitioners held the third Art of Zhen Shan Ren International Exhibition in Ruocco Park, San Diego on October 29, 2022. The park is a popular scenic attraction with views of San Diego harbor, the USS Midway museum and the famous “The Kiss” statue. The park is also is adjacent to a large conference centre, and many conference attendees and tourists visit. 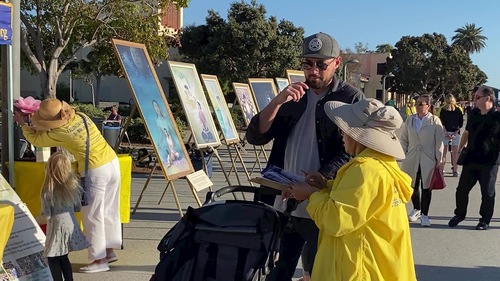 Canadian Couple: We must end this cruel persecution

A Canadian couple carefully looked at every piece of art and read all of the descriptions. They were shocked when they learned that people in China were tortured and killed by the Chinese Communist Party (CCP) because of their belief in Falun Dafa and its principles of Truthfulness-Compassion-Forbearance.

They signed the petition to end the persecution and the husband said with emotion that Truthfulness-Compassion-Forbearance is the hope of this world and it was unbelievable that such a thing could happen in today’s China. “We must end this cruel persecution by the CCP! I hope our signature can help,” he added. 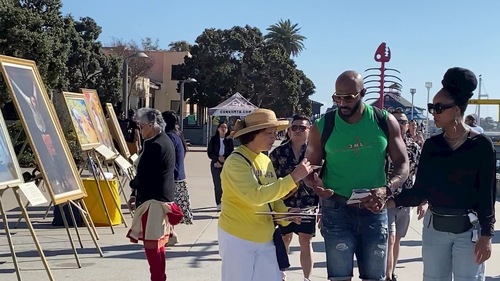 Sadith, a Peruvian scholar attending an international conference in San Diego, was deeply moved after viewing the artwork and wanted to know more about Falun Dafa. She asked a practitioner why the CCP persecutes it. When she was told about the persecution, she was even more moved by practitioners for adhering to their beliefs even though thousands had been jailed and killed.

She asked for a contact number for local practitioners after signing the petition. She purchased a copy of Zhuan Falun and looked forward to learning more.

Tourists Learn about the Persecution

A couple from the Philippines signed the petition after viewing the artwork. The wife said that her grandmother was Chinese and she liked traditional Chinese culture. “But I don’t like communist China where people have no freedom of belief. I support your effort for freedom of belief,” she said.

Rachel said that she’s been searching for the meaning of life for years and read many books about cultivation. When she heard that Falun Dafa is a high level cultivation, she bought a Zhuan Falun on the spot.

Roxanna, an artist living in San Diego, stopped to look at the artworks on her way to work. She signed the petition and took the address of a local exercise practice site. She did not have to work the following day so she planned to go there and learn the exercises.