(Minghui.org) Falun Dafa practitioners in Italy held a series of activities in Florence from July 16 to 18, 2022 exposing the ongoing persecution in China. They collected signatures calling for an end to the 23-year-long persecution.

Piazza di Santa Croce is one of the main squares in the ancient historical center of Florence. The Basilica of Santa Croce is a very important national monument.

Practitioners gathered at the plaza on the morning of July 16, where they set up an information booth, distributed fliers, demonstrated the exercises, and clarified the truth about the persecution.

Many Italians and foreign tourists stopped to watch the exercise demonstration and read the display boards about the persecution in China. Many people signed a petition calling for an end to the persecution.

Two students from the Florence Conservatory stopped by and took leaflets and lotus flowers. They came back and took two more lotus flowers for friends who accompanied them. They read through the display boards and asked why the persecution had happened in China. They could not understand that such a cruel persecution exists in the world today. But they were convinced that those who are able to do such horrific things to innocent practitioners are exploited by the evil regime, the Chinese Communist Party (CCP). 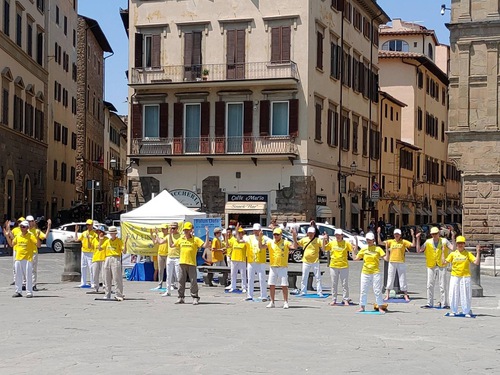 Peaceful Protest Outside the Chinese Consulate

A woman and her child walked by. She called out, “Falun Dafa hao (Falun Dafa is good)!” and encouraged her child to repeat it after her.

Another woman encouraged a practitioner, who gave her a flier, to persevere. She said, “People who meditate can become invincible, because they have found their true self. Let the evil be afraid.” She then asked if she could hug the practitioner. They hugged for a long time, and the woman was moved to tears. 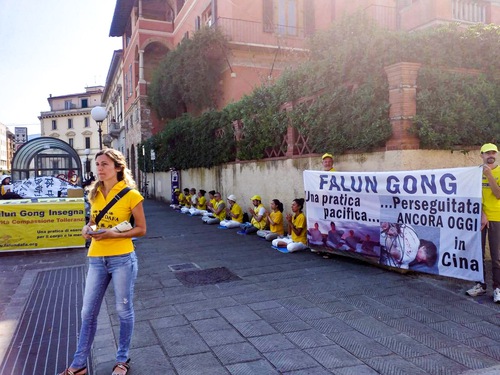 Practitioners did the exercises in a park on the morning of July 17. Later on in the afternoon they shared cultivation experiences at the hotel where they were staying. Many shared the challenges they faced when cultivating over the past two years, and how they finally overcame the tribulations by strengthening their belief in Master Li (the founder of Falun Dafa) and the practice. 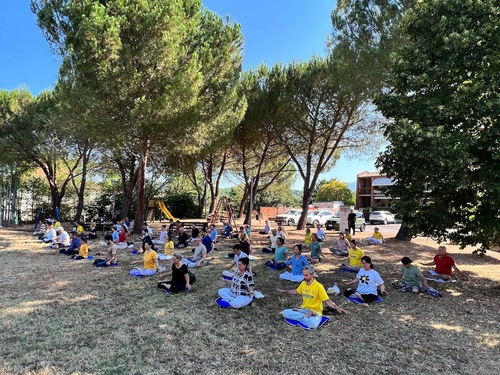