(Minghui.org) Over 1,500 practitioners gathered at the National Mall in Washington D.C. on July 21 to call for an end to the persecution of Falun Gong in China.

With the U.S. Capitol in the background, rally speakers highlighted the growing awareness of the forced organ harvesting of detained Falun Gong practitioners and the Chinese Communist Party (CCP)’s threat to the world.

“America is finally waking up to the threat posed by China. And we all need to hear your story, understand how brutal the CCP has been to you, and learn from your experience,” Rep. Steve Chabot from Ohio told the audience. He’s also the ranking member of the Asia, the Pacific, Central Asia, and Nonproliferation Subcommittee under the House Foreign Affairs Committee.

“Forced organ harvesting is one of the most barbaric practices in human history. And it’s past time for real accountability,” he said, adding that Congress must take “aggressive actions” against the crime.

Two bills addressing this crime against humanity are pending in the U.S. Congress: the Stop Forced Organ Harvesting Act and the Falun Gong Protection Act. Both must pass this year, or they will have to be reintroduced in 2023.

The former bill will sanction those responsible for forced organ harvesting and prohibit the export of medical devices used in the grisly practice. In March 2021, Senators Tom Cotton and Christopher Coons introduced the Senate version, and Representatives Chris Smith and Thomas Suozzi introduced the House version.

The latter bill will sanction individuals who are involved in or have contributed to the forced organ harvesting of Falun Gong practitioners. It will also ask the State Department to evaluate whether the persecution constitutes genocide.

The China Tribunal found in 2019 that the Chinese regime had for years been killing detained prisoners of conscience—primarily Falun Gong practitioners—for their organs to supply the organ transplant market on a “significant scale,” a practice which continues today.

July 20, 2022 marked 23 years since the Chinese Communist Party launched its sweeping campaign to eradicate Falun Gong, a spiritual practice involving meditative exercises and moral teachings based on Truthfulness-Compassion-Tolerance. The practice drew an estimated 70 – 100 million practitioners in China by 1999. However, the CCP perceived it as a threat to the Party’s authoritarian control over society. 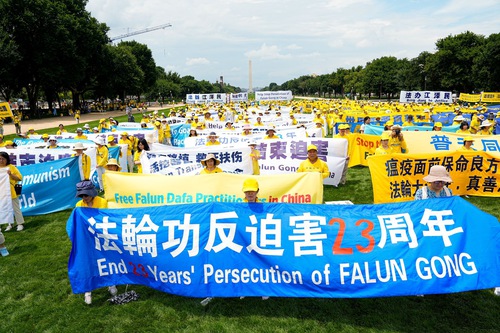 “Millions of people who practice Falun Gong in China have been imprisoned, tortured, or killed,” Representative Gus Bilirakis from Florida said in a video message to rally attendees. “If we remain silent in the face of these transgressions, we neglect that moral imperative and do so at the peril of civil society.”

In his video speech, Senator Ted Cruz from Texas echoed, “America has an obligation to uphold and promote the ability to practice religion free of government hindrance. Allowing the Chinese Communist Party to continue this vicious cycle of persecution without consequences is a dereliction of moral duty.”

Representative Eleanor Holmes Norton from Washington D.C. said in her video greeting to the rally attendees, “Freedom of speech and religion are bedrocks of our nation. And we must work to preserve these freedoms both here and abroad.”

The CCP’s suppression and violence remind us that basic human rights must not be taken for granted. “We must fight to raise awareness of those persecuted in China who cannot raise awareness themselves. I support the many individuals calling for freedom in China, including Falun Gong practitioners. I hear you and stand with you today and every day,” she explained.

Ambassador Andrew Bremberg, president of the Victims of Communism Memorial Foundation (VOC), a Washington-based advocacy group, urged the U.S. Congress to take the lead in passing the bill so other countries could follow. “It is now known that due to CCP policies, highly trained surgeons have, for decades, been turned into executioners of prisoners on the operating table,” he said, referring to the findings of VOC fellow Matthew Robertson’s April paper in the American Journal of Transplantation.

Matthew Robertson from Australian National University and his team researched 124,770 articles that Chinese transplant doctors published in medical journals and concluded that organs of “donors” were removed before they were dead and that the organ removal was the actual cause of death for these “donors.”

Piero Tozzi, a senior adviser to Representative Chris Smith, thanked Falun Gong practitioners for exposing the crimes of forced organ harvesting. “Sadly, it is you, the Falun Gong, who, because of your clean living and good health, have been targeted by this horrible, horrible practice,” he said. He told the audience that the Tom Lantos Human Rights Commission, co-chaired by Representative Smith, held a May hearing documenting forced organ harvesting in-depth.

Commissioner Eric Ueland of the U.S. Commission on International Religious Freedom (USCIRF) said the religious freedom condition in China had rapidly deteriorated in the past decade.

“Not since the worst day of the Cultural Revolution have you seen such widespread and terrible persecution of religious communities in China, including the Falun Gong,” Ueland said at the rally. He said USCIRF had repeatedly spotlighted the persecution of Falun Gong and that some practitioners had even “died at the hands of Chinese officials.”

“This shocks the conscience and should seize our souls,” he said. He also mentioned the Stop Forced Organ Harvesting Act and said that people should propose more new ways to resist the persecution.

Christina Sturgeon, assistant of the Executive Director of Jubilee Campaign USA, spoke on behalf of her organisation. She focused on the CCP’s persecution of minors. An example was Vivian, who began practicing Falun Gong at 13. The persecution started soon after she took up the practice.

At her boarding middle school in China, Vivian’s classmates climbed into her bed in the upper bunk in the middle of the night and slapped her to wake her up. They told her that she was crazy, and tried to make her kill herself by jumping out of the window. She was just 13 years old.

In her testimony to Friends of Falun Gong, a human rights organisation, Vivian recalled, “They [classmates] forced me to the ground and opened the window. I remember it was very chilly, and they pushed my head out the window and said, ‘Jump. You jump from here. You should not live.’”

Sturgeon said the aim of the CCP’s persecution of Falun Gong was the ideological control of the masses. And the CCP equates pro-atheism to pro-CCP and pro-China.

Annie Boyajian, a vice president at the human rights organisation of Freedom House, said that the persecution of Falun Gong had worsened over the past five years, especially during the pandemic. She also worried that Falun Gong practitioners and Catholics in Hong Kong might be targeted in the coming year.

“Many may not know that some of the architects of repression in Xinjiang perfected those techniques on Tibetans and Falun Gong practitioners,” she said.

Sean Nelson, legal counsel for religious freedom with the Alliance Defending Freedom International, also attended the rally. “Every year, you have 100 Falun Gong who are persecuted and killed by the Chinese Communist Party. Every year you have thousands who are arrested and interrogated just for practicing their faith, practicing their beliefs, and wanting to live those out freely.” he remarked.

“It’s incredibly heartening to see so many of you out here, standing up for the defense of religion and belief, peacefully practice anywhere, and standing up against the Chinese Communist Party,” he added. In fact, for anybody who does not see the CCP as the centre of their life, or anyone who practices anything that the CCP does not agree with, the CCP wants to make sure that they are silenced.

Nelson said the evidence for forced organ harvesting was “overwhelming’ and “undeniable.” “Major international institutions and organisations are recognising it and are joining with you in your fight for freedom,” he added.

Arielle Del Turco, assistant director of the Center for Religious Liberty at the Family Research Council, said the CCP is the biggest threat to human rights. “We must stand up against the persecution and China, both for the millions who have already suffered and for the millions more who face increasing repression every day,” she said, “Today we demand religious freedom in China for Falun Gong practitioners and all people. And we demand that the CCP be held accountable for its actions.”

Darren Spinck, Associate Research Fellow at the Henry Jackson Society, said it was time to designate the persecution of Falun Gong as a genocide because the large-scale forced organ harvesting constituted the intention to eradicate the faith group. He suggested the U.S. government ban exports to places in China responsible for forced organ harvesting and sanction the CCP officials involved in the crime.