(Minghui.org) Falun Dafa practitioners gathered together to form the Chinese characters “30th Anniversary of the introduction of Falun Dafa” in front of the Walt Disney Family Museum near San Francisco’s Golden Gate bridge on May 14, 2022. They did so to celebrate Falun Dafa Day and the founder, Mr. Li Hongzhi’s birthday.

The day began with practicing the exercises at 9 a.m. Many passersby said they were amazed by the calm, orderly scene and stopped to watch and take photos. 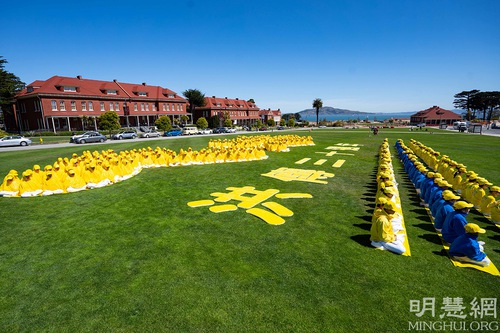 Lisa Ellsmore and her family of five all practice Falun Dafa. They were delighted to participate in the day’s activities celebrating Falun Dafa day. Ms. Ellsmore who began to practice in 2003 said she became a practitioner after her husband took it up. “I quit smoking and drinking after practicing cultivation. I became more patient and my relationship with family members improved. My health was better too.”

“We are here today with other practitioners to celebrate Falun Dafa Day and Master’s birthday. Happy Birthday Master.”

Maia Ellsmore is overjoyed to celebrate Falun Dafa day with her family. “I have been practicing since I was a small child and it has brought me many benefits. I am healthy and more tolerant. My friends say I am calm and friendly. They love being with me.”

She participated in the character formation hoping that people will know, “The persecution of Falun Gong is still taking place in China today and this is not right.”

Maia said, “I am grateful to Master for his compassionate salvation.”

Wants to Inform People About the Persecution of Falun Gong

Wang Jianzhong is a Falun Gong practitioner. He is a well known calligraphist in China. He hopes more people in China will understand the truth about the practice through the character formation activity.

He was hit by a motorcycle while crossing the road in Shandong Province, China on March 1, 1998. He was admitted into hospital for a brain concussion. His friend told him Falun Dafa is amazing at healing illnesses. He got a copy of Zhuan Falun and, “In less than two days, I read the book from cover to cover. My body felt great after reading the book. In less than a month, I recovered from my injuries.”

“Indeed Falun Dafa has extraordinary powers in healing illness. It requires practitioners to follow the principles of Truthfulness, Compassion, Forbearance. I made up my mind to practice it diligently.”

He used to be quick tempered in the past and had conflicts with family after drinking. “I quit drinking after I began practicing Falun Dafa. My temper improved and I got on well with my family.”

The Chinese Communist Party (CCP) began to persecute Falun Dafa (also known as Falun Gong) on July 20, 1999. Wang arrived at Tiananmen Square on January 1, 2001 and saw many practitioners holding banners with the message Falun Dafa is Good. He was moved and handed out information on the practice to people. He was arrested by 5 police officers. He kept shouting: “Falun Dafa is good, Truthfulness, Compassion, Forbearance is good!”

He was taken to the No 1 Detention centre in Beijing. He was stripped naked and detained for two days and nights. The temperature was below 10 degrees and water turned into ice. It was freezing cold. His limbs were so cold and numb that his skin cracked.

“I went through all this because I refused to give up my faith in Falun Dafa. Today is the 30th-anniversary of the public introduction of Falun Dafa as well as Master Li’s birthday. I am here today to tell everyone sincerely that Falun Dafa is the Buddha Fa. I hope people learn the truth and quit the CCP.”

Started to Practice After Reading a Great Book

Li Gang is from Shandong Province, China. He loved to read books. In 1996, he was a post-graduate student. One time, his classmate put Falun Dafa’s main book Zhuan Falun on his desk. He picked it up and started to read it. “ I thought the book was well written. The teachings moved my heart and answered many questions I had. I thought to myself: I must practice this.”

“I knew how to practice cultivation through studying the teachings more in-depth. Practicing cultivation is to get rid of human attachments. I gradually got rid of the bad thoughts in my mind and my thoughts are cleaner.”

Like other practitioners in China, he stepped out to tell people the facts after the CCP began to suppress the practice. “I was arrested while giving out information in Qingdao City in 2002. I was sentenced to 4 years in prison and detained at Weibei prison.”

He was tortured for refusing to give up the practice, and for teaching other inmates about Falun Gong. “I was shocked with electric batons for a long time. Some practitioners were brutally tortured.”

Li Gang said the character formation was a great way to help people learn about Falun Dafa and the persecution. “We want to let more people realise Dafa is wonderful and the Party is bad.”

Grateful to Master for Teaching Us Falun Dafa

Manny Gonzalez began to learn Chinese in August 2020. He saw a video online “Learn Chinese Now”. The program mentioned Falun Dafa. “I was interested in Buddhist qigong then. I searched online and began to read Zhuan Falun. I also started to learn the exercises. I discovered Falun Dafa is unlike the CCP’s propaganda.”

“I was moved by the principles of Truthfulness, Compassion, Forbearance. I think we should follow these principles in life and become a better person.”

He used to get upset easily. “I got angry very easily. After practicing Falun Dafa, I changed a lot. Although I am not able to refrain from getting angry all the time, I try my best to treat others kindly. I try to control myself and be calm when I get stressed at work.”

Gonzalez said he came today to tell people Falun Dafa is a righteous way. “If you want to practice cultivation, Falun Dafa is the best.”

“ I thank Master Li Hongzhi for teaching us Dafa and the benefits it has brought us.” 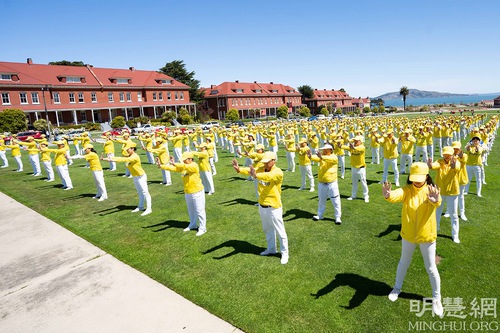 Many tourists were moved by the grandeur of the character formation and positive energy. They expressed admiration for Falun Dafa practitioners’ perseverance in exposing the persecution and think Truthfulness, Compassion, Forbearance are universal values the whole world should recognise.

Justin is a local car park manager and supports Falun Dafa. He said, “Many people love to hold activities on this grassy area. I seldom see so many people coming together for an event. Falun Dafa practitioners are peaceful. The principles Truthfulness, Compassion, Forbearance are excellent. I support them in fighting for freedom of belief. Everyone should enjoy such freedom. What the CCP does is evil.”

Mike Ramarous, who was out for a walk this day, said it was the first time he heard of Falun Dafa. When he learned that Falun Dafa can improve one’s health and help eliminate bad habits, he said, “Wonderful, this is what I need. Thank you.”

He was shocked to hear of the persecution and organ harvesting. He said, “It’s terrible, the CCP murdered these people just because they practice this and have their beliefs. This is horrifying. Thank you for telling me this.”

Latifa Popal, a teacher at Saint Mary’s University in California, stopped when she walked past the character formation. She asked what they were doing. When practitioners explained to her about Falun Dafa and its principles, she said, “This is excellent. I want to follow these principles as well. Thank you for being here today to help people learn about Falun Dafa.”

She was shocked to learn of the brutal persecution in China and said, “Oh my god! This is horrifying. Thank you for informing me of this. It is an important matter. I work at a school. I will share this information with my students. They need to know about this.”

Arjun is a tourist from Dubai. He observed practitioners doing the exercises and thought they were doing Tai Chi. He said, “This is the first time I heard of Falun Gong. The principles of Truthfulness, Compassion, Forbearance are absolutely beautiful. The world needs this at the moment especially during troubled times with the pandemic and war.”

“They appear so peaceful and relaxed.” He is interested in learning Falun Dafa and said he would do more research online when he returns home.

Joann Tippett, who lives in San Francisco, heard about Falun Gong for the first time. She took a brochure and plans to read it. She said, “I think it is very important to step out and tell people what Falun Dafa practitioners are doing.”

She was glad to see the activities being held that day as it helped her understand what is Falun Gong. “Practitioners seem so peaceful, everyone should follow the principles of Truthfulness, Compassion, Forbearance. What the world lacks currently is kindness. People’s tolerance levels are very low.”

Ms. Tippett said she heard of the human rights violations in China. “This should not happen. They cannot practice cultivation freely in their country, it is sad. Everyone should have the freedom to choose.”