(Minghui.org) Falun Dafa practitioners held activities in four spots in central London on Saturday April 16, 2022 to commemorate April 25, 1999, when 10,000 practitioners went to Beijing to peacefully appeal for the right to practice.

It was a sunny day in London and the streets were crowded with tourists and residents. Practitioners raised awareness about the ongoing persecution in the busiest spots in London – Leicester Square, St. Martin Square, Chinatown and outside the British Museum from afternoon to evening. Their activities drew a lot of attention from passersby. 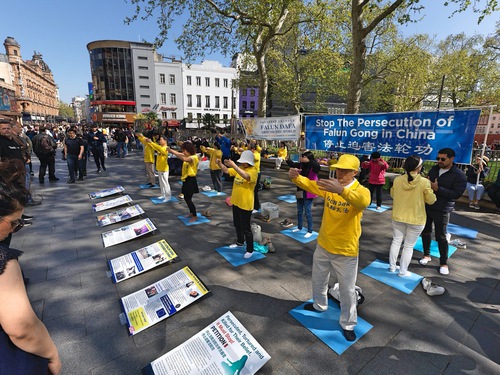 Shraean from India stopped at Leicester Square to read the information. He stood for a long time and watched as practitioners demonstrated the exercises. He snapped photos of every display board with his mobile phone. He told practitioners, “I want to send this information to my friend in India who is a journalist. This persecution is terrible; it is inhumane. I want more people to know what is happening in China.”

Chira lives in London and said she’s seen practitioners in Chinatown for many years. She said: “I think this is a beautiful practice.”

Maria is a tourist from Greece. She signed the petition to show her support for practitioners after she and her relatives read the information and watched the exercise demonstrations. She said, “This is the first time I have heard of Falun Dafa. I read the display boards and don’t know too much about the practice. But I am certain such a traditional faith should not be suppressed. I believe Falun Dafa has profound meaning, and is wise and spiritual. It attracted my attention. I will search for more information on it.”

For many years, practitioners have maintained a site in London’s Chinatown to raise awareness on the ongoing persecution. Erona Namani is a postgraduate student and noticed the practitioners’ activities there. It was the first time she heard about the brutal persecution in China. She said, “It is important to expose this persecution. Such activities are important. It lets the whole world know what it is like to live in China. Chinese citizens need to have more human rights, freedom and equality. I want to share your petition on my social media to help more people know about this.”

Background: What is the April 25th Appeal?

Falun Dafa (also known as Falun Gong) was first taught to the public in 1992. Nearly 100 million people across China were soon practicing after experiencing improvements in their health and morals.

On April 23 & 24, 1999, police officials in Tianjin, a city near Beijing, assaulted and arrested dozens of practitioners who had gathered outside a magazine office to discuss errors in a recently-published article attacking Falun Dafa. As word spread of the arrests and more practitioners inquired with officials, they were told they had to take their appeal to Beijing.

The following day, April 25, some 10,000 Falun Dafa practitioners spontaneously gathered at the Central Appeals office in Beijing, as they had been instructed by Tianjin officials. The gathering was peaceful and orderly. Several Falun Dafa representatives were called in to meet with Chinese Premier, Zhu Rongji, and members of his staff. That evening, practitioners’ concerns were answered. The arrested practitioners in Tianjin were released and everyone went home.

Jiang Zemin, former head of the CCP, perceived the spiritual discipline’s growing popularity as a threat to the CCP’s atheistic ideology and issued an order to ban Falun Dafa on July 20, 1999.

Minghui.org has confirmed the deaths of thousands of Falun Dafa practitioners due to the persecution over the past 22 years; the actual number is suspected to be much higher. More have been imprisoned and tortured for their faith.