(Minghui.org) The COVID-19 pandemic has been raging around the world since it first broke out in late 2019. Despite various measures to battle the disease, new cases continue to grow, even after many people have become fully vaccinated and boosted against the virus. New variants such as Omicron seem to evade vaccine protection and continue to infect people.

This article aims to discuss if alternative solutions are available to curb the pandemic. 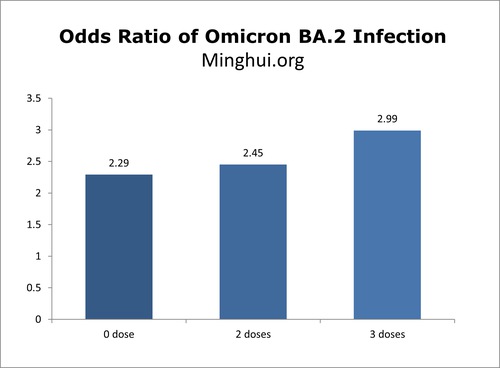 There is a saying that, although COVID-19 vaccines have limited effects on new variants, they do lower the risk of getting seriously ill and reduce the mortality rate. As a result, many governments have expanded vaccination to the elderly and even infants.

The U.S. CDC website says that “Fully Vaccinated Adults 65 and Older Are 94% Less Likely to Be Hospitalised with COVID-19.” But the real situation may not be that simple for a couple of reasons.

First, to avoid bias in clinical trials, a double-blind study is often conducted in which neither the participants nor the researchers know who receives active treatment (such as vaccination) or placebo. With COVID-19, however, most of the data came from hospitalised, infected elderly population and it is difficult to rule out bias.

Secondly, people especially the elderly with certain medical conditions were not suitable for vaccination. In other words, the vaccinated elderly population may be healthier in general than their counterpart. When an unvaccinated elderly individual dies from COVID, it is hard to know if the death results from a pre-existing medical condition, or the lack of vaccine protection. Therefore, besides the double-blind study design, appropriate control groups are needed to produce meaningful results. These groups would include: healthy vaccinated, healthy unvaccinated, unhealthy vaccinated, and unhealthy unvaccinated.

The above data indicate that while two doses seemed to have lowered hospitalisation of study participants, the three-dose regimen was associated with higher hospitalisation rate than the zero or one dose treatment.

“Transmission of SARS-CoV-2 Omicron VOC subvariants BA.1 and BA.2: Evidence from Danish Households,” an article from the University of Copenhagen in January 2022 showed an increased susceptibility of infection with Omicron BA.2 compared to BA.1 sub-lineage. The paper also stated that BA.2 “possesses immune-evasive properties that further reduce the protective effect of vaccination against infection.”

Sweden is one of the few countries that has never imposed a mandatory lockdown. Data shows its population infection rate was lower than countries that imposed strict lockdowns such as Italy, U.K., Spain, Belgium, and others. Furthermore, the COVID-19 cases dropped sharply after the countries removed nearly all pandemic-related restrictions on February 9, from restaurant opening hours to indoor venue attendance limits.

Importance of Being Good

“In any effort to understand what lies ahead, as much as what lies behind, the role of infectious disease cannot properly be left out of consideration,” wrote historian William H. McNeill in Plagues and Peoples. “Infectious disease which antedated the emergence of humankind will last as long as humanity itself, and will surely remain, as it has been hitherto, one of the fundamental parameters and determinants of human history,” he explained.

According to traditional Chinese culture, there is harmony between heaven, earth, and mankind. Moral degeneration would bring natural disaster and plagues. When that happened, people who cherished virtue could be spared.

Siku Quanshu (Complete Library in Four Sections) documented a story of Xu, a magistrate of Gaozhou in the Ming Dynasty. Both his grandmother and stepmother were severely ill, and many other members of the family were also infected. Seeing this situation, their relatives and neighbors all stayed away to avoid infection. But Xu stayed and took care of his grandmother and stepmother. Both of them later recovered and Xu was healthy all along, as if the disease had nothing to do with him.

Mai You Ji, a collection of short stories from the Qing Dynasty, wrote a story of Wang Yuxi. Wang was a scholar and he studied from Chen Junshan. After a plague broke out, Chen’s entire family died and no one dared to come. “How could I let this happen while doing nothing?” Wang said. He then went in and placed all the bodies in coffins. He also found an infant and, with the help of a doctor, rescued the baby. Wang was also all right.

Lucia DeClerck, a 106-year-old woman from New Jersey, survived both the 1918 Spanish flu and COVID-19. When asked how she could live such a long life, DeClerck replied, “I don’t have a secret… All I do is pray, pray, pray. And don’t eat junk food!”

There is a saying that, when God closes a window, he opens a door somewhere else. These stories give us a hint of how to survive difficult times like plagues.

Osnat Gad, a 73-year-old businesswoman from Long Island in New York, also experienced a similar story. In March 2020, she was sick and diagnosed with COVID-19. One of her friends told her about Falun Dafa and shared how its practitioners had benefited from the practice. Following her advice, Gad began to recite “Falun Dafa is good” as well as “Truthfulness-Compassion-Forbearance is good.” She quickly recovered after that.

Zhu Ruigang, a Chinese living in Toronto, was found to be infected with British variant of the Coronavirus (B.1.1.7) on March 15, 2021. With fever and breathing difficulty, he remembered Falun Dafa that he used to practice in mainland China but later stopped doing due to the persecution. After beginning to do the exercises again, he also recovered in a few days.

Another incident occurred with Silke Wagner, a security inspector at Munich Airport in Germany. After being diagnosed with the Delta variant of coronavirus in November 2021, she had a fever of 41°C and was helpless like an infant. Her husband, who had practiced Falun Dafa for over 10 years, recommended her to recite the words of “Falun Dafa is good” and “Truthfulness-Compassion-Forbearance is good.” Through reciting these phrases and doing Falun Dafa exercises, Wagner soon regained health.

These are just a few examples of how kindness and having faith in it could bring blessings. In a world of uncertainties, keeping this in our mind will lead us to health and safety.