(Minghui.org) Falun Dafa offers a multitude of benefits to both those who practice it and those who have supported it over the 23-year-long harsh persecution in China.

Here is a collection of greetings from family members of practitioners. Impressed by the physical and moral improvement of the practitioners in their families, they have also witnessed miracles themselves. Now they are grateful to Mr. Li Hongzhi, the founder of Falun Dafa, and wish him a Happy Chinese New Year. 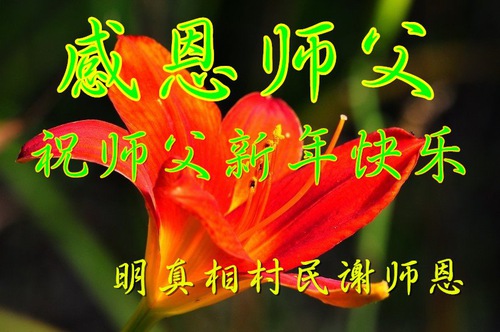 One man from Wu County, Heilongjiang Province, said he had a stroke and it led to half-paralysis. “While I was in a coma, my wife stayed with me all the time. Having practiced Falun Dafa for many years, she had faith in the practice. She kept reminding me to recite ‘Falun Dafa is good, Truthfulness-Compassion-Forbearance is good, and she also did so herself,” wrote the man.

Gradually, he regained consciousness. His wife then brought him an MP3 player with audio lectures of Mr. Li Hongzhi, founder of Falun Dafa. While listening to the lectures, he recovered quickly and doctors were surprised the recovery went so well.

“Right now I am all fine, and no one could see I was half-paralysed and in a critical condition,” the greetings continued, “I owe all these to Falun Dafa and words cannot describe how grateful I am. Thank you, Master Li. I sincerely wish you a Happy Chinese New Year!” 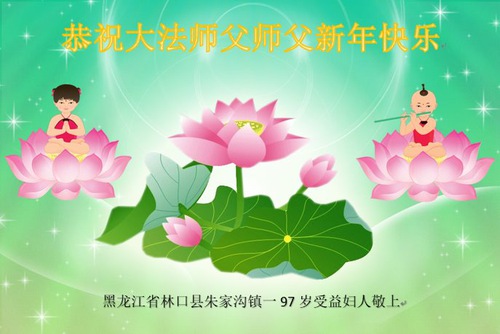 The Secret of My Family Happiness

Lei (pseudonym) from Jiangbei District in Chongqing said his mother began to practice Falun Dafa in 1996. At that time, she suffered from numerous illnesses and doctors could not help with them. To make things worse, with Lei’s father out of a job, the family could hardly afford their medical expenses. Although only 9, Wei often traveled with her mother to visit doctors and no one knew how long such a miserable life would last.

All this changed after his mother started to practice Falun Dafa. Not only did her health improve, but she also became more positive. Right now, she does well at work and can handle all the household chores. Lei has graduated from college and found an ideal job.

“Although my family was also affected by the suppression these years, my mother is always clear about what Falun Dafa is and has remained determined,” Lei explained. “After having been through these ups and downs in life, Father and I also cherish what Dafa has given to us. We want to thank Falun Dafa and are proud that Mother is a Dafa practitioner.” 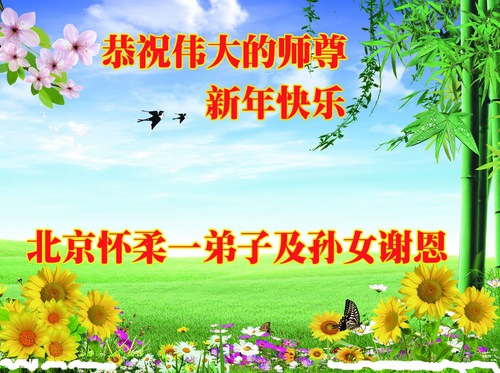 Street Vendor in Beijing: My Only Hope

Mei is a street vendor in Beijing and she had worked long hours to make ends meet for the family. With her meager earnings, she had to rent an apartment, rent a booth, pay for children’s education, and make a living for a family of four.

Luckily, she overheard Falun Dafa from a customer one day. “The words of ‘Truthfulness-Compassion-Forbearance’ shed a light in my world of darkness, making me realise there are still good people and hope in this society,” she recalled, “As I tried to say positive words of Dafa while keeping in mind phrases ‘Falun Dafa is good, Truthfulness-Compassion-Forbearance is good’, I had more and more customers.”

It was especially this case after the pandemic broke out in early 2020. “There were hardly any people in the market and some vendors went out of business. But my booth still did well and I know all this is because of Falun Dafa,” she wrote.

Growing up in the countryside with limited education, Mei does not write well to express her gratitude. “But I do know Master is so good bringing Falun Dafa to us. You are our only hope and I want to thank you for everything,” concluded the greetings. 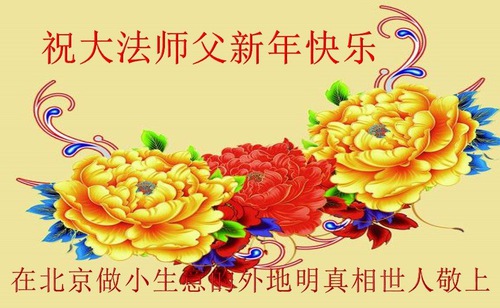 Bin from the Changping District in Beijing started to practice in 1998. His mother, already 87, fractured her leg and lower back in three places last year. “Fortunately, she was able to recover quickly after each incident by listening to Master’s audio lectures and reciting the phrases ‘Falun Dafa is good, ‘Truthfulness-Compassion-Forbearance is good’,” wrote Bin.

One example was the second bone she fractured. She had surgery and two plates held her leg together. “But shortly after leaving the hospital, she was able to walk up and down the stairs herself by holding onto the rail,” Bin continued. “The doctors cannot explain this and we can only call it a miracle!” 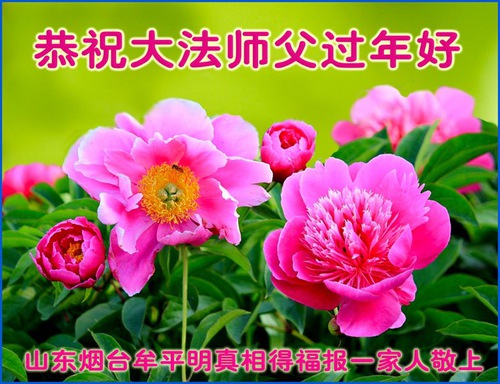 Fen lives in Hunan Province and she sent over greetings on behalf of 26 people in her family. Among them, Xiu’s mother, elder brother, and sister-in-law are Falun Dafa practitioners. Her three younger brothers have also read Dafa books. “But all of us know Falun Dafa is upright and it is a sin for the Chinese Communist Party (CCP) to suppress it. So all of us have quit the CCP organisations,” she wrote.

Everyone has his or her story on the benefits received from Dafa, Fen added. One example is Jing, wife of Jen’s second younger brother, was found to have a polyp in her breast in 2018. When visiting her in the hospital after a surgery, Fen brought Jing Falun Dafa materials along with some paper money as a gift. “Keep reciting the words written on the banknotes (‘Falun Dafa is good’ and ‘Truthfulness-Compassion-Forbearance’ printed by practitioners), and you will recover quicker,” Fen suggested.

Three days later, Fen called her brother asking about Jing. She was told Jing had been glad to spend the money in the hospital for snacks while helping people learn the facts of Falun Dafa. “The doctor was here a few minutes ago. The re-examination result just came out – the tumor is gone!” exclaimed the brother. Fen was really happy for Jing, who was always a supporter of Falun Dafa. When Fen contacted her in the past about a petition to support filing a criminal complaint against the former CCP leader for persecuting Falun Dafa, she signed it without hesitation.

Fen’s youngest brother Yong is a manager at his workplace. He often said good things about Falun Dafa. Once upon hearing a higher official slandering Falun Dafa in a meeting, Yong replied, “Falun Dafa is good – I know it well. So tens of millions of people have become better citizens because of it, right?”

Yong’s uprightness was also rewarded. One day when he was out walking, a speeding motorcycle ran into him and knocked him down. “I only had a minor scratch on my forehead – it was unbelievable!” he said, “I know it was a blessing from Master Li.”

Fen said she has practiced Falun Dafa for 26 years, since 1996, and there are too many stories to share with Minghui on how extraordinary Dafa is. “Thank you, Master Li. We all wish you a Happy Chinese New Year!” she wrote. 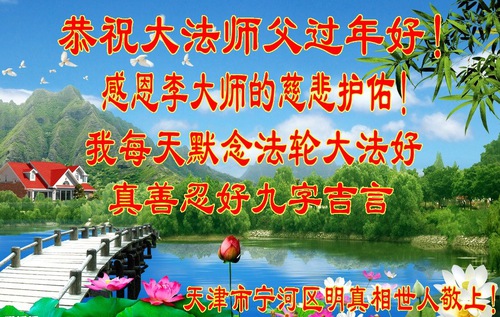