“Truthfulness-Compassion-Forbearance, what a great ideology this is!” one woman exclaimed after reading the information practitioners distributed.

Falun Dafa practitioners in Franconia held activities in front of St. Lorenz church in Nuremburg’s city centre on August 28, 2021. They demonstrated the exercises, distributed information about Falun Dafa and collected signatures on a petition to call for an end to the persecution in China.

There are many shops in the area and a constant flow of people passed by. The soothing music and relaxing exercises demonstrated exuded calm and serenity, drawing the attention of many people. They stopped to read the information and sign the petition.

Some walked straight up to the table after reading the information on the banners about the petition to end the brutalities and stop forced organ harvesting by the Chinese Communist Party (CCP). Passersby who had not heard of Falun Dafa before talked with practitioners and asked why the practice is brutally suppressed in China. After learning the facts, they signed the petition.

Several local residents asked practitioners about practice sites in Nuremburg and said they wanted to learn the exercises. 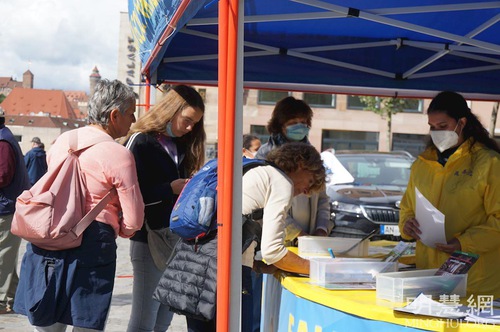 The CCP Regime Is Evil

A middle-aged man from Iran who has lived in Germany for many years told practitioners after signing the petition, “You are very peaceful. I hope my signature can help you. I hope more people can step up to end the CCP and this persecution. The CCP is an evil regime. Like other dictatorships, it should not continue to exist and harm people. You are good people. I will pray for you when I return home. I will also tell my daughter who is attending high school, as well as friends and family members about Falun Dafa.”

A German woman in her 80s said, “My mother once told me to be wary of the CCP. I live in Germany so I don’t know anything about communist ideology. I never quite understood my mother’s words. Today I understand what she said. Forced organ harvesting is beyond the moral bottom line of humanity. I hope our government can be just, and not be swept away by economic gains and bow to the Communist regime.”

After signing the petition to stop the atrocities, she wished practitioners all the best.

Another German woman thoroughly read the brochure that the practitioners were distributing. She said, “Truthfulness, Compassion, Forbearance, this is a great ideology! This is what this chaotic world needs the most. Look at how things have become in this world. If Falun Dafa is taught everywhere in the world, it will become a better place.”