May 13, 2021, was the 22nd World Falun Dafa Day and the 29th anniversary of Falun Dafa’s public introduction. Two thousand practitioners held a grand parade to celebrate the event and wish the founder of the spiritual practice Mr. Li Hongzhi a Happy Birthday. They also reflected on the positive impact Falun Dafa has had on their lives.

It was a warm spring day as 2,000 practitioners headed off at 11 a.m. from the square across from the United Nations on Second Avenue. The parade wound its way down 42 nd Street and ended at the Chinese Consulate on 12th Avenue.

The parade was divided into three large sections. The first section featured the practice of Falun Dafa itself. It was led by an exercise-demonstration team of nearly 100 participants, followed by a large “Celebrating World Falun Dafa Day” banner, a model of the book Zhuan Falun in different languages, the Falun emblem, and colorful banners reflecting the beauty of Dafa.

Since its public introduction 29 years ago, Falun Dafa is now practiced in over 100 countries worldwide. Zhuan Falun has been translated into more than 40 languages. Falun Dafa receives hundreds of acknowledgments from dignitaries and politicians all over the world every year.

The second section focused on the CCP (Chinese Communist Party) persecution of the spiritual practice that began in July 1999 and called for it to end. Large banners relayed information about the persecution, such as illegal detention, torture, killing, and state-sanctioned organ harvesting from living practitioners, and demanded that former CCP head Jiang Zemin be brought to justice.

The third section recognised the 370 million Chinese who have quit their memberships in the CCP organisations. Since the Nine Commentaries on the Communist Party was published at the end of 2004, the CCP’s true nature has been exposed, and millions of people who want to have a bright future have renounced it.

Practitioners in the third section carried banners that read: “Support the 370 Million People Who Withdrew from the CCP,” “Patriotism Does Not Mean Loving the CCP,” “The CCP Is Not China,” “Only Without the CCP Can China Have a Future,” and “The CCP Is the Real Virus.” 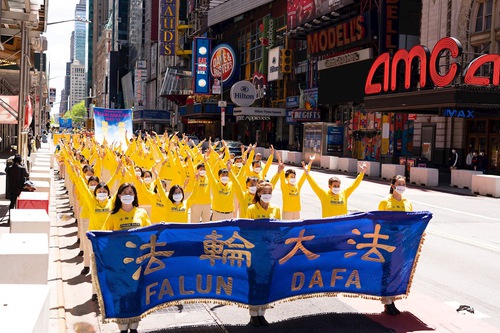 Nicole Fenny is 26 years old and started practicing Falun Dafa last year. She is from Long Island, New York, and this was her first time to participate in a Falun Dafa Day parade. She was excited and appreciated Dafa from the bottom of her heart. She says Dafa saved her.

“I am a salesperson for a headhunting company. On the surface, my life looks very good. I travel to many places and have many friends,” Nicole said. “But last year, I was in a very dark moment in my life.”

Nicole said that for a long time, there seemed to be a powerful fear that controlled her. She could not relax or fall asleep. She thought negatively about everything. The only way she could avoid that fear and anxiety was to keep busy, go to parties, smoke, drink, or take drugs.

She could not even sit quietly. The coronavirus pandemic last year prevented her from going out and doing what she usually did to distract herself. She decided to find other ways to overcome this fear and remembered that a friend told her about a mind and body spiritual practice.

She said, “I was in the kitchen. I opened the book and learned to do the first exercise. As soon as I stretched my arms out, I suddenly felt a wave of powerful energy penetrate my body. At that moment, I thought, ‘I am safe!’ I immediately felt I was saved and that I was safe. I said from my heart, ‘I must do this practice!’”

After Nicole made up her mind to practice, she learned that the powerful practice was called Falun Dafa and its founder is Mr. Li Hongzhi. Then, like many practitioners, Nicole experienced something. She immediately quit smoking, alcohol, and drugs, and all the nightmares and scary thoughts that had plagued her disappeared. She said that she immediately “advanced at full speed” on the path of cultivation, removing all bad thoughts without any hesitation.

“My gratitude to Master cannot be expressed in words, because Master has given me so much!” Nicole pressed her palms together in front of her chest in a gesture of respect and said, “Thank you, Master, for giving me guidance and letting me be a good person.”

She was excited to participate in the parade and said she hopes passersby and residents learn about Truthfulness-Compassion-Forbearance.

Misled by the CCP’s Lies, Finally Learning the Truth

Jiping Geng was in the second section of the parade that focused on the CCP’s persecution. She said that May 13 th is especially significant for her as she started practicing Falun Dafa on May 13th three years ago.

Ms. Geng used to be a middle school politics teacher in China. Like many Chinese, she was deceived by the CCP’s lies and slandered Dafa. After she learned the truth and withdrew from the Party, she was blessed. She found her direction in life and was no longer anxious or depressed.

Ms. Geng said, “Now when I look back and remember how I behaved, I feel bad. I was deceived by the evil Party and said bad things about Dafa. I am indignant that the Party lied and deceived me. I feel bad for those who are still deceived by the CCP.”

She participated in the parade, holding a banner with messages protesting the persecution. She said, “Because I was deceived, I know the truth is precious. I am grateful to Master for his compassion and salvation. I thank Master for still giving me this opportunity—because I was deceived, I want to use every opportunity to expose the persecution and awaken those Chinese people who are still deceived.”

She wished that Chinese people would think for themselves: “As long as you stand on the side of righteousness and kindness, you will be fine.”

He said he was deeply moved to see more than 2,000 practitioners dressed in bright yellow, marching proudly, promoting Truthfulness-Compassion-Forbearance, and displaying “Falun Dafa Is Good” banners in New York.

On May 13, World Falun Dafa Day and Master Li’s birthday, Mr. Wu said, “I wish Master Li health and hope that he continues to spread Falun Dafa. I hope that practitioners tell more people the truth so everyone can enjoy freedom of belief.”

Mr. Liu, who recently moved to the U.S., said that the practitioners’ parade exposed the CCP’s evil and inhuman nature. He commended their huge contribution to the world.

Mr. Tang, who participated in the parade, said he learned the truth by comparing the CCP’s lies and his own study of Falun Dafa. He joined the parade and said practitioners’ exposure of the CCP’s lies has greatly impacted Chinese people and the whole world.

Yang Shisong, a member of the Rock Church, said, “Falun Gong is the largest religious belief group being persecuted in the world today. It is also a victim of communism and the CCP. The CCP is an evil, worldwide organization and an evil sect!”

He said, “The Chinese Communist Party must be destroyed and must be purged from human civilisation. This is the future of human history.”

New York City on May 13 was warm and sunny. The city had reopened after a lift in restrictions that had been in place for more than a year due to the pandemic.

When people saw the colorful procession of peaceful Falun Gong practitioners, they looked excited and delighted. Some of them said that they felt powerful energy; some said that the more they watched the parade, the happier they were; while others praised the universal values of Truthfulness, Compassion, and Forbearance.

New Yorker Blanca said, “I like this peaceful parade. I feel powerful energy. I was amazed. This is what we need.” She said it was the best thing she’d seen all year.

Brendan Page admired practitioners’ courage and sacrifice and said, “Falun Dafa is so good. Which government does not allow people to follow Truthfulness-Compassion-Forbearance? Communism oppresses people. These people are courageous.”

Three friends watched the parade together. Ramzi from Brooklyn said the parade made him feel peaceful and safe. He wants to learn Falun Dafa and said, “When I see these people, my heart feels at peace and I am happy.”

Michelle Hope recorded a video of the parade. She said she would post it on her social media and share the event. She was excited and moved to tears, and kept saying, “Beautiful. Truly beautiful!”