A petition with more than 70,000 signatures was presented to David Shoebridge and Jamie Parker, Members of the Parliament for the State of New South Wales (NSW) at at press conference in front of the state Parliament building on April 24, 2013.

The petition seeks an end to the illicit harvesting of organs from living Falun Gong practitioners by asking the NSW Parliament to amend an existing law. The result would be to restrict NSW citizens and residents from obtaining organs harvested from unwilling victims, to prohibit the training of doctors engaged in illegal organ trafficking, and to penalize those who receive organs through illegal means.

The press conference was held to raise awareness of the organ harvesting atrocities happening in China. More than 100 Falun Gong practitioners were also in attendance. 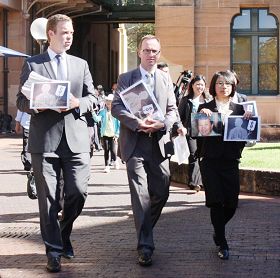 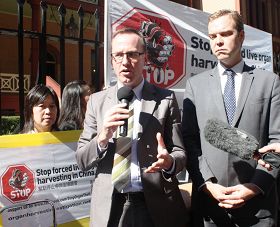 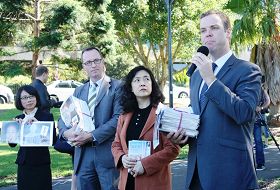 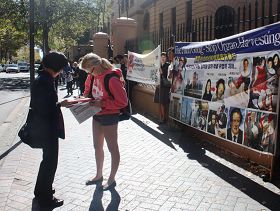 Few petitions have as much support as this

MP David Shoebridge of NSW said at the press conference, “We received the extraordinary petition from more than 70,000 people across New South Wales, across Australia. The number of people signing on this petition presented today is more than three times as many people as signed all the petitions presented to the NSW Upper House in 2012, and in fact will be the largest petition presented in the lifetime of the Parliament since 2011.

“Ordinary people who have responded to this petition call for the New South Wales government to take some action, to do its part in stopping the crime of forced organ harvesting, whether that happens in New South Wales, Australia, or across the planet.

“We do know that countries in our region are engaged in the practice of forced and criminal organ harvesting. The Chinese government itself acknowledges that it engages in the practice of taking the organs from executed prisoners and using those organs for sale in a very sophisticated, and for elements of the Chinese military and medical establishments, very lucrative process, where they sell those organs to foreigners and also to local wealthy citizens.”

MP Shoebridge continued, “Now we know from detailed investigations from the likes of David Matas and David Kilgour that a good proportion of the organs that are used by the Chinese government come from prisoners of conscience, and that include in large part practitioners of Falun Gong. We live in a society in Australia that respects the right of people to have freedom of religion, to exercise their beliefs, particularly when their beliefs are based upon respect, and are based upon a sense of spiritualism that does not impact or hurt others.

“And when we see, as a state government, or as a federal government, the rights of practitioners, whether it is Falun Gong, followers of Christianity, followers of any religion, are being persecuted simply for their beliefs, and worse than that, are being exposed to have their organs forcibly taken from them, through a corrupted organ harvesting regime such as what we have seen in China, we have an obligation to act.

“No one from this country, no one from this state, should be allowed to travel overseas, to repair themselves, at the expense of the death of prisoners of conscience, or a person in poor financial circumstances anywhere around the globe. As medical expertise advances, as our medical skills of transplantation become more sophisticated and over time more commonplace, the demand for unethically obtained organs will grow and grow. So we need to act and ask our government to stop it. There is a draft legislation in the New South Wales Parliament that could pass this year to do its part to stop it, to make it a crime to travel anywhere around the globe to accept an unethically obtained organ. That is what this petition is calling for the government to do. We can only hope that this extraordinarily strong level of support will go a long way to get a kind of cross party support we need to make this act a law.

“So congratulations to all of you, for the work you have done in talking to ordinary people across the country and getting them to support the petition. We’ve still got a way to go, but this is a major step forward.”

Accepting organs from forced harvesting is against Australian values

MP Jamie Parker of NSW said in his address, “I am here to receive this petition, this incredible petition. Over 70,000 citizens here in New South Wales have signed this petition. And you remember, earlier this year, over 10,000 people signed a similar petition, for the New South Wales government to stop the opportunities for Australians to go overseas to get organs. In particular, organs as we know from countries like China, which come from prisoners of conscience, which are forcibly removed, which has no place in the values represented here in Australia, and no place for Australian citizens to be going to receive those organs.”

“We see here that more than 70,000 people have told this government that they need to act. The petition of over 70,000 names is absolutely an enormous effort. It is an effort that demonstrates the support for this issue in the community. And it is an effort that demonstrates that we ordinary people, we ordinary people hear about this issue and have it explained to them, and they are deeply horrified that this could take place. So I commit myself to work inside the Parliament and outside the Parliament to continue to push this issue, and I would like to take this opportunity to conclude and congratulate every person for their continued campaign year after year, week after week, day after day, collecting the petitions. So, thank you.”

Following the formal addresses, Mr. Shoebridge and Mr. Parker asked practitioners to help carry the petition to the rear garden of the NSW Parliament, where they once again stated their appreciation of the effort of practitioners over the past several months.

Mr. Shoebridge said, “Tomorrow is the 14th anniversary of the April 25 appeal. And that protest on the 25th of April 1999 was a quiet protest, it was a respectful protest but it was a strong message when practitioners of Falun Gong said to the government of China, ‘Respect our rights and respect our belief.’

“And 14 years ago tomorrow marks the start of that brutal crackdown, the police violence, the detentions, the ongoing detention in labor camps of Falun Gong practitioners simply for studying your belief, and that is why it is essential that in a free country like Australia you come together, you use those open spaces and use your rights to protest. And you mark the day here.

“So I want to make this clear to you as this petition makes clear to you. You’ve got thousands of friends and thousands of supporters who support your fundamental rights. You have the right to your beliefs and to respect your beliefs and to gather in a public place to speak up for your rights. You have it here in Australia and we are demanding that you have it as well in China.

Mr. Parker said, “I first heard of the issue of Falun Gong in China, when I was on Tiananmen square. And I saw practitioners peacefully protesting, protesting and being beaten very severely by government officers, police and military personnel. So I know very clearly about the crackdown on Falun gong practitioners in China.

“As a member of this Parliament I want to emphasize how important it is. I want to congratulate each one of you for the effort you have put in to getting these signatures. It is a very powerful statement that will make a very significant difference. So I think that we should give a round of applause for all of those people that have helped with the petition: Thank you!

A local television station, ABC TV covered the whole event. Falun Gong practitioner Zeng (Jennifer) Zheng, who endured brutal persecution in China, said in an interview, “I experienced a thorough physical examination twice. At that time we were tortured miserably every day to the verge of death. We did not think about this issue, why the prison would spend money to conduct physical examinations for us while torturing us brutally. I recalled that when I was imprisoned in China, a prison guard intimidated us, ‘If you don’t give up your belief, I will send you to that place. You will never be able to come back.’ The place he referred was Xinjiang. Later I read a report from Agence France-Presse stating that there was a concentration camp detaining 50,000 people. A Western author (Ethan Gutmann) who wrote Losing the New China, mentioned that the earliest live harvesting was in Xinjiang. A doctor in England participated in the process.”

Ms. Zeng continued, “I asked a doctor in Australia about how long it is to wait for a liver for transplantation and he said on average it’s 11.5 years. In China, a liver can be obtained in a few weeks; how is this possible? The only possibility is that there are lots of living humans to be used for this purpose. The physical examination of Falun Gong practitioners is an important step. Then our data is stored and once an organ is needed, the database will be searched. It is killing on demand. This is the conclusion that a medical expert made. The only possibility is that a suitable donor can be found within so short time from hundreds of thousand of imprisoned people.”

Another Falun Gong practitioner, Lisa, was interviewed by ABC TV during the press conference. Her mother, Zhang Fengying, is currently imprisoned in Tiantanghe Women’s Forced Labor Camp in Beijing for practicing Falun Gong. Lisa called for help to rescue her mother who faces the danger of losing her life to forced organ harvesting.

Ms. Zhao of the Australia Falun Dafa Association said at the end of the press conference, “We have been paying close attention to China’s live organ harvesting from Falun Gong practitioners. We have collected more than 72,000 signatures on a petition to demand a stop to the live organ harvesting, and handed the petition to the Australian government through two NSW Members of Parliament, David Shoebridge and Jamie Parker. The NSW MPs have proposed an amendment to a law to make participation in organ trafficking and live organ harvesting a crime. The bill is under discussion. We submit the signatures to support the bill and to let the Australian people know that going to China for organ transplantation could result in the killing of an innocent person.”