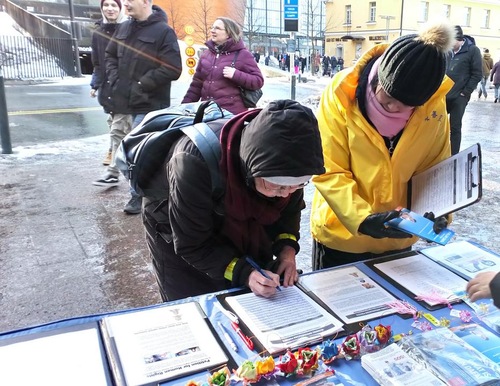 Falun Gong practitioners in Finland held activities in Kamppi, Helsinki on Saturday, February 23, 2019 to raise awareness about the persecution of the practice in China.

When film producer Johanna learned about the brutality of the persecution and the CCP’s crime of harvesting organs from living practitioners, she said, “It’s so wrong to take innocent people’s lives this way!” She signed the petition.

Mikaela told a practitioner that she knew about the persecution of Falun Gong. She and her daughter signed the petition. Mikaela said, “I fully support you!”

A Chinese woman and her young daughter stopped to learn more. A practitioner explained, “We are Falun Gong practitioners and we’re here to tell people what Falun Gong is and how the Communist Party has been been persecuting the practice.”

The woman said she had heard the Party’s propaganda when she was in China, including the Self Immolation Hoax. The practitioner explained that the propaganda stunt was meant to vilify Falun Gong and justify the regime’s unjust persecution. She told the woman how Falun Gong had grown to nearly 100 million people in China, which is more than official communist party membership, and this is what had led the regime to ban and persecute the peaceful group.

The woman said, “Now I finally know the truth!” She decided to quit all the Communist organisations she had joined.

The woman’s daughter admired the paper lotus flowers, so the practitioner gave her one and taught her to read “Truthfulness-Compassion-Forbearance” in Chinese.

Her mother said, “Yes, you will be good girl if you follow these principles.”