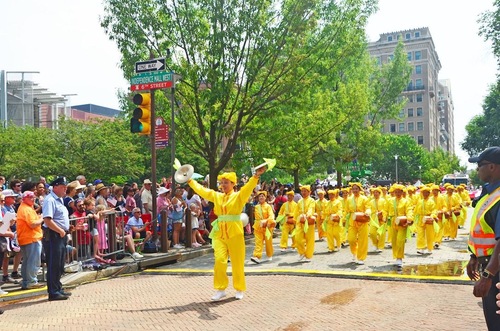 As the birthplace of the Declaration of Independence and the first capital of the United States, Philadelphia’s annual Independence Day celebration is grand and lasts for a week.

The Falun Gong group’s waist drum team was invited to perform in the Philadelphia Independence Day parade on July 4, 2018, making this their 18th year of participation.

Taking off from Independence Hall in Philadelphia, over one hundred groups made up the parade, including dozens of local groups and colorful floats, as well as bands and groups from seven different states. Various ethnic groups showcased their unique cultures and traditions.

Despite sweltering heat, the parade route was crowded with people enjoying the procession and happily waving the national flag.

The spirited performance of the Falun Gong waist drum team delighted spectators. “I can’t stop shedding tears when I see them play,” said Cindy, 76-year-old woman, sitting in a wheelchair with her family.

“On such a hot day, they are so pure and pristine,” Cindy’s son-in-law Todd said loudly, “I think this group should lead the parade.”

A young married couple, Heather and Hugh, moved from Texas to Philadelphia six months ago, and this was their first time attending this event. Heather was impressed with the Falun Gong group and said, “The sound of the music is going straight into my heart, as if I used to be one of the band members.”

Hugh had a similar feeling, saying, “I don’t know why, but I am moved beyond words.” 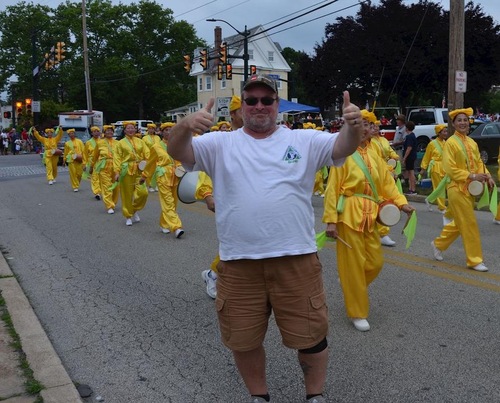 A spectator gives thumbs up to the Falun Gong waist drum team. 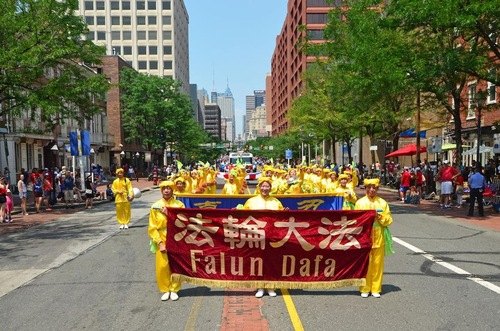 Falun Gong was first taught to the public in 1992. Nearly 100 million people across China were soon practicing Falun Gong after experiencing improvements in their health and character.

Minghui.org has confirmed the deaths of over 4,000 Falun Gong practitioners in the persecution over the past 19 years; the actual number is suspected to be much higher. More have been imprisoned and tortured for their faith.

Evidence shows that the CCP harvests organs from detained practitioners, who are killed in the process, to supply the organ transplantation industry.

Under Jiang’s personal direction, the CCP established the 610 Office, an extralegal security organization with the power to override the police and judicial systems and whose sole function is to carry out the persecution of Falun Gong.