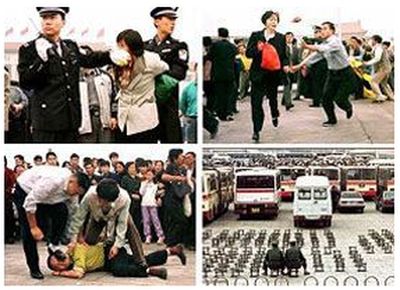 According to inside information, the General Office of the Communist Party of China has recently issued a classified document to local government offices at various levels, giving orders on how to “handle” the Falun Gong “situation.”

The document states that the government will gradually relax the pressure on Falun Gong practitioners, and relieve the constraints on Falun Gong. However, the procedure of “relieving” given in the document indicates that “renouncing Falun Gong” is still the pre-condition for a practitioner to be “relieved.”

On August 30, the Political and Legal Affairs Commission of a city in China called a meeting, requesting all state-run enterprises in the city that employ Falun Gong practitioners to send a representative to the meeting. The reason for the meeting was to announce this document. The document is classified, but government leaders above the town level have had access to it.

A government official commented on this document: “It shows that the suppression [of Falun Gong] has run into a dilemma. It faces tremendous hurdles if it is to go on. But the government does not want to completely restore Falun Gong’s reputation, for it would be a slap in their own face. Thus, they are trying to find a plausible way to ease the constraints on practitioners. However, even this ‘redress’ is not thorough. It still forces practitioners to renounce Falun Gong, and the pressure on them will not be lessened if they refuse to do so.”

Jiang Zemin, the former communist head who launched and directed the persecution, and his followers are experiencing serious pressure of their own now, as many of them have already been arrested on charges of corruption, and some are being investigated. One of the meeting attendees said, “Since Jiang and his gang are in this situation, nobody, even members of the Political and Legal Committee, knows how to carry out the policy in the document. We have to wait for further notice from the authorities.”

Falun Gong practitioners believe that the document shows that the suppression has reached a dead end. But Jiang’s gang does not want to admit failure, and they have issued this document to test the atmosphere. The so-called “relieving” the pressure on practitioners is actually an attempt to relieve the pressure on the Communist Party itself. Yet, the nature of the Communist Party is so ingrained that the Party will never change its innate character, which is against humanity, against society, and is the antithesis of Falun Gong’s principles of Truthfulness-Compassion-Forbearance.

The Communist Party’s persecution of Falun Gong was fated for failure from the very beginning. Nothing can change this fact. Falun Gong practitioners, on the other hand, who have taken the moral high road in the face of relentless persecution, are gaining the respect of the world.