Skip to content
Sept. 29, 2022 | By Falun Dafa practitioners in Russia

(Minghui.org) Falun Dafa practitioners in Russia held a conference to discuss their cultivation experiences on September 17, 2022. Fifteen practitioners from different cities spoke about how they had progressed in their cultivation by telling people about the persecution in China and participating in other truth clarification activities. 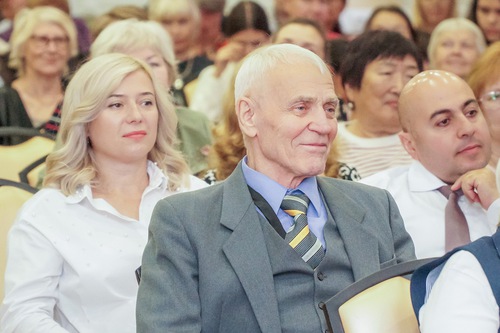 Cultivating Oneself While Organising a Chinese Waist Drum Team

Mikhail Yeremin from Moscow learned how to play Chinese waist drums from a Chinese practitioner in 2003. He traveled to Irkutsk and Krasnoyarsk to teach practitioners there how to play. He thought that playing the waist drums in parades and other local events was a great way to show the demeanor of practitioners.

The effort also offered him many cultivation opportunities. “A few years ago, we waist drummers marched in the parade during activities in Filevskiy Park. I thought I was remarkable and was proud of myself because I’d taught the others how to play the drums so well. After the parade, we had to take off our drums and quickly go on stage to demonstrate the exercises. I tripped and fell while rushing to the stage. I stretched out my right arm to lessen the impact of the fall and dislocated my shoulder. It really hurt and I couldn’t join in the exercise demonstration,” he said.

“I reflected on why this happened and recalled how highly I thought of myself for teaching practitioners to play the drums. That was why it happened. After I realised I was wrong, a miracle happened. My dislocated shoulder returned to its correct position. I sincerely thanked Master for everything he has done for me. At the same time, I asked for fellow practitioners’ forgiveness in my heart. When our group marched on the streets again, my arm still hurt a lot but it was tolerable.”

Sasha from Irkutsk said in her speech, “Since the end of last winter, I started to slack off in cultivation and got hooked on reading romantic novels and watching movies. I gradually stopped going out to clarify the truth. Even if I went out, I did it reluctantly. At the same time, I was caught in a severe tribulation. Afterwards, I began to reflect on my shortcomings. I discovered jealousy, lust, and the desire to show off. I always wanted to compete with others.

“After participating in a truth clarification activity, I began to read novels again. I found it hard to control myself. I kept thinking, ‘I’ll just finish reading this book and then I won’t read any more novels.’ Later, I picked up another book and began reading it. I did not try to get rid of my omission in cultivation. I often got angry.”

She knew she had to clarify the truth and save people. She and her mother, a practitioner, went to New Siberia city to explain the facts about the persecution to local law enforcement authorities. Sasha knew it was an opportunity to cultivate herself.

She said, “The day before we left, a practitioner gave me a stack of documents to print out. In addition to my truth clarification letter, there were around 40 pages in total. We planned to visit the Federal Security Bureau, the Domestic Affairs Ministry, the Siberian Federal District Attorney General’s office, the local district prosecutor’s office and the Human Rights Supervision office. Printing the documents was a test of my xinxing. Nearly all of them had to be printed in color, and I had to keep adding ink. The printer constantly printed additional lines or would not print a certain color. I tried to remain calm and send righteous thoughts. I talked to the printer and kept encouraging it to keep going. It took five hours to get all the paperwork ready.”

Sasha also spoke of her experiences while clarifying the truth to law enforcement departments. Some were receptive while others did not care about what was happening in China. She felt hurt and upset. Remembering other practitioners’ sharings when they did this gave her the strength to continue to spread the truth.

She said, “I went to a wholesale market that weekend to hand out materials to Chinese vendors. I encountered a xinxing test there as well.

“One woman said very loudly that she did not want what I has handing her. I tried to explain but she would not listen. I then walked over to another woman but the first woman grabbed the newspaper I gave her and handed it back to me. Nearby, another woman began to criticise the information loudly. I walked up to her and said the Chinese Communist Party has nothing to do with Chinese people. She calmed down a little. I walked to the last shop but hardly anyone took my information. When I realised what I did was wrong, I stood quietly for a moment, calmed down, then walked back. People then started to take my materials.”

Svetlana from Moscow talked about how she progressed in cultivation while organising activities to celebrate this year’s World Falun Dafa Day.

She said, “All public gatherings and activities were banned after the COVID pandemic broke out in 2019. When a group of us went to apply for permission to hold activities in April 2022, some parks replied that they were still not able to allow activities. Yet some places told us there were many events in May and the venue was fully booked. When I sent a letter to a department, they went through my application and passed it to the management office of 11 parks. One of them invited us to hold World Falun Dafa Day celebratory activities. We received approval a week before the celebrations and quickly made preparations.”

Svetlana said she tried her best to eliminate her anxiety in the process and her tendency to not trust other practitioners. On the other hand, she realised she should not rely on others too much. She also discovered she had resentment. She learned to calmly accept criticism and got rid of human thoughts as well as notions.

“A few days before the event, we received a phone call from an officer in the security department asking if we were going ahead with our activities, and if so, where we planned to hold them. A practitioner chatted with them, and after discussing with another practitioner, we decided to let them know the details. Consequently, officers from the security department came to observe us as well as the public while we held World Falun Dafa Day celebrations. At the end of the event, they told us they loved everything and felt a strong energy field.”

Larissa Podjacheva from Pyatigorsk did the exercises in a park with other practitioners every Sunday and distributed information about Falun Dafa. She often chatted with people, “I felt hurt when some refused to take my flier or made negative comments. I began to examine my thoughts. Why did these things bother me? When I was a child, I was afraid of being laughed at. If I want to argue and defend myself when they say I am a member of a certain group, it means I don’t have enough faith in Master and Dafa.

“I also realised that I didn’t have enough compassion to clarify the truth to these people. I kept repeating ‘Falun Dafa is good, Truthfulness-Compassion-Forbearance is good!’ When I greeted people with a smile and watched them leave with compassion in my heart, even if they did not take my flier, I told them these sacred words.

“The situation has changed, and I no longer hear negative remarks. People now take the materials and ask about Falun Dafa. It is not possible for me to clarify the truth about the persecution to everyone, but if you sincerely hand them information, they will surely read it and make the right decision.”

Practitioners did the exercises together in the park on the mornings of September 17 and 18. They also distributed information about Falun Dafa. As they left the venue after the conference, they saw a beautiful rainbow in the sky. 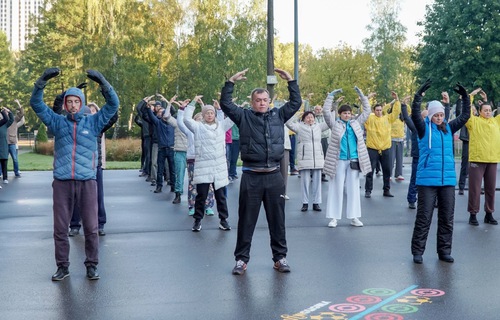 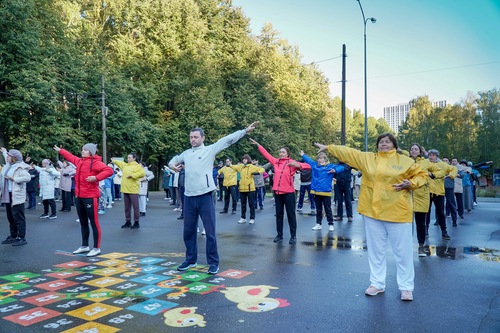 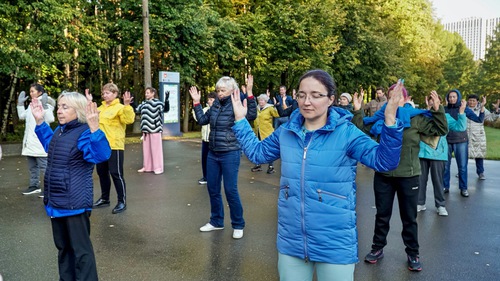 Views expressed in this article represent the author’s own opinions or understandings.