(Minghui.org) A practitioner held more than 40 introductory Falun Dafa classes in 17 places in the remote state of Tripura from late April to early July this year. The visits included a university and a temple in addition to 15 schools. Ten locations were outside the capital, Agartala.

Tripura, one of the smallest states in India, is a hilly state in the northeast of the country bordered on the north, south, and west by Bangladesh and the Indian states of Assam and Mizoram to the east. It is home to a diverse mix of tribal cultures and religious groups.

Tripura is geographically isolated, and initially only one major highway connected it with the rest of the country. Eventually a railway line and an airport were built. Frequent heavy rains and landslides cut the state off. Bengalis represent the vast majority of the Tripuri population. People speak mostly Bengali but also English, Kokborok (Tripuri), and other regional languages.

As in previous years, the practitioner had to carefully decide which materials to take and how to pack them. It was very challenging, as it was unusually hot.

The practitioner boarded the train on April 21 near her hometown for the more than 30-hour-long train ride, which took her straight to Agartala. The trip was unexpectedly easy and required no change of trains. Because of that, she decided to take a large amount of materials with her.

It was the greatest amount of materials she had ever taken on the train and filled three heavy suitcases and several heavy bags. Fortunately the space under the seats on the train was empty, as if just waiting for these precious materials, and not filled with other passengers’ luggage. This was even more astonishing since she got the last and only available seat on this train, which runs only once a week.

The materials consisted of many fliers in Bengali, Hindi, English, and other languages; bookmarks; 2022 Falun Dafa wall calendars; 2010 calendars that had been made into posters; copies of Zhuan Falun and Falun Gong in Bengali, Hindi, and English; other books such as The Slaughter, Unprecedented Persecution, Life and Hope Renewed, and Hearts and Mind Uplifted; Compassion and Minghui magazines; copies of The Minghui Report: 20 Years of Persecution; Shen Yun wall and table calendars, posters, brochures, and bookmarks; posters of all sizes about Falun Dafa and that clarified the truth; lotus flower keepsakes in various languages; Nine Commentaries on the Communist Party; and posters and banners to display at schools. 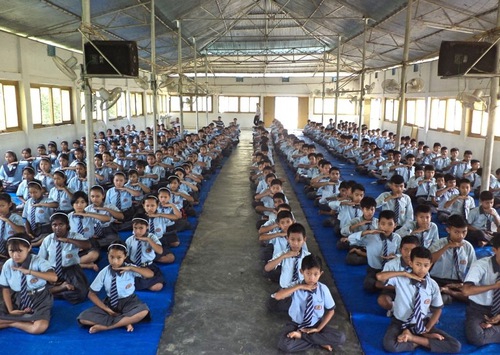 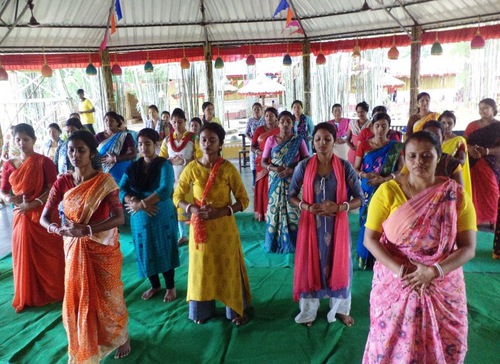 People in this remote area had never heard of Falun Dafa or how it is being persecuted in China. Only a few know how bad the Chinese Communist Party (CCP) is.

They are kind, honest, and helpful people. The practitioner met enthusiastic landlords who gave her contacts for the local schools. She was able to arrange classes to introduce Falun Dafa to many schools. Whether it was during exams, the summer break, or in the extreme heat and humidity, the classes went well. Some schools even held classes for teachers and parents.

Nearly everything that happened in this rather remote area—be it regarding schools, contacts, meeting people, making photocopies and laminating, or modes of transport such as auto rickshaws, cycle rickshaws, and buses—went smoothly.

When the practitioner arrived by bus or auto rickshaw, people immediately directed her to the next shared local auto and helpful hands loaded her luggage, which again often appeared as if it was prearranged.

In addition, throughout her stay, people seemed to constantly come up with their own ideas and initiatives, such as inviting her to other areas of Tripura, and they were willing to help her by giving her names of schools and places to visit and people to meet. The never-ending stream of ideas, suggestions, and help again seemed prearranged.

Without knowing the practitioner or Falun Dafa, some schools quickly agreed to have Falun Dafa classes and even organized visits to other schools. At two schools outside of Agartala, the person in charge even arranged a Falun Dafa session for the parents. It was very inspiring for the practitioner to see how many parents attended these two sessions in such remote areas where transportation was not easily available. 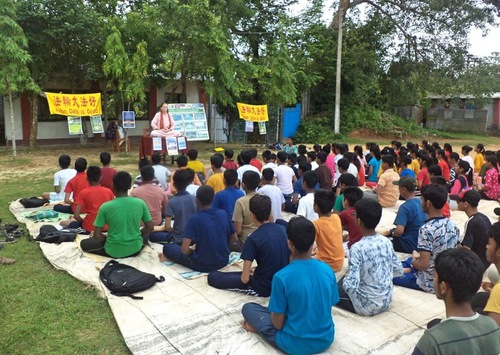 After being given Falun Dafa books and other materials for his school library, a principal said, “Many teachers are here today after the summer vacation. Let’s have a Falun Dafa class in the library.”

This was the most impromptu session the practitioner had ever conducted, with no posters or music. Not even the Falun Dafa exercise music on her phone was audible due to the sound of the fans. The place was small and there were too many chairs, but everyone present seemed happy to hear about Falun Dafa and learn to do some of the exercises.

The principal wrote the following letter of appreciation:

“Dear Madam, We are thankful to you for conducting a session on Falun Dafa in our school on 18/06/2022 for the esteemed members of the staff of the school. I would like to convey my heartfelt gratitude to you for conducting the session and also donating the books titled Falun Gong and Zhuan Falun in English, Hindi, and Bengali. We hope and believe that, in this world of stress, strain, and violence, the practice of Falun Dafa and the cultivation of truthfulness, compassion, and tolerance will help the students and staff to form a positive attitude and be good human beings. We consider the books to be invaluable to enrich our library. We graciously acknowledge the receipt of these books. I wish you all success in your mission and endeavor.”

Jiang Zemin, former head of the CCP, perceived the spiritual discipline’s growing popularity as a threat to the Party’s atheistic ideology and on July 20, 1999, he issued an order to eradicate the practice.