(Minghui.org) Falun Dafa practitioners held a rally across from the Prime Minister’s Office at No. 10 Downing Street, London, on December 11. Numerous members of Parliament sent letters in advance expressing their support. 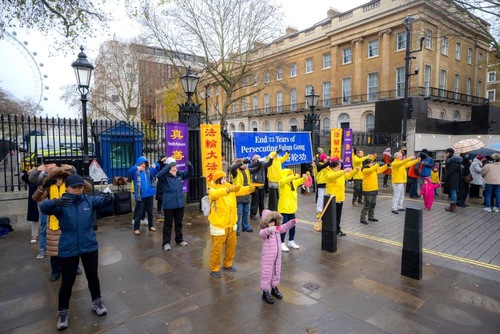 Representative of Falun Dafa Association: Say No to the Tyranny of the Chinese Communist Regime

Ms. Caroline, representative of the UK Falun Dafa Association, addressed the rally and said that from January to October this year, 14,374 Falun Gong practitioners are known to be arrested and tortured by the Chinese Communist Party (CCP).

She said that during the parliamentary debate on human rights held on Thursday, Sir Iain Duncan Smith pointed out that the human rights violations in China, “Are staggering, far more than all other countries. The degree, scale, and ferocity of the infringement are unprecedented in modern times.”

She said that Britain historically brought democracy, justice, and the rule of law to all corners of the world. The basic principles of the UK are based on fair competition and honesty. She encouraged everyone to work together and come forward for peace, honesty, compassion and tolerance.

She emphasised, “Let’s stick to our principles and say no to lies, killings, and CCP atrocities!”

Victoria spoke on behalf of ETAC at the rally. She said that at the request of the ETAC, the China Tribunal (an independent tribunal investigating allegations of forced organ harvesting from prisoners of conscience in China), conducted an in-depth investigation of the CCP’s organ harvesting for twelve months. The evidence confirms that Falun Gong practitioners and Uyghurs are the victims of crimes against humanity.

The China Tribunal pointed out that compared with the mass criminal killings during the twentieth century, the evilness of forced organ harvesting is unparalleled. Governments and international agencies must fulfill their responsibilities against this crime against humanity and possible genocide.

Victoria said after the China Tribunal’s ruling, people began to act. At the beginning of this year, the British government took the first legislative step against forced organ harvesting, banning the use of human organs that may be forcibly harvested in British medicine. This was thanks to the amendments to the Medicines and Medical Devices Act. With the help of Marie Rimmer MP (Member of Parliament), the amendments received cross-party support in the House of Lords.

Victoria also said that Lord Hunt proposed a bill to prevent people from going to China for organ tourism. The bill intends to prevent the UK from participating in the forced organ harvesting and to prevent commercial exhibitions of human bodies, which may include the bodies of prisoners of conscience in China. The bill has been read for the second time in the House of Lords.

Victoria also said that the Shadow Minister of Health, Alex Norris MP, proposed an amendment to the Health and Care Bill outlining the same legislative hopes as Lord Hunter. Marie Rimmer MP gathered the cross-party support for the amendment. The bill is now in the House of Lords.

Practitioners also received a statement from Amanda Milling MP, Minister of State for Asia, to Feryal Clark MP. In her letter, she stated that she was deeply concerned about China’s restrictions on freedom of religion or belief, including the persecution of Christians, Muslims, Buddhists, Falun Gong practitioners, and others. She pointed out that it is a universal human right for one to practice, change or share one’s own beliefs without discrimination or violence.

MP Milling stated that she would continue to monitor and review the evidence related to China’s forced organ harvesting, and maintain a dialogue with major NGOs and international partners on this issue.

A Practitioner Narrates the CCP’s Persecution of Her Mother

Practitioner Jane Li recounted the CCP’s 20-year persecution of her mother. Her mother was dismissed from work and imprisoned in the Hangzhou Women’s Prison for four years. Jane was only fifteen years old. After her mother was released, the harassment did not stop.

“In order to monitor what she did, the police erected a high pole with several surveillance cameras in front of my mother’s house,” said Jane, “In 2015, the police stopped the food and water supply to her house. They forced her to go to the brainwashing camp again.”

Jane, her husband, and one-year-old son visited her parents in China in July 2016. One day someone knocked on the door. Her mother opened the door and three people pushed their way in. They grabbed her and took her to a brainwashing center for 30 days.

She said that the Chinese Communist regime is a real threat to mankind. She hopes that more people will awaken and protect their values and freedom.

Support from the Public

During the rally many people stopped to talk with practitioners. They accepted leaflets, expressed their support for practitioners’ efforts to end the persecution and signed the petition. 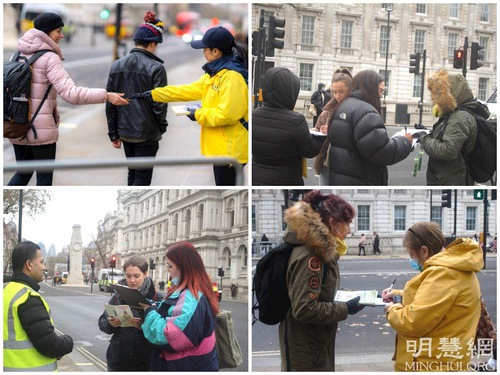 A man named Muhammad stopped and watched the rally. He said he lived in the UK for 15 years and knew about the CCP’s live organ harvesting.

He said, “I support you. I see these unfair things and I want to stop them. As long as those of us who see the truth will not give up, the Almighty will punish those demons sooner or later. I would like to join you.”

Background: What is Falun Dafa and Why is The CCP Persecuting It?

Millions of people who have embraced the teachings, which are based on the principles of Truthfulness, Compassion, and Forbearance, and learned the five gentle exercises and have experienced uplifted health and well-being.