Skip to content
Nov. 6, 2021 | By a Falun Dafa practitioner in Scotland

(Minghui.org) The 26th United Nations Climate Change Conference, also known as COP26, is being held in Glasgow, UK, from October 31 to November 12. Twenty-five thousand delegates from 200 countries and approximately 120 heads of state are expected to attend the conference.

Falun Dafa practitioners from Scotland and Northern England held activities near the main entrances to the conference to introduce Falun Dafa and to tell people about the persecution of the spiritual practice in China, including about the harvesting of practitioners’ organs while they are still alive. They called for an end to the Chinese Communist Party (CCP). Their peacefulness and perseverance drew the attention of several media, and security personnel voiced their support.

Practitioners set up displays and banners that read “Falun Dafa – Truthfulness-Compassion-Forbearance” and “Stop Forced Live Organ Harvesting of Falun Gong Practitioners” at one of the busiest entrances.

At the exercise demonstration on October 21, two practitioners distributed leaflets. Drawn by the exercise music, many people stopped to watch. Some read the display boards and asked questions.

Lewis Brackpool, a reporter from Canadian media Rebelnews, interviewed Rosemary, a practitioner, who told him that the CCP is responsible for the deaths of more than 80 million Chinese since it seized power. She also told him about the persecution of Falun Dafa practitioners who live by Truthfulness-Compassion-Forbearance. Rosemary said that she hopes the world will wake up to the CCP’s lies and hold the regime accountable for all of its crimes, including forced organ harvesting.

Mr. Brackpool also interviewed Ms. He. Mr. Brackpool told her that a Chinese girl had admonished him not to criticise China, and he wanted to know her opinion. Ms. He said, “It makes me sad to hear that. In Western countries, anyone can express their opinion freely. The Chinese Communist regime has done many bad things, and it prohibits anyone from reporting on them. In the meantime, it criticises other countries all the time, which is exactly its rogue nature.”

Another reporter was very interested in learning about Falun Dafa. On November 1, he interviewed Stepan, who talked about the rising concern of information filtering on some media, which prevents the spread of truth, including the facts about the persecution of Falun Dafa. A passerby who talked to practitioners for a long time was also interviewed.

Jane, a journalist reporting at the conference, told a practitioner that she saw many people in line reading the Falun Dafa flyers.

Support from the Security Staff

Falun Dafa’s principles of Truthfulness-Compassion-Forbearance and practitioners’ peacefulness and persistence also won the support of the security officers.

When the meeting opened on October 31, an officer read the leaflet he was handed and said that he heard about Falun Dafa years ago but did not expect the persecution to be so severe. He suggested that the practitioners distribute their flyers at the busiest entrance to reach more people. He also asked for more leaflets, which he said he would take home to his friends.

During the three days, practitioners were allowed to move their displays from the periphery to the busiest entrance and to have multiple boards side-by-side and banners instead of just one display board. 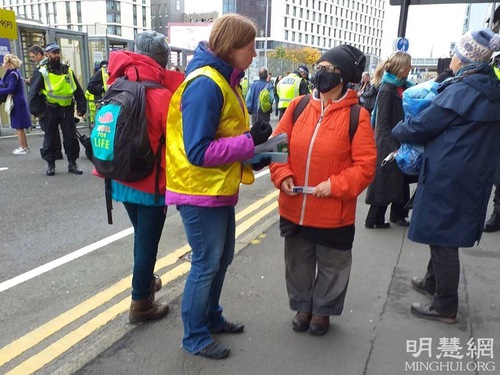 China Team Member: “I Support You.”

One man passed by twice without taking a flyer. When he passed by the third time, he walked up to a practitioner and said, “I work for a team from China, so I cannot take your flyer, but I’m very, very supportive of you.”

Another woman returned after reading the flyer and asked for more, saying that she was a teacher and wanted to take the information back to her students.

Practitioners said they would tell people about Falun Dafa every day during the conference to help more people learn how wonderful the practice is. They also hoped to raise more awareness of the persecution in China.

Millions of people who have embraced the teachings—which are based on the principles of Truthfulness, Compassion, Forbearance—and learned the five exercises have experienced uplifted health and well-being.