Practitioners in Brazil came together for a Falun Dafa Experience Sharing Conference and truth-clarifying activities in Curitiba, the capital of the southern Brazilian state of Paraná, on September 3 and 4, 2021.

This was the first experience sharing conference that some practitioners attended. New practitioners said what impressed them most was the pure and selfless mindset of Falun Dafa practitioners and how amazing cultivation is.

The participants expressed their appreciation to Teacher (the founder of Falun Dafa) for the opportunity to improve themselves. They said they would be more diligent in practicing and do more to clarify the truth to the public on the persecution of Falun Dafa at the hands of the Chinese Communist Party (CCP).

The coronavirus pandemic has had a huge impact on Brazil, and the government has implemented strict restrictions on gatherings. But the conference was held smoothly.

After learning about Falun Dafa, the manager of the hotel where the conference was held specially set up a table in the lobby. Informational booklets about Falun Dafa were placed on the table, so that all hotel guests had the opportunity to learn about the spiritual practice.

Curitiba is the seventh-largest city in Brazil and the largest city in southern Brazil. In addition to being the local cultural, political, and economic centre, Curitiba is also known for having more cloudy days than England—but during the conference, the sky was clear.

It is spring in the southern hemisphere, but the days were as warm as summer during the practitioners’ events. They held a series of truth-clarification activities to introduce Falun Dafa to the public and raise awareness of the Chinese Communist Party’s (CCP) persecution.

Practitioners held a candlelight vigil on the evening of September 3, to commemorate the practitioners who died as a result of the CCP’s persecution. Many passersby paused to take photos and to read display boards and banners. Some talked with practitioners to learn more about the 22-year-long persecution.

The practitioners did the exercises as a group on Praça do Japão square on the morning of September 4. Many local people and tourists paused to watch. Some learned the exercises.

During the events, many people asked for more information about Falun Dafa and the CCP’s persecution. Some asked how to learn Falun Dafa.

To spread Falun Dafa online, the practitioners made a video recording of a group practice. Many passers-by stopped to watch as they filmed.

Practitioners held group practice at Parque São Lourenço (park) on the afternoon of September 4. Some people learned the exercises during the event. 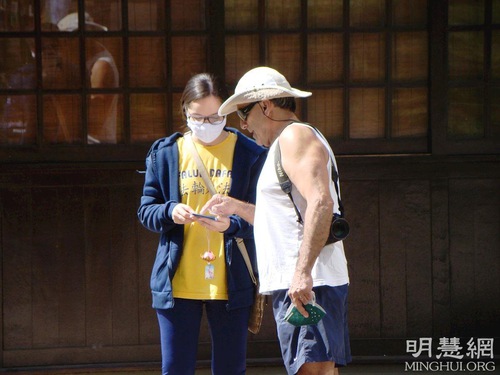 Falun Dafa (also known as Falun Gong) was first introduced to the public in 1992. Nearly 100 million people across China were soon practicing after experiencing improvements in their health and character.

Jiang Zemin, former head of the Chinese Communist Party (CCP), perceived the spiritual discipline’s growing popularity as a threat to the CCP’s atheistic ideology and issued an order to ban Falun Dafa on July 20, 1999.

Minghui.org has confirmed the deaths of thousands of practitioners in the persecution over the past 22 years; the actual number is suspected to be much higher. More have been imprisoned and tortured for their faith.