Falun Dafa practitioners held an event at the Vincas Kudirka Square in downtown Vilnius, Lithuania, on July 19, 2021, to introduce Falun Dafa and tell people about the persecution of their faith in China. The event received warm support from residents.

Practitioners set up an information booth and exhibit boards at the square. Some passersby immediately walked to the booth to add their names to a petition calling for criminal charges against former Chinese Communist Party (CCP) leader Jiang Zemin for initiating the persecution of Falun Dafa. Some said they had already signed their names on a petition calling for an end to the persecution. 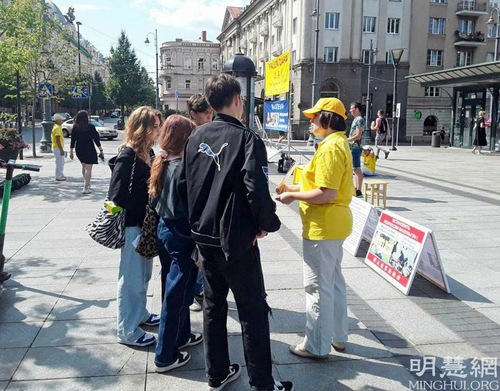 A young man who works at the Ministry of Foreign Affairs said the Lithuanian Parliament had passed a resolution a few months ago to strongly condemn the CCP’s crimes against humanity.

A teenager stopped by to look at what was happening. When a practitioner told him about the crimes that the CCP had committed, he said he was from Hong Kong and knew the CCP is evil. He immediately signed the petition to call for an end to the persecution.

An older man heard a practitioner talk about the CCP’s persecution and asked, “How is this different from when the Soviet Union governed this country? Those people who did not follow the communist ideology were deported or killed. They practiced the communist ideology, and they would kill people whom they do not like. This kind of tyrant act must stop.” 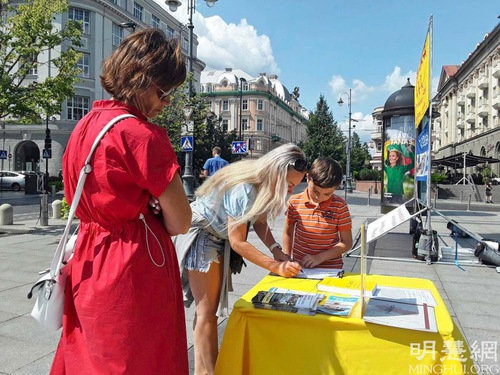 A young man who was interested in cultivation said he came to see if the cultivators here were truly cultivating or just doing the exercise movements. A practitioner shared his own cultivation experience, explaining that if one wants to achieve the intended effects of the exercises, he must first calm his mind. He also said that the exercises are for cultivating one’s physical state, while cultivating in Falun Dafa also requires one to cultivate one’s character (xinxing). This young man agreed and said, “Through practicing these exercises, you all are bringing pure, righteous energy to the world.”