Falun Dafa practitioners in Queensland held activities to celebrate World Falun Dafa Day at King George Square on Saturday, May 8, 2021. May 13, 2021 is the 29th anniversary of Falun Dafa’s public introduction and coincides with the founder’s, Mr. Li Hongzhi’s 70th birthday. 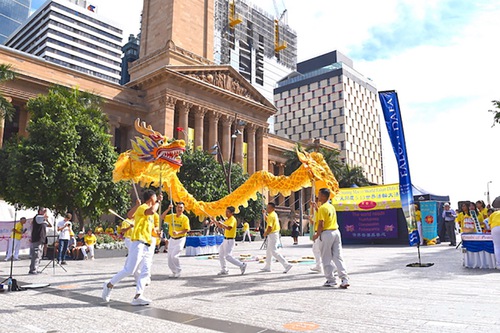 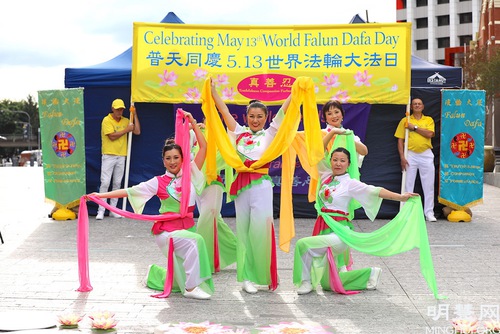 MP George Christensen joined the celebration. He thanked practitioners for bringing hope to China, and encouraged them to continue their efforts of spreading the teachings of Truthfulness-Compassion-Forbearance, because he said they are universal values.

The lawmaker also called on the Australian government to carry out the Global Magnitsky Human Rights Accountability Act and ban those who are involved in the persecution from entering Australia.

Dr. Cuong Bui, President of the Vietnamese Community in Australia’s Queensland Chapter, gave a speech at the event.

Louise Morrison received a Falun Dafa flyer in her mailbox in 1999. She was surprised to find what she had been looking for all her life. Once she started to do the exercises, she realised that Falun Dafa was very special and just like that, she began practicing.

Before she began practicing Falun Dafa, Louise was a yoga instructor. She had serious asthma and in high school she had to stay in the hospital for six months every year.

“I could not go to school or make friends,” she said. So, she looked for a way to heal her disease. She spent lots of money and time and tried many things, but none of them worked.

“After I began practicing Falun Dafa, I experienced great physical and spiritual changes. I am now healthy and full of energy.”

Louise began to apply the principles of Truthfulness-Compassion-Forbearance in her daily life.

“Falun Dafa has changed me. I’ve become more peaceful and rational. I can have better communications with my kids,” she said.

At the end of her speech, she thanked Master Li for renewing her life, and wished Master Li a happy birthday.