Over a thousand Falun Dafa practitioners held a rally in Flushing, the largest Chinese community in New York, on April 18, 2021, to commemorate a historic appeal to the Chinese government by practitioners on April 25, 1999.

Twenty-two years ago, ten thousand Falun Dafa practitioners gathered quietly in Beijing to demand the release of dozens of practitioners who had been arrested after speaking with editors at a magazine to correct an article that slandered their faith.

Erping Zhang, spokesperson for the Falun Dafa Information Centre, was the first to address the rally. He said, “Practitioners went to the Central Appeals Office in Beijing 22 years ago with great compassion and tolerance. But Jiang Zemin, the then head of the CCP, responded by initiating the brutal persecution. For more than 20 years, practitioners’ efforts to expose the persecution have awakened the world.”

He said, “I hope all people, Chinese and Western, will stand on the side of justice.”

Martha Flores-Vazquez, a community leader for the New York Democratic Party in Flushing, participated in the rally. She said, “I support Falun Dafa because it is good and it deserves our respect.”

She said, “We deliver a clear message here: The CCP must stop the persecution of Falun Gong! Falun Dafa is good!”

Celebrating 370 Million Chinese Who Have Quit the CCP

Rong Yi, Chair of the Global Service Centre for Quitting the CCP, said, “When we commemorate the April 25th appeal, we also celebrate the 370 million people who have quit the CCP and its affiliated organisations.”

Yi said, “For 22 years, countless Falun Gong practitioners have been subjected to the CCP’s inhuman persecution and have even had their organs removed while they were alive. But the CCP’s persecution does not alter practitioners’ belief in Truthfulness-Compassion-Forbearance. They keep exposing the persecution, raising awareness of the CCP’s evil nature, and clarifying the truth. Their efforts bring hope to a world in crisis.

“The publication of the Nine Commentaries on the Communist Party initiated the wave of people quitting the CCP. The international community has come to know how Communism harms the world. People of Hong Kong have shouted, ‘Heaven will destroy the CCP!’”

Caidong Shi, a former doctor at the Chinese Academy of Sciences, participated in the April 25 appeal. He was invited into Zhongnanhai, headquarters of the CCP, by then-Premier Zhu Rongji to discuss the reason for the appeal.

“The CCP has distorted history. Today, the world is suffering because of the CCP’s lies,” Shi said.

He listed the crimes the CCP has committed against the Chinese people since it came to power, as well as how the Party has distorted the narrative of World War II, the Great Famine, the Tiananmen Square Massacre, the rule of “one country, two systems” in Hong Kong, the persecution of Falun Gong, and now the coronavirus.

“The CCP threatens all people throughout the world,” he said. “If you know the true nature of the CCP, you will stay away from it.”

Friends of Falun Gong: People Should Stand Up and Say No to the CCP

Alan Adler, Chair of Friends of Falun Gong, said that as an American who has followed Falun Gong in the past 30 years, he saw how the CCP persecutes innocent people and has now extended its harm by allowing the coronavirus to spread. He called on people to say no to the CCP.

Independent Columnist: The World Should Unite and Eliminate the CCP

Bidong Ge, an independent columnist in California, traveled to New York to participate in the rally.

Ge said, “The persecution of Falun Gong is the biggest example of how the CCP tramples on human rights. Falun Gong practitioners are the kindest people in China but suffer the most brutal persecution, which is still ongoing.

“Today I come from afar and stand here to tell the world that continuing to tolerate such an evil regime is a shame and an embarrassment to society! We are here today to call on all the world’s righteous people to unite to eliminate the CCP and to return justice to society!”

Fayuan Chen is 16 years old. Her father Chen Yang is an engineer, and her mother Cao Zhimin is an English teacher. Police abducted them and seven other practitioners while they read Zhuan Falun, the main book of Falun Gong, together in Hunan Province on October 27, 2020. She said she has heard no news about her parents and worries about them.

Chen called on Chinese authorities to release her parents and other Falun Gong practitioners. “I hope the CCP police can learn the facts and stop participating in the persecution so they can have a better future,” she said.

Political Commentator: Destruction of the CCP is Inevitable

Tianxiao Li, a political science doctorate at Columbia University and a political commentator, said there was great power and significance behind the practitioners’ voices during the April 25 appeal. He said the moral power of Falun Gong has impacted huge numbers of people today.

Li said, “The April 25 appeal and practitioners’ persistent efforts to bring the truth to the publi have historic meaning.” He said that although the persecution is still going on, the final disintegration of the CCP is inevitable.

“The World Organisation to Investigate the Persecution of Falun Gong (WOIPFG) has collected a large amount of evidence for prosecuting the CCP criminals. Jiang Zemin and his faction are about to be placed on trial. The destruction of the CCP is not far away; instead, it is close at hand,” he said.

WOIPFG: Humanity Must Eliminate the CCP

Wang warned that the perpetrators of the persecution would face trial and punishment in the future.

“I Want to Make a Clean Break from the Evil CCP!”

Seven Chinese people renounced their memberships in the CCP and its youth organizations during the rally. Shisong Yang, a businessman from Henan Province, went to the rally specifically to announce his withdrawal from the Communist Youth League when he heard that there would be a ceremony.

He said that he used the software Freedom Gate to get around the Great Firewall in China and learn the truth. “I want to thank Falun Gong for this!” he said.

“It is a stain on my life that I joined the CCP’s Communist Youth League. This is a sin on my soul—a stain on my conscience and an injustice. So today I want to tell everyone openly, ‘I want to make a clean break from the evil CCP!’” 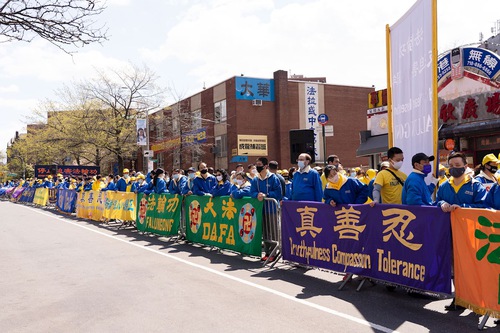